Dimethylformamide is an organic solvent for vinyl res ins and acetylene, butadiene and acid gases. It caused contact dermatitis in a technician at an epoxy resin manufacturers, and can provoke alcohol-induced flushing in exposed subjects. 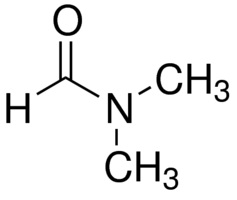 N,N-Dimethylformamide (DMF) is a clear liquid that has been widely used in industries as a solvent, an additive, or an intermediate because of its extensive miscibility with water and most common organic solvents.

ChEBI: A member of the class of formamides that is formamide in which the amino hydrogens are replaced by methyl groups.

Industrial production of N,N-Dimethylformamide (DMF) is via three separate processes (Eberling 1980). Dimethylamine in methanol is reacted with carbon monoxide in the presence of sodium methoxide or metal carbonyls at 110-150°C and high pressure. Alternately, methyl formate is produced from carbon monoxide and methanol under high pressure at 60-100°C in the presence of sodium methoxide. The resulting methyl formate is distilled and then reacted with dimethylamine at 80-100°C and low pressure. The third process involves reaction of carbon dioxide, hydrogen and dimethylamine in the presence of halogen-containing transition metal compounds to yield DMF.

Two processes are used commercially to produce dimethylformamide. In the direct or one-step process, dimethylamine and carbon monoxide react at 100°C and 200 psia in the presence of a sodium methoxide catalyst to make dimethylformamide. The homogenous catalyst is separated from the crude DMF, which is then refined to the final product. In the indirect process, methyl formate is isolated, and then reacted with dimethylamine to form DMF. To obtain methyl formate, two methods may be used - dehydrogenation of methanol and esterification of formic acid.

The acute toxicity of DMF is low by inhalation, ingestion, and skin contact. Contact with liquid DMF may cause eye and skin irritation. DMF is an excellent solvent for many toxic materials that are not ordinarily absorbed and can increase the hazard of these substances by skin contact. Exposure to high concentrations of DMF may lead to liver damage and other systemic effects. Dimethylformamide is listed by IARC in Group 2B ("possible human carcinogen"). It is not classified as a "select carcinogen" according to the criteria of the OSHA Laboratory Standard. No significant reproductive effects have been observed in animal tests. Repeated exposure to DMF may result in damage to the liver, kidneys, and cardiovascular system

DMF is a combustible liquid (NFPA rating = 2). Vapors are heavier than air and may travel to source of ignition and flash back. DMF vapor forms explosive mixtures with air at concentrations of 2.2 to 15.2% (by volume). Carbon dioxide or dry chemical extinguishers should be used to fight DMF fires.

World production capacity of DMF is about 225 x 103 tons per year. The main application of DMF is as solvent in industrial processes, especially for polar polymers such as Polyvinylchloride, polyacrylonitrile and polyurethanes. DMF solutions of high molecular weight polymers are processed to fibers, films, surface coatings and synthetic leathers. Since salts can be dissolved and dissociated in DMF, the solutions are used in electrolytic capacitors and certain electrolytic processes (Eberling 1980).

This is an organic solvent for vinyl resins and acetylene, butadiene, and acid gases. It caused contact dermatitis in a technician at an epoxy resin factory and can provoke alcohol-induced flushing in exposed subjects.

N,N-Dimethylformamide is predominantly produced in a single-step reaction between dimethylamine and carbon monoxide under pressure at high temperatures and in the presence of basic catalysts such as sodium methoxide. The crude product contains methanol and N,N-dimethylformamide with increased purity (up to 99.9%) is obtained by multiple distillations. Alternatively, it can be produced by a two-step process in which methyl formate is prepared separately and, in a second step, reacts with dimethylamine under similar conditions as those described for the single-step reaction. No catalysts are involved in the process.

DMF is not carcinogenic to animals except under very high inhalation exposure conditions. No increase in tumors was seen in rats that inhaled 25, 100, or 400 ppm for 6 h/day, 5 days/week for 2 years. Similarly, no tumors were produced in mice under the same conditions for 18 months. In that chronic experiment, rats and mice were exposed by inhalation (6 h/day, 5 days/week) to 0, 25, 100, or 400 ppm DMF for 18 months (mice) or 2 years (rats). Body weights of rats exposed to 100 (males only) and 400 ppm were reduced and, conversely, body weights were increased in 400 ppm mice. Serum sorbitol dehydrogenase activity was increased in rats exposed to 100 or 400 ppm. DMF-related morphological changes in rats were observed only in the liver and consisted of increased relative liver weights, centrilobular hepatocellular hypertrophy, lipofuscin/hemosiderin accumulation in Kupffer cells, and centrilobular single cell necrosis (400 ppm only). The same liver effects were seen in all groups of mice, although the response at 25 ppm was judged as minimal.

Biological. Incubation of [14C]N,N-dimethylformamide (0.1–100 μg/L) in natural seawater resulted in the compound mineralizing to carbon dioxide. The rate of carbon dioxide formation was inversely proportional to the initial concentration (Ursin, 1985).
Chemical. Reacts with acids or bases forming formic acid and dimethylamine (BASF, 1999)

Three urinary metabolites are identified in humans and rodents, and the metabolites quantified are N- (hydroxymethyl)-N-methylformamide (HMMF), resulting in N-methylformamide (NMF) and N-acetyl-S-(N- methylcarbamoyl)cysteine (AMCC). Ten volunteers who absorb between 28 and 60 mmol/kg DMF during an 8 h exposure to DMF in air at 6 mg=m3 excrete in the urine within 72 h between 16.1 and 48.7% of the dose as HMMF, between 8.3 and 23.9% as formamide, and between 9.7 and 22.8% as AMCC. AMCC together with HMMF is also detected in the urine of workers after occupational exposure to DMF. There is a quantitative difference between the metabolic pathway of DMF to AMCC in humans and rodents.

DMF should be used only in areas free of ignition sources, and quantities greater than 1 liter should be stored in tightly sealed metal containers in areas separate from oxidizers.

DMF decomposes slightly at its normal boiling point to give small amounts of dimethylamine and carbon monoxide. The decomposition is catalysed by acidic or basic materials, so that even at room temperature DMF is appreciably decomposed if allowed to stand for several hours with solid KOH, NaOH or CaH2. If these reagents are used as dehydrating agents, therefore, they should not be refluxed with the DMF. Use of CaSO4, MgSO4, silica gel or Linde type 4A molecular sieves is preferable, followed by distillation under reduced pressure. This procedure is adequate for most laboratory purposes. Larger amounts of water can be removed by azeotropic distillation with *benzene (10% v/v, previously dried over CaH2), at atmospheric pressure: water and *benzene distil below 80o. The liquid remaining in the distillation flask is further dried by adding MgSO4 (previously ignited overnight at 300-400o) to give 25g/L. After shaking for one day, a further quantity of MgSO4 is added, and the DMF is distillied at 15-20mm pressure through a 3-ft vacuum-jacketed column packed with steel helices. However, MgSO4 is an inefficient drying agent, leaving about 0.01M water in the final DMF. More efficient drying (to around 0.001-0.007M water) is achieved by standing with powdered BaO, followed by decanting before distillation, then with alumina powder (50g/L, previously heated overnight to 500-600o), and distilling from more of the alumina, or by refluxing at 120-140o for 24hours with triphenylchlorosilane (5-10g/L), then distilling at ca 5mm pressure [Thomas & Rochow J Am Chem Soc 79 1843 1957]. Free amine in DMF can be detected by the colour reaction with 1-fluoro-2,4-dinitrobenzene. It has also been purified by drying overnight over KOH pellets and then distilling from BaO through a 10 cm Vigreux column (p 11) [Jasiewicz et al. Exp Cell Res 100 213 1976]. [For efficiency of desiccants in drying dimethylformamide see Burfield & Smithers J Org Chem 43 3966 1978, and for a review on purification, tests of purity and physical properties, see Juillard Pure Appl Chem 49 885 1977.] It has been purified by distilling from K2CO3 under high vacuum and fractionated in an all-glass apparatus. The middle fraction is collected, degassed (seven or eight freeze-thaw cycles) and redistilled under as high a vacuum as possible [Mohammad & Kosower J Am Chem Soc 93 2713 1971]. [Beilstein 4 IV 171.] Rapid purification: Stir over CaH2 (5% w/v) overnight, filter, then distil at 20mmHg. Store the distilled DMF over 3A or 4A molecular sieves. For solid phase synthesis, the DMF used must be of high quality and free from amines.

Though stable at normal temperatures and storage conditions, DMF may react violently with halogens, acyl halides, strong oxidizers, and polyhalogenated compounds in the presence of iron. Decomposition products include toxic gases and vapors such as dimethylamine and carbon monoxide. DMF will attack some forms of plastics, rubber, and coatings.

Excess DMF and waste material containing this substance should be placed in an appropriate container, clearly labeled, and handled according to your institution's waste disposal guidelines.