Osmium was discovered by English chemist Smithson Tennant in 1804. The element was named osmium after the Greek word, osme, which means a smell, because of the pungent and peculiar odor of its volatile oxide.
Osmium occurs in nature, always associated with other platinum group metals. It usually is found in lesser abundance than other noble metals. Its most important mineral is osmiridium (or iridosmine), a naturally occurring mineral alloyed with iridium.
The commercial applications of osmium are limited and considerably fewer than other platinum group metals. Its alloys are very hard and are used to make tips of fountain-pen nibs, phonograph needles, and pivots. The metal also exhibits effective catalytic properties in hydrogenation and other organic reactions. Such catalytic applications, however, are limited and osmium fails to replace other noble metals, particularly palladium and platinum, which are more effective as catalysts and cost less.

Osmium is a hard, brittle, bluishwhite metal with a BP of 5012 °C (Lide, 2006). It has the distinction of being the element in the PGE, which has the highest BP and lowest vapor pressure (Lide, 2006). Its physical characteristics make it difficult to manipulate; therefore, osmium is primarily used in the creation of alloys with other PGE, notably platinum and palladium. 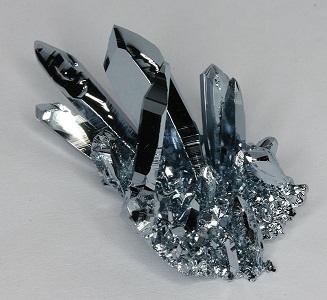 Osmium is silvery white, hard transition metals with a high melting point. osmium is one of the rarest elements on earth.

Osmium is a blue－white metal. It is found in platinum ores and in the naturally occurring alloy osmiridium. Osmium when heated in air or when the finely divided form is exposed to air at room temperature, oxidizes to form the tetroxide (OsO4), osmic acid. Osmium tetraoxide is a colorless, crystalline solid or pale-yellow mass. Unpleasant, acrid, chlorine-like odor. A liquid above 41°C.

One of the important properties of osmium is the formation of gases when the metal isexposed to air. These fumes are extremely toxic, which limits osmium’s usefulness. Osmium is ahard, tough, brittle, bluish-white metal that is difficult to use except in a powder form that oxidizesinto osmium tetroxide (OsO4), which not only has objectionable odor but also is toxic.
Osmium has a relatively high melting point of 3,054°C and a boiling point of 5,500°C,with a density of 22.61 g/cm3.

Its name is derived from the Greek word osme, meaning “odor” or “smell,” because of the element’s objectionable smell when it is first isolated from platinum ores using aqua regia.

Osmium is the 80th most abundant element on Earth. As a metal, it is not found free innature and is considered a companion metal with iridium. It is also found mixed with platinum-and nickel-bearing ores. It is recovered by treating the concentrated residue of these oreswith aqua regia (a mixture of 75% HCl and 25% HNO). The high cost of refining osmium ismade economically feasible by also recovering marketable amounts of platinum and nickel.
Osmium occurs along with iridium in nature as the mineral iridosmine. It is found inCanada, Russia, and parts of Africa.

Osmium is found in group 8 (VIII) of the periodic table and has some of the same chemical,physical, and historical characteristics as several other elements. This group of similarelements is classed as the platinum group, which includes Ru, Rh, and Pd of the second transitionseries and Os, Ir, and Pt of the third series of transition metals .

Discovered in 1803 by Tennant in the residue left when crude platinum is dissolved by aqua regia. Osmium occurs in iridosmine and in platinum-bearing river sands of the Urals, North America, and South America. It is also found in the nickel-bearing ores of the Sudbury, Ontario, region along with other platinum metals. While the quantity of platinum metals in these ores is very small, the large tonnages of nickel ores processed make commercial recovery possible. The metal is lustrous, bluish white, extremely hard, and brittle even at high temperatures. It has the highest melting point and the lowest vapor pressure of the platinum group. The metal is very difficult to fabricate, but the powder can be sintered in a hydrogen atmosphere at a temperature of 2000°C. The solid metal is not affected by air at room temperature, but the powdered or spongy metal slowly gives off osmium tetroxide, which is a powerful oxidizing agent and has a strong smell. The tetroxide is highly toxic, and boils at 130°C (760 mm). Concentrations in air as low as 10–7 g/m3 can cause lung congestion, skin damage, or eye damage. The tetroxide has been used to detect fingerprints and to stain fatty tissue for microscope slides. The metal is almost entirely used to produce very hard alloys, with other metals of the platinum group, for fountain pen tips, instrument pivots, phonograph needles, and electrical contacts. The price of 99.9% pure osmium powder — the form usually supplied commercially — is about $100/g, depending on quantity and supplier. Natural osmium contains seven isotopes, one of which, 186Os, is radioactive with a very long half-life. Thirty-four other isotopes and isomers are known, all of which are radioactive. The measured densities of iridium and osmium seem to indicate that osmium is slightly more dense than iridium, so osmium has generally been credited with being the heaviest known element. Calculations of the density from the space lattice, which may be more reliable for these elements than actual measurements, however, give a density of 22.65 for iridium compared to 22.61 for osmium. At present, therefore, we know either iridium or osmium is the heaviest element, but the data do not allow selection between the two.

Because of its hard brittle nature, the metal osmium has few uses. However, the powderedform can be sintered under high pressure and temperatures to form some useful products,despite its toxicity and malodor. Its main use is as an alloy to manufacture devices that resistwear and stand up to constant use. As an alloy, osmium loses both its foul odor and toxicity.Some of these products are ballpoint and fountain pen tips, needles for record players, andpivot points for compass needles. Osmium alloys are also used for contact points on specialswitches and other devices that require reduced frictional wear.
Another use is as a stain for animal tissues that are to be examined with a microscope toimprove the contrast of the specimen.

Osmium is obtained in the reaction of osmium tetroxide (OsO4) reduction with carbon at red heat temperature. Osmium is also obtained from osmiridium. After separation from other metals with aqua regia, osmiridium is distilled in chlorine stream with formation of osmium tetrachloride (OsCl4), from which the metal is recovered by reduction.

Most of the oxides of osmium are not noxious, but are toxic if inhaled or ingested. Thecompound OsO4 is extremely poisonous. It is a powerful oxidizing agent that is soluble inwater and will produce serious burns in skin as it oxidizes the various layers of tissues.

A platinum-group metal, osmium is noted for its high hardness, about 400 Brinell. The heaviest known metal, it has a high specific gravity, 22.65, and a high melting point, 2698 C. The boiling point is about 5468 C. Osmium has a close-packed hexagonal crystal structure, and forms solid-solution alloys with platinum, having more than double the hardening power of iridium in platinum. However, it is seldom used to replace iridium as a hardener except for fountain-pen tips where the alloy is called osmiridium.
Osmium is not affected by the common acids, and is not dissolved by aqua regia. It is practically unworkable, and its chief use is as a catalyst.
Osmium tetraoxide, a commercially available yellow solid (melting point 40 C) is used commercially as a stain for tissue in microscopy. It is poisonous and attacks the eyes. Osmium metal is catalytically active, but it is not commonly used for this purpose because of its high price. Osmium and its alloys are hard and resistant to corrosion and wear (particularly to rubbing wear). Alloyed with other platinum metals, osmium has been used in needles for record players, fountain-pen tips, and mechanical parts.

Poison by intravenous route. An irritant to eyes and mucous membranes. The principal effects of exposure are ocular disturbances and an asthmatic condition caused by inhalation. Furthermore, it causes dermatitis and ulceration of the skin upon contact. When osmium is heated, it gives off a pungent, poisonous fume of osmium tetroxide. One case of osmium poisoning reported in the literature resulted from the inhalation of osmium, which gave rise to a capillary bronchitis and dermatitis. The tetroxide vapor has a pronounced and nauseating odor that should be taken as a warning of a possibly toxic concentration in the atmosphere, and personnel should immedately move to an area of fresh air. The metal itself is not highly toxic. Flammable in the form of dust when exposed to heat or flame. Slight explosion hazard in the form of dust when exposed to heat or flame. Violent reaction or ignition with chlorine trichloride or oxygen dfluoride. Ignites when heated to l00℃ with fluorine. Incandescent reaction in phosphorus vapor. When heated to decomposition it emits toxic fumes of 0s04. See also OSMIUM TETROXIDE

Osmium may be alloyed with platinum metals, iron, cobalt, and nickel; and it forms compounds withtin and zinc. The alloy with iridium is used in the manufacture of fountain pen points, engraving tool; record player needles; electrical contacts; compass needles; fine machine bearings; and parts for watch and lock mechanisms. The metal is a catalyst in the synthesis of ammonia; and in the dehydrogenation of organic compounds. It is also used as a stain for histological examination of tissues. Osmium tetroxide is used as an oxidizing agent, catalyst, and as a fixative for tissues in electron microscopy. Other osmium compounds find use in photography. Osmium no longer is used in incandescent lights or in fingerprinting.