Carbofuran is a broad-spectrum carbamate insecticide and nematocide. It is an odourless, white crystalline solid. On heating, its breakdown can release toxic fumes and irritating or poisonous gases. It is sparingly soluble in water but very soluble in acetone, acetonitrile, benzene, and cyclohexone. The liquid formulations of carbofuran are classified as restricted use pesticides (RUP) because of their acute oral and inhalation toxicity to humans. Granular formulations are also classified as RUP. 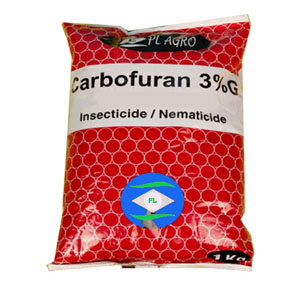 In fact, carbofuran was first registered in the United States in 1969 and classified as RUP. Exposure to heat breaks down carbofuran, with the release of toxic fumes. Carbofuran is used for the control of soil-dwelling and foliar-feeding insects. It is also used for the control of aphids, thrips, and nematodes that attack vegetable, ornamental plants, crops of sunflower, potatoes, peanuts, soybeans, sugar cane, cotton, rice, and variety of other crops.

Carbofuran is a white crystal-like solid. It is slightly soluble in water, is stable under neutral and acidic conditions, but decomposes under alkaline conditions (U.S. EPA,2006a).

Carbofuran is a broad-spectrum N-methyl carbamate sold under the trade name Furadan. First registered in 1969, it is used to control a variety of insect pests on field, fruit, and vegetable crops. Carbofuran is not used in residential settings or food-handling establishments. The chemical is a restricted use pesticide with nearly 1 million pounds of active ingredient almost exclusively used on corn, alfalfa, and potatoes (U.S. EPA, 2006a).

Carbofuran is highly mobile in soils and can leach into groundwater and enters surface water as runoff. The chemical breaks down though hydrolysis, photodegradation, and moderate bacterial degradation at rates that depend on environmental conditions. Hydrolysis is faster in water with a pH 7, with a half-life ranging from a few hours to 28 days. Carbofuran is stable to hydrolysis in acidic water. Photodegradation is fast in a thin water layer, with a halflife of 6 days. In the top few millimeters of a sandy loam soil, carbofuran degrades in 78 days. Bioconcentration is not expected to occur (U.S. EPA, 2006a).

Carbofuran is a broad-spectrum carbamate insecticide and nematicide. It is an odorless, white crystalline solid. On heating, it breaks down and can release toxic fumes, and irritating or poisonous gases. It is sparingly soluble in water, but very soluble in acetone, acetonitrile, benzene, and cyclohexone. The liquid formulations of carbofuran are classifi ed as RUPs because of their acute oral and inhalation toxicity to humans. Granular formulations are also classifi ed as an RUP. In fact, carbofuran was fi rst registered in the United States in 1969 and classifi ed as an RUP. Exposure to heat breaks down carbofuran, with the release of toxic fumes. Carbofuran is used for the control of soil-dwelling and foliar-feeding insects. It is also used for the control of aphids, thrips, and nematodes that attack vegetables, ornamental plants, crops of sunfl ower, potatoes, peanuts, soybeans, sugar cane, cotton, rice, and a variety of other crops

Carbofuran is used to control soil-dwelling insect pests and nematodes in a wide range of crops.

Carbofuran is an odorless white crystalline solid. Contact with skin may burn skin and eyes. When exposed to heat or flames Carbofuran may emit toxic oxides of nitrogen. Carbofuran is toxic by inhalation, skin contact, and/ or ingestion. Carbofuran is used as a pesticide.

The acute oral LD50 of carbofuran to male and female rats is about 8 mg/kg, while the acute dermal LD50 for rats is more than 3000 mg/kg. Carbofuran is mildly irritating to the eyes and skin of rabbits. The acute inhalation toxicity (LC50, 4 h) is 0.075 mg/L for rats. As with other carbamate compounds, carbofuran’s cholinesterase-inhibiting effect is short term and reversible. The symptoms of carbofuran poisoning include, but are not limited to, nausea, vomiting, abdominal cramps, sweating, diarrhea, excessive salivation, weakness, imbalance, blurring of vision, breathing diffi culty, increased blood pressure, and incontinence. Death may result at high doses from respiratory system failure associated with carbofuran exposure. Complete recovery from an acute poisoning by carbofuran, with no long-term health effects, is possible if exposure ceases and the victim has time to regain his or her normal level of cholinesterase and to recover from symptoms. Reports have indicated that risks from exposure to carbofuran are especially high among occupational workers and general public suffering with asthma, diabetes, cardiovascular disease, gastrointestinal or urogenital tracts disturbances. The available studies indicate carbofuran is unlikely to cause reproductive effects in humans at expected exposure levels. Studies indicate carbofuran is not teratogenic. No signifi cant teratogenic effects have been found in the offspring of rats given carbofuran (3 mg/kg/day) on days 5 to 19 of gestation.

May release nitrogen oxides. Containers may explode in heat of fire. Avoid alkalies. Stable under neutral or acid conditions.

Insecticide, Acaricide, Nematicide: Carbofuran is a broad-spectrum carbamate pesticide that kills insects, mites, and nematodes on contact or after ingestion. It is used against soil and foliar pests of field, fruit, vegetable, and forest crops. Carbofuran, granule form, is banned in the U.S. A U.S. EPA restricted Use Pesticide (RUP). Not approved for use in EU countries. There are 40 global suppliers.. According to the Ecological Incident Investigation System, carbofuran has been responsible for more avian deaths than any other pesticide.

It is a pesticide with insecticide properties, of the carbamate group. It was implicated as a sensitizer in two farmers

to decomposition it emits toxic fumes of

A potential danger to those involved in the manufacture, formulation, and application of this insecticide, acaricide, and nematocide.

Carbofuran is soluble in water and is moderately persistent in soil. Its half-life is 30–120 days. It enters surface water as a result of runoff from treated fields and enters groundwater by leaching of treated crops. If released to soil, degradation occurs by chemical hydrolysis and biodegradation. The persistence of carbofuran in the soil increases as the clay and organic matter content of the soil increase, and as the pH and moisture content of soil decrease. Chemical hydrolysis occurs more rapidly in alkaline soil as compared to neutral or acidic soils. Carbofuran is likely to leach to groundwater in soils with low organic content. Volatilization from soil is not expected to be significant, although some evaporation from plants may occur. If released to water, carbofuran degrades by hydrolysis under alkaline conditions and by biodegradation. Aquatic volatilization, adsorption, and bioconcentration are not expected to be important.

The fate of carbofuran has been investigated in soils, plants, mammals, birds, fish and insects. Metabolic pathways include hydrolysis, oxidation (ring and N-methyl hydroxylation) and conjugation. The metabolism of carbofuran has been extensively reviewed by Schlagbauer and Schlagbauer (1972) and Kuhr and Dorough (1976). Metabolism in economic animals was reviewed by Akhtar (1985). Consequently the many primary publications are not usually cited.

Carbofuran should be stored in a cool, dry, well-ventilated place, in their original containers only. It should not be kept stored or used near heat, open flame, or hot surfaces

Carbofuran (1) is very stable in weakly acidic media and has a DT50 of <1 year at pH 4 (22°C). It is stable in neutral media but unstable in basic conditions (PM). Carbofuran was hydrolysed to the phenol (5) with a half-life of 67 minutes at 37.5 °C at pH 9.5. 3-Ketocarbofuran (3) and N-hydroxymethylcarbofuran (4) (Scheme 2) were hydrolysed faster than carbofuran in alkaline solution (Metcalf et al., 1968). Unlabelled carbofuran was dissolved in water and irradiated by sunlight in India for 30 days. Samples were extracted and analysed by GC and TLC.
Products were 3-ketocarbofuran (3) and the 4-hydroxycarbofuran phenol (8). (Raha and Das, 1990). Solid carbofuran was applied to glass plates and irradiated with fluorescent light or sunlight. 3-Hydroxycarbofuran (2) was detected after 2 days; 3-ketocarbofuran (3) was not detected (Metcalf et al., 1968). These pathways are illustrated in Scheme 1.

Alkaline hydrolysis is the recommended mode of disposal. In accordance with 40CFR165, follow recommendations for the disposal of pesticides and pesticide containers. Must be disposed properly by following package label directions or by contacting your local or federal environmental control agency, or by contacting your regional EPA office.

During use/handling of carbofuran, workers should wear coveralls or a long-sleeved uniform, head covering, and chemical protective gloves made of materials such as rubber, neoprene, or nitrile. Occupational workers should know that areas treated with carbofuran are hazardous. The runoff of carbofuran material and the fi re control releases irritating or poisonous gases. It is advisable that workers should enter storehouses or carbofuran-treated close spaces with caution