Sodium percarbonate is a white granular powder of sodium carbonate and hydrogen peroxide. 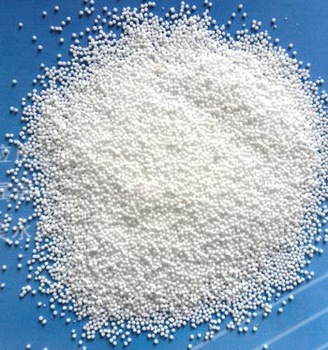 Sodium percarbonate is mainly used as a bleaching chemical in laundry detergents (tablets, compact or regular powders), laundry additives and machine dishwashing products. It is an oxidizing agent and ingredient in a number of home and laundry cleaning products, including eco-friendly bleach products such as OxiClean and Tide laundry detergent. Dissolved in water, it releases hydrogen peroxide and soda ash (sodium carbonate):
2(Na2CO31.5H202)→2Na2CO3+3H202

Sodium percarbonate naturally decomposes, very slowly, to form sodium carbonate and hydrogen peroxide. The hydrogen peroxide may further decompose to form water and oxygen and liberate some heat. The decomposition proceeds according to the reaction below:
2Na2CO3 • 3H2O2 → 2Na2CO3 + 3H2O + 1.5 O2 + Heat

A colorless, crystalline solid. Denser than water. May combust in contact with organic materials. Contact may irritate skin, eyes and mucous membranes. May be toxic by ingestion. Used to make other chemicals.

Oxidizing agents, such as SODIUM PERCARBONATE, can react with reducing agents to generate heat and products that may be gaseous (causing pressurization of closed containers). The products may themselves be capable of further reactions (such as combustion in the air). The chemical reduction of materials in this group can be rapid or even explosive, but often requires initiation (heat, spark, catalyst, addition of a solvent). Explosive mixtures of inorganic oxidizing agents with reducing agents often persist unchanged for long periods if initiation is prevented. Such systems are typically mixtures of solids, but may involve any combination of physical states. Some inorganic oxidizing agents are salts of metals that are soluble in water; dissolution dilutes but does not nullify the oxidizing power of such materials. Organic compounds, in general, have some reducing power and can in principle react with compounds in this class. Actual reactivity varies greatly with the identity of the organic compound. Inorganic oxidizing agents can react violently with active metals, cyanides, esters, and thiocyanates.

Inhalation, ingestion or contact (skin, eyes) with vapors or substance may cause severe injury, burns or death. Fire may produce irritating, corrosive and/or toxic gases. Runoff from fire control or dilution water may cause pollution.

Moderately toxic by ingestion. When heated to decomposition it emits acrid smoke and irritating vapors

Sodium percarbonate is not persistent in the environment and readily decomposes to soda ash (sodium carbonate) and hydrogen peroxide which will subsequently decompose to water and oxygen when exposed to soils, sediments, and surface or ground waters.