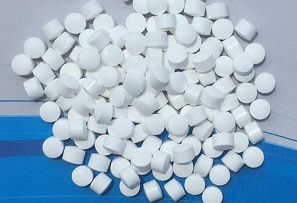 Chlorine dioxide,CI02, is a yellow-reddish gas.It is a very effective bleaching and water treatment agent. Chlorine dioxide is preparedby the reaction of chlorine and sodium chlorite. It is quite unstable and is commonly prepared immediately before use.

Chlorine dioxide is a flammable, reddishyellow gas, or reddish-brown liquid (below 11C/52F) with an irritating odor like chlorine or nitric acid.

Chlorine Dioxide is a gas used in bleaching and aging flour. it acts on the flour almost instantly, resulting in improved color and dough properties. because usage levels are low, the bleaching action is limited.

Chlorine dioxide is used for several purposes,including its applications as a bleachingagent to bleach fats, oils, textiles, cellulose,paper pulp, flour, and leather. It is also usedfor purifying water; as an oxidizing agent;as an antiseptic; and in the manufacture ofmany chlorite salts.

An orange gas formed by the action of concentrated sulfuric acid on potassium chlorate. It is a powerful oxidizing agent and its explosive properties in the presence of a reducing agent were used to make one of the first matches. It is widely used in the purification of water and as a bleach in the flour and wood-pulp industry. On an industrial scale an aqueous solution of chlorine dioxide is made by passing nitrogen dioxide up a tower packed with a fused mixture of aluminum oxide and clay, down which a solution of sodium chlorate flows.

chlorine dioxide: A yellowish-redexplosive gas, ClO2; d. 3.09 g dm–3;m.p. –59.5°C; b.p. 9.9°C. It is solublein cold water but decomposed by hotwater to give chloric(VII) acid, chlorine,and oxygen. Because of its highreactivity, chlorine dioxide is bestprepared by the reaction of sodiumchlorate and moist oxalic acid at90°–100°C, as the product is then dilutedby liberated carbon dioxide.Commercially the gas is produced bythe reaction of sulphuric acid containingchloride ions with sulphurdioxide. Chlorine dioxide is widelyused as a bleach in flour milling andin wood pulping and also finds applicationin water purification.

Chlorine dioxide is manufactured from the oxidation of chlorite or the reduction of chlorate. The latter method is used for large-volume production and is carried out in strongly acidic solution using reducing agents such as NaCl, HCl, sulfur dioxide, and methanol.

Chlorine dioxide is highly irritating to theeyes, nose, and throat. Inhalation can causecoughing, wheezing, respiratory distress, andcongestion in the lungs. Its toxicity inhumans is moderate to high. Its irritanteffects in humans can be intense at a con centration level of 5 ppm in air. A concen tration of 19 ppm of the gas inside a bleachtank caused the death of one worker (Elkins 1959). The chronic toxicity signs are mainlydyspnea and asthmatic bronchitis, and in cer tain cases irritation of the gastrointestinaltract. Ingestion of the liquid may cause som nolence and respiratory stimulation.

Nonflammable gas; however, it is highly reactive and a strong oxidizing agent. Chlo rine dioxide explodes violently upon heating, exposure to sunlight, contact with dust, or when subjected to a spark. Detonation occurs at concentrations above 10% in air in the presence of an energy source or catalyst. It undergoes violent reactions with organic matter; explosion occurs when the mixture is subjected to shock or a spark. It reacts spon taneously with sulfur or phosphorus, caus ing ignition and/or explosion. Liquid chlorine dioxide may explode violently when mixed with mercury, caustic potash, caustic soda, or many metal hydrides. The gas reacts explo sively with fluorine and with difluoroamine (Lawless and Smith 1968).

Chlorine dioxide is used in bleaching cellulose pulp; bleaching flour; water purification; as a liquid sterilizer in an ultrasonic cleaner.

UN/NA 9191 Chlorine dioxide, hydrate, frozen, Hazard class: 5.1; Labels: 5.1-Oxidizer, 6.1-Poison Inhalation. Explosive: It may only be shipped in the frozen state and then only by private or contract motor carrier.

Unstable in light. A powerful oxidizer. Chlorine dioxide gas is explosive at concentrations over 10% and can be ignited by almost any form of energy, including sunlight, heat (explosions can occur in air in temperature above 130C), or sparks, shock, friction, or concussion. This chemical reacts violently with dust, combustible materials; and reducing agents. Reacts violently with mercury, phosphorus, sulfur, and many compounds, causing fire and explosion hazard. Contact with water forms perchloric and hydrochloric acid. Corrosive to metals.

Use large volume of concentrated solution of ferrous salt or bisulfite solution as reducing agent. Then neutralize and flush to sewer with abundant water.