Calcium carbide (molecule formula: CaC2), is a kind of important chemical raw materials produced from the chemical processing of limestone. In 1892, H. Maysan (French) and H. Wilson (United state) simultaneously developed a calcium carbide production approach based on furnace Reduction. The United State had successfully achieved industrial production in 1895. The property of calcium carbide is related to its purity. Its industrial product is mostly the mixture of calcium carbide and calcium oxide, and also contains trace amounts of sulfur, phosphorus, nitrogen and other impurities. With the increasing content of impurities, it color exhibits gray, brown to black. The melting point and electrical conductivity both decrease with the decrease of the purity. The purity of its industrial product is usually 80% with m.p. being 1800~2000 °C. At room temperature, it does not react with air, but it can have oxidation reaction at above 350 ℃, and have reaction with nitrogen at 600~700 ℃ to generate calcium cyanamide. Calcium carbide, when coming across with water or steam, generates acetylene and release a large amount of heating. CaC2 + 2H2O─ → C2H2 + Ca (OH) 2 + 125185.32J, 1kg of pure calcium carbide can produce 366 L of acetylene 366l (15 ℃, 0.1MPa). Thereby, for its storage: calcium carbide should be strictly kept away from water. It is usually packed in a sealed iron container, and sometimes stored in a dry warehouse being filled with nitrogen if necessary. 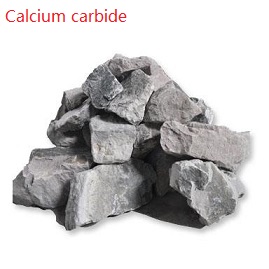 Electric furnace reduction method is the only method for industrial production of calcium carbide at present. Put calcium oxide and coke for reduction reaction at 2000~2200 ℃: CaO + 3C─ → CaC2 + CO-480644.64J, the resulting molten calcium carbide flow into the receiver tank from the bottom of the reactor, and we obtain the final product after cooling. Calcium carbide production belongs to high temperature operation with relative large amount dust being produced and consuming a large amount of electrical energy. In 1980s, the production of per ton of calcium carbide consumes industrial power of about 10~11GJ. In order to reduce the power consumption, people mostly apply large-scale and closed calcium carbide furnace to reduce heat loss and also do good to the recycling of carbon monoxide.

grey or black solid with a garlic-like odour

Calcium carbide (CaC2) has a garlic-like odor and reacts with water to form acetylene gas plus calcium hydroxide and heat. In the past, it was used in miners’ lamps to continuously produce a small acetylene flame to provide some illumination in coal mines.

Calcium carbide is the most relevant carbide industrially because of its important role as the basis of acetylene industry. In locations where there is shortage of petroleum, Calcium Carbide is used as the starting material for the production of acetylene (1 kg of carbide yields ~300 liters acetylene), which, in turn, can be used as a building block for a range of organic chemicals (e.g. vinyl acetate, acetaldehyde and acetic acid). In some locations, acetylene is also used to produce vinyl chloride, the raw material for the production of PVC.
A less important use of Calcium Carbide is related to the ferilizers industry. It reacts with nitrogen to form calcium cyanamide, which is the starting material for the production of cyanamide (CH2N2). Cyanamide is a common agricultural product used to stimulate early foliation.
Calcium Carbide can also be employed as desulfurizing agent for producing low-sulfur carbon steel. Also, it is used as a reducing agent to produce metals from their salts, e.g., for direct reduction of copper sulfide to metallic copper.

Calcium carbide (CaC2) is manufactured by heating a lime and carbon mixture to 2000 to 2100°C (3632 to 3812°F) in an electric arc furnace. At those temperatures, the lime is reduced by carbon to calcium carbide and carbon monoxide (CO), according to the following reaction: CaO + 3C → CaC2 + CO
Lime for the reaction is usually made by calcining limestone in a kiln at the plant site. The sources of carbon for the reaction are petroleum coke, metallurgical coke, and anthracite coal. Because impurities in the furnace charge remain in the calcium carbide product, the lime should contain no more than 0.5 percent each of magnesium oxide, aluminum oxide, and iron oxide, and 0.004 percent phosphorus. Also, the coke charge should be low in ash and sulfur. Analyses indicate that 0.2 to 1.0 percent ash and 5 to 6 percent sulfur are typical in petroleum coke. About 991 kilograms (kg) (2,185 pounds [lb]) of lime, 683 kg (1,506 lb) of coke, and 17 to 20 kg (37 to 44 lb) of electrode paste are required to produce 1 megagram (Mg) (2,205 lb) of calcium carbide.

Reacts rapidly with water to generate the flammable gas acetylene and the base calcium hydroxide. Enough heat may be generated to ignite the gas [Jones, G.W. BM Report Invest. 3755 1944].

Calcium carbide is a reducing agent. May react vigorously with oxidizing materials. The powdered mixture of the acetylide and iron oxide and iron chloride burns violently upon ignition, producing molten iron. Calcium carbide incandesces with chlorine, bromine, or iodine at 245, 350, or 305°C., respectively, [Mellor, 1946, Vol. 5, 862]. The carbide burns incandescently when mixed and heated with lead difluoride, magnesium, hydrogen chloride, and tin (II) chloride, [Mellor, 1946, 1940, 1946, and 1941], respectively. Interaction of Calcium carbide with methanol to give calcium methoxide is vigorous , but subject to an induction period of variable length. Once reaction starts, evolution of acetylene gas is very rapid, unpublished observations [Bretherick 1995]. Mixing Calcium carbide with silver nitrate solutions forms silver acetylide, a highly sensitive explosive. Copper salt solutions would behave similarly, [Photogr. Sci. Eng., 1966, 10, 334]. The mixture of Calcium carbide and sodium peroxide is explosive, as is Calcium carbide and perchloryl fluoride as gases at 100-300°C.

Forms flammable and explosive gas and corrosive solid with moisture.

It is a corrosive solid. Because it is highlywater-reactive, skin contact can cause burn.

Behavior in Fire: If wet by water, highly flammable acetylene gas is formed.