Strontium chloride is the inorganic salt consisting of strontium and chloride. In organic synthesis, it can be used as the resource for the manufacturing of other kinds of strontium compound. Compared with the sulfide, it has the advantage of not reacting with oxygen and carbon dioxide, which facilitates industrial handling. 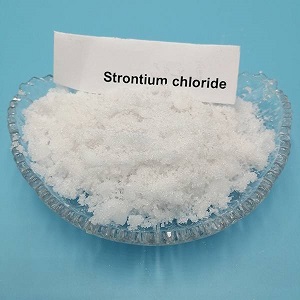 Strontium chloride hexahydrate is used in toothpastes for sensitive teeth.It can also be used to reduce the tooth sensitivity through covering the microscopic tubules in the dentin with nerve endings which has been exposed to gum recession. It can be further used as a red coloring agent in pyrotechnics. Recent study has also shown that a novel topical formulation containing strontium chloride can effectively reduce the intensity and duration of cowhage-induced itch. In biological research, it has been successfully used to induce activation of mouse oocytes in nuclear transfer and other experiments, which is important in understanding the mechanisms of fertilization and early embryonic development.
Strontium chloride is not classified as a dangerous material in transport regulations.

Strontium chloride has the formula SrCl2 and the molecular weight of 247.43 g/cm3. It is a typical salt, forming neutral aqueous solutions.
Strontium chloride can be prepared by treating strontium hydroxide or strontium carbonate with hydrochloric acid:
Sr(OH)2＋ 2HCl→SrCl2＋ 2H2O
SrCO3＋ 2HCl→SrCl2＋ CO2＋H2O
Crystallization from a cold aqueous solution gives the hexahydrate, SrCl2·6H2O. Dehydration of this salt occurs in stages, commencing above 61°C and ending at 320°C, where full dehydration occurs. The dihydrate, SrCl2·2H2O, is a metastable form before the anhydrate begins to form at 200°C. The hydrates formed in solution have one, two or six waters of crystallization.
SrCl2·6H2O is a hexagonal system consisting of colorless long-needle crystals. It loses four crystal waters of hydration at 61.4°C to form plate crystals of SrCl2·2H2O which become the monohydrate at 100°C and anhydrate at 200°C.
Another common hydrate, SrCl2·2H2O, is composed of white, crystalline needles which have a sharp, bitter taste. It can be prepared by fusing SrCO3 with CaCl2 at high temperature and then extracting the melt with water. The solution is then concentrated and then crystallized to form SrCl2·6H2O, which is then dehydrated at 68°C to form the dihydrate.Anhydrous strontium chloride is a colorless crystal or a white powder with a molecular weight of 158.53 g/mol and a density of 3.05 g/cm3. Its melting point is 875°C and its boiling point is 1250°C. It is easily soluble in water but slightly soluble in anhydrous alcohol and acetone. It is not soluble in liquid ammonia.

Strontium chloride is the precursor to other compounds of strontium, such as yellow SrCrO4, which is used as a corrosion inhibitor for aluminum. Strontium chloride is the compound usually used as a red coloring agent in fireworks. It imparts a much more intense red color to the flames than other alternatives. It is employed in small quantities in glass making and metallurgy. The radioactive isotope, strontium-89, used for the treatment of bone cancer. It is usually administered in the form of strontium chloride. Seawater aquaria require small amounts of strontium chloride, which is consumed in the production of the exoskeletons of certain planktons.
SrCl2 is useful in reducing tooth sensitivity by forming a barrier over microscopic tubules in the dentin-containing nerve endings that have become exposed by gum recession.

strontium chloride: A white compound, SrCl2. The anhydrous salt (cubic; r.d. 3.05; m.p. 872°C; b.p. 1250°C) can be prepared by passing chlorine over heated strontium. It is deliquescent and readily forms the hexahydrate, SrCl2·6H2O (r.d. 2.67).This can be made by neutralizing hydrochloric acid with strontium carbonate, oxide, or hydroxide. Strontium chloride is used for military flares.