Sodium tripolyphosphate is a kind of excellent detergent additives, the largest amount of detergent in the production process is set, its role has four aspects:
1. the effect of heavy metal ion chelate: heavy metal ions in the process of washing water, can combine detergent molecules to form insoluble metal salt,reduce the washing ability, even complete loss of function. Therefore, it is necessary to add chelating agent, which can make water containing heavy metal ions into harmless substancesin the detergent. Sodium tripolyphosphate has strong chelation for heavy metal ions, sealing them and eliminating the adverse effects on the washing. In addition, it can capture dirt contained various metals in washing process, playing the role of dissociation of dirt, used as soap synergist and preventing bar soap grease precipitation and bloom.
2. The dirt on his gum, emulsifying and dispersing effect: Dirt often contain body fluids (mainly protein and fat like substances), also contains the sand from the outside world, dust etc.. Sodium tripolyphosphate has the expansion, solubilization on dirt protein, and the effect of the glue solution; emulsification of fat promotes; has dispersing effect on solid dirt, strong emulsification of lubricating oil and fat, can be used to adjust the pH value of buffer liquid soap.
3. prevent caking of detergent: Synthetic detergent powder is hygroscopic, such as stored in high humidity areas, it is necessary to caking phenomenon. Using detergent agglomerates is inconvenient. While the water absorption of sodium tripolyphosphate formed the hexahydrate, with characteristics of dry. When there is extensive use of detergent formulations, it can serve to prevent caking phenomenon caused by moisture absorption, keeping dry granular of the synthetic detergent.
4. It has a larger buffer alkaline washing solution, pH value is maintained at about 9.4, which is conducive to the removal of acidic dirt. 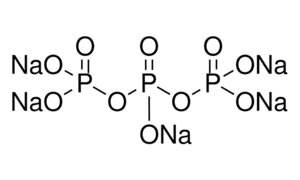 Sodium tripolyphosphate (STPP) is a white powder, soluble in water, its water solution is alkaline. It is a crystalline inorganic salt that can exist in two anhydrous crystalline forms (phase I and phase II) or a hydrous form (Na5P3O10 . 6H2O). STPP is used in a large variety of household cleaning products, mainly as a builder, but also in human foodstuffs, animal feeds, industrial cleaning processes and ceramics manufacture.

1. recrystallization
The industrial sodium tripolyphosphate dissolved in 60~70℃, water solution prepared from 17% to 22%, and filtered to remove the insoluble impurities; and then concentrated by vacuum, cooling crystallization, separation, drying to obtain the product.
Hot phosphoric acid in two steps
In neutralization tank with the consumption of soda ash and food grade phosphoric acid with 50%~60% solution, neutralizing liquid into the intermediate storage tank, pump sent to the spray drying tower for spray drying; powder sent to rotary polymerization furnace, heating to 540~580 ℃ and dehydration polymerization, in air cooling collapse into powder. In aqueous solution of anhydrous ethanol, precipitates six water.
5Na2CO3 +6H3PO4→4Na2HPO4 +2NaH2PO4 +5CO2+5H2O
4Na2HPO4 +2NaH2PO4→2Na5P3O10 +4H2O
2. Two-step thermal process of phosphoric acid will place(55%~60%) phosphate solution via measuring the neutralization tank, heating and the agitator is started under stirring slowly, adding soda ash for neutralization reaction, neutralization tank to maintain 2 molecular hydrogen phosphate disodium on 1 molecular sodium dihydrogen phosphate ratio. The mixed liquid and the high groove into the spray, drying tower, drying and after drying of orthophosphate dry from the tower bottom discharge sent to rotary polymerization furnace, carried away by a gas stove a few dry by the cyclone dust collector to be recycled.
Dry phosphate Is in the furnace and at temperature of 350 to 450℃ polymerization reaction generated sodium tripolyphosphate, after cooling, crushing of refined sodium tripolyphosphate.
5Na2CO3 +6H3PO4→4Na2HPO4 +2NaH2PO4 +5CO2+5H2O
4Na2HPO4 +2NaH2PO4→2Na5P3O10 +4H2O
Wet process phosphoric acid one step will rock phosphate and sulfate reaction of phosphoric acid and soda ash used in removing fluoride can remove the fluosilicic acid, in the desulfurization tank with barium carbonate to remove sulfate, in order to reduce the sodium sulfate content in phosphoric acid.
Then using sodium carbonate for neutralization. After filtration to a large number of iron, aluminum and other impurities. The fine tuning, filtering, income of containing a certain proportion of hydrogen phosphate, sodium and sodium dihydrogen phosphate solution in the evaporator concentrate to comply with requirements of the polymeric material spraying. The slurry sprayed into the rotary polymerization furnace, by hot air spray drying and aggregation. After cooling, crushing, sieving of sodium tripolyphosphate product.
Ca5F(PO4)3+5H2SO4+10H2O→3H3PO4+5CaSO4.2H2O+HF
6H3PO4+5Na2CO3→4Na2HPO4+2NaH2PO4+5H2O+5CO2↑
4Na2HPO4+2NaH2PO4→2Na5P3O10+4H2O
3. Hydrogen phosphate disodium salt and sodium dihydrogen phosphate are mixed and heated to 110℃dehydration and continue heating to 540~580℃, dehydration and stable particle type; as heating to 620 ℃, melting cooling to 550 ℃, then cooled in the air, is disintegrated into the powder type. Ethanol in water solution to get six water.
4. Sodium dihydrogen phosphate method will put dihydrogen phosphate adding polymerizer, heating to 700 ℃, dehydrated 15~30min. Then quenched in cold water and processing.
Phosphoric anhydride method
After yellow phosphorus is fused heating tank, enters the combustion furnace, oxided of phosphorus and precipitation. Cools, remove phosphoric anhydride (P2O5). Phosphoric anhydride and sodium carbonate according to 1: 0.8 (mol) cool in a blender mixing into graphite crucible. In 750 to 800 ℃ for indirect heating, dehydration after polymerization to get six partial sodium phosphate melt. Put it into the intraday quench cooling, and get the glass and transparent sodium hexametaphosphate.

Sodium tripolyphosphate is a binder, stabilizer, and sequestrant that is mildly alkaline, with a pH of 10, and moderately soluble in water, with a solubility of 15g in 100ml of water at 25°C. It is used to improve the whipping properties of egg-containing angel food cake mix and meringues. It reduces gelling of juices and canned ham and tenderizes canned peas and lima beans. It is a moisture binder in cured pork and protects against discoloration and reduces shrinkage in sausage products. In algin desserts, it functions as a calcium sequestrant. Sodium tripolyphosphate is also termed pentasodium tripolyphosphate and sodium triphosphate. 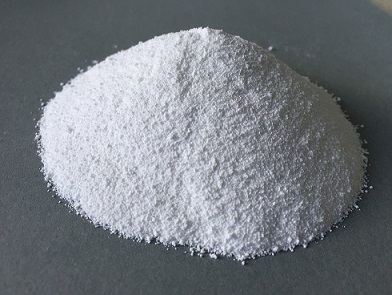 Purify it by repeated precipitation from aqueous solution by slow addition of MeOH and dried in air. Also a solution of anhydrous sodium tripolyphosphate (840g) in water (3.8L) is filtered, MeOH (1.4L) is added with vigorous stirring to precipitate Na5P3O10.6H2O. The precipitate is collected on a filter, air dried by suction, then left to dry in air overnight. It is crystallised twice more in this way, using a 13% aqueous solution (w/w), and leaching the crystals with 200mL portions of water [Watters et al. J Am Chem Soc 78 4855 1956]. Similarly, EtOH can be added to precipitate the salt from a filtered 12-15% aqueous solution, the final solution containing ca 25% EtOH (v/v). Air drying should be at a relative humidity of 40-60%. Heat and vacuum drying should be avoided. [Quimby J Phys Chem 58 603 1954, Klement in Handbook of Preparative Inorganic Chemistry (Ed. Brauer) Academic Press Vol I p 547 1963.]