Mercury is the only metal that is a liquid metal at room temperature. Occurring naturally as mercuric sulfide (in cinnabar ore) because of its low boiling point can be isolated readily from the ore and condensing the resulting vapor to form a metal that is 99.9% pure. Solid mercury is ductile and very malleable and is soft enough to cut with a knife. A poor conductor of heat, mercury can conduct electricity but behaves much like a noble gas. It does not react with most acids but can react with very strong acids and dissolves readily to form amalgams with many metals, including gold, zinc, and aluminum. 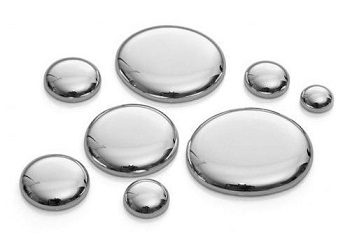 Although mercury is known from early times and was used by alchemists, its first modern scientific applications date back to 1643 when Torricelli used it in the barometer to measure pressure and about eight decades later Fahrenheit used it in the thermometer to measure temperature. Before this, mercury’s use was confined to decorative work, gold extraction and medicines. The element was named after the planet mercury and its symbol Hg is taken from the Latin word hydrargyrum, which means liquid silver.
The element does not occur in nature in native form. Its principal mineral is cinnabar, the red mercuric sulfide, HgS. Black mercuric sulfide, metacinnabar, also is found in nature. Other ores are livingstonite, HgSb4S7; coloradite, HgTe; tiemannite, HgSe; and calomel, HgCl. Its concentration in the earth’s crust is estimated to be 0.08 mg/kg. The average concentration in sea water is about 0.03 µg/L.

Some of the most important uses of mercury are in the electrical and electrolytic applications. A broad range of such applications include mercury batteries and cells in portable radios, microphones, cameras, hearing aids, watches, smoke alarms, and wiring and switching devices. Other notable applications are in mercury vapor lamps, fluorescent tubes and electrical discharge tubes. Mercury electrodes are widely used in electrolytic cells. Mercury cathodes are employed in the electrolysis of sodium chloride to produce caustic soda and chlorine. Another major use, as mentioned earlier, is in thermometers, manometers, barometers and other pressure-sensing devices. Mercury also is used as a catalyst in making urethane foams and vinyl chloride monomers. Mercury and its compounds long have been used as fungicides in paints and in agriculture. Mercury compounds are used in medicines, pigments and analytical reagents.
In mercury arc lamps producing ultraviolet rays; in mercury boilers; manufacture of all mercury salts, mirrors; as catalyst in oxidation of organic Compounds; extracting gold and silver from ores; making amalgams, electric rectifiers, mercury fulminate; also in dentistry; in determining N by Kjeldahl method, for Millon's reagent; as cathode in electrolysis, electroanalysis, and many other uses. Also in pharmaceuticals, agricultural chemicals, anti-fouling paints.

Mercury mostly is obtained from its sulfide ore, cinnabar. The process involves roasting cinnabar in a furnace between 600 to 700°C. Mercury vapors are cooled and condensed into metal:
HgS + O2 → Hg + SO2
Mercury may also be extracted from cinnabar by reduction of the ore with lime at elevated temperature:
4HgS + 4CaO → 4Hg + 3CaS + CaSO4
Smaller quantities of metal are recovered from mercury-containing industrial and municipal wastes, such as amalgams and batteries. The scrap material is heated in a retort and the vapors of mercury are condensed into highpurity metal.

Elemental mercury and all its compounds are highly toxic by all routes of exposure. The element has significant vapor pressure at ambient temperatures (0.0018 torr at 25°C) that can produce severe inhalation hazard. The symptoms from short exposure to high concentration of mercury vapors are bronchitis, coughing, chest pain, respiratory distress, salivation and diarrhea (Patnaik, P. 1999. A Comprehensive Guide to the Hazardous Properties of Chemical Substances, 2nd ed., New York: John Wiley and Sons). Other symptoms are tremor, insomnia and depression. Mercury can cause damage to kidney, liver, lungs and brain. Organomercury compounds and inorganic salt solutions can be absorbed into the body through skin contact and cause severe poisoning. It accumulates as Hg2+ in the brain and kidneys. US EPA has classified mercury as one of the priority pollutant metals in environmental matrices.

The name of Hg derives from the Roman god “Mercury”, the nimble messenger of the gods, since the ancients used that name for the element, which was known from prehistoric times. The name mercury originated in 6th-century alchemy, in which the symbol of the planet was used to represent the metal; the chemical symbol Hg derives from the Latin hydrargyrum, “liquid silver or quick silver.” Although its toxicity was recognized at an early date, its main application was for medical purposes.

Cadmium is used in electroplating, in nickelcadmiumstorage batteries, as a coating forother metals, in bearing and low-meltingalloys, and as control rods in nuclear reactors.Cadmium compounds have numerousapplications, including dyeing and printingtextiles, as TV phosphors, as pigments andenamels, and in semiconductors and solarcells.
Vegetables and cereals are the main sourcesof dietary Cd while meat and fish contain themetal to a lesser extent.

Mercury is mined primarily in underground mines as the metal or as the red sulfide cinnabar (HgS). Like HgO, the sulfide decomposes at higher temperatures. Heating of the ore and condensation of the mercury vapor constitute a convenient procedure for reducing, extracting, and purifying mercury from its ore. In the United States, mercury is produced primarily from secondary sources; this involves recycling a variety of industrial waste products. A survey in 1980 conducted by the U.S. National Institute for Occupational Safety and Health suggested that about 70,000 workers were exposed to mercury and its compounds; the majority of these exposures involves mercury vapor. However, this number has probably already decreased considerably, and occupational mercury vapor exposure has now become fairly rare in industrialized countries. On the other hand, numbers of workers exposed to mercury vapor from informal mining in developing countries has increased disproportionally and is causing health risks to workers and their families, including children.

An odorless, silvery metallic liquid. Insoluble in water. Toxic by ingestion, absorption and inhalation of the fumes. Corrosive to aluminum. Used as a catalyst in instruments, boilers, mirror coatings.

MERCURY forms an explosive acelylide when mixed with acetylene. Can form explosive compounds with ammonia (a residue resulting from such a reaction exploded when an attempt was made to clean MERCURY off a steel rod [Chem. Eng. News 25:2138. 1947]. Chlorine dioxide (also other oxidants, such as: chlorine, bromine, nitric acid, performic acid), and MERCURY explode when mixed [Mellor 2, Supp. 1:381. 1956]. Methyl azide in the presence of MERCURY is potentially explosive [Can. J. Chem. 41:1048. 1963]. Ground mixtures of sodium carbide and MERCURY can react vigorously [Mellor 5:848. 1946-47]. Ammonia forms explosive compounds with gold, MERCURY, or silver. (Eggeman, Tim. mmonia Kirk-Othmer Encyclopedia of Chemical Technology. John Wiley & Sons, Inc. 2001.).

Mercury is a non-specific toxin, attacking many of the body s systems. At low levels of exposure, symptoms are mainly related to nerve and brain function and include memory loss, mood instability, tremor, and other stress-like symptoms: poor coordination, headache, and visual and hearing problems. Recently, reproductive health has been shown to be affected, with abnormalities in menstrual cycle, poor outcome of pregnancy, and subfertility in both men and women. The immune system is also damaged by mercury exposure.

Behavior in Fire: Not flammable

Mercury is not combustible.

Mercury is used as a catalyst, in dental applications; and in pharmaceuticals; as a liquid cathode in cells for the electrolytic production of caustic and chlorine. It is used in electrical apparatus (lamps, rectifiers, and batteries) and in control instruments (switches, thermometers, and barometers)

Mercury cycles through various environmental phases by exchange from ground to air and back again. Metallic and dimethylmercury, which are volatile, will be released as mercury vapor that can travel long distances before being redeposited. When found in surface waters and soils it will degas into the surrounding air where natural currents and winds spread the materials until they are deposited back on the surface waters and soils. The majority of mercury returned to the soil or water is by wet partition and accounts for almost all of the mercury found in lakes with no other input source. Inert mercury will deposit bound to particulates in aerosols. Once deposited, mercury must adsorb to soil or sediment particulates or be returned to the atmosphere. This cycle continues with a portion of the mercury revolatilizing into the atmosphere in each cycle.

Precautions should be taken to prevent spills of mercury because drops of the liquid metal can easily become lodged in floor cracks, behind cabinets, and equipment, etc., with the result that the mercury vapor concentration in the laboratory may then exceed the safe and allowable limits. Containers of mercury should be kept tightly sealed and stored in secondary containers (such as a plastic pan or tray) in a well-ventilated area. When breakage of instruments or apparatus containing significant quantities of Hg is possible, the equipment should be placed in a plastic tray or pan that is large enough to contain the mercury in the event of an accident. Transfers of mercury between containers should be carried out in a fume hood over a tray or pan to confine any spills.

After air has been bubbled through mercury for several hours to oxidise metallic impurities, it is filtered to remove coarser particles of oxide and dirt, then sprayed through a 4-ft column containing 10% HNO3. It is washed with distilled water, dried with filter paper and distilled under vacuum. [Schenk in Handbook of Preparative Inorganic Chemistry (Ed. Brauer) Academic Press Vol I p8 1963.]

Consult with environmental regulatory agencies for guidance on acceptable disposal practices. Generators of waste containing this contaminant (≥100 kg/mo) must conform to EPA regulations governing storage, transportation, treatment, and waste disposal. Accumulate for purification and re-use if possible. Mercury vapors may be adsorbed or treated with sulfide solutions and then sent to mercury recovery operations