The hexagonally closest packed α-Al2O3 modification is the only stable oxide in the Al2O3 –H2O system. Corundum is a common mineral in igneous and metamorphic rocks. Red and blue varieties of gem quality are called ruby and sapphire, respectively. The lattice of corundum is composed of hexagonally closest packed oxygen ions forming layers parallel to the (0001) plane. Only two-thirds of the octahedral interstices are occupied by aluminum ions. The structure may be described roughly as consisting of alternating layers of Al and O ions. The corundum structurewas determined in the early 1920s .

Regular aluminum oxide is white and has a chemical composition of approximately 95 % Al2O3, 1.5 % SiO2, less than 0.5 % Fe2O3, and 3 % TiO2. Because of very slow cooling in the Higgins furnace, the crystals of alumina are coarse, averaging 10 – 15mm in diameter. 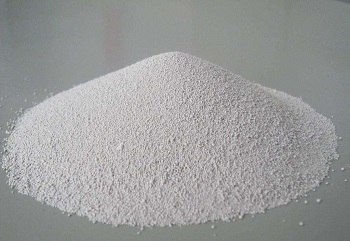 When aluminum hydroxides or oxide hydroxides are heated in air at atmospheric pressure, they undergo a series of compositional and structural changes before ultimately being converted to α-Al2O3. These thermal transformations are topotactic. Despite a loss of 34 or 15 % of mass for the trihydroxides or oxide hydroxides, respectively, the habit of the primary crystals and crystal aggregates changes very little. This leads to considerable internal porosity, which may increase the specific surface area of the material to several hundred m2/g. Structural forms develop that, although not thermodynamically stable, are well reproducible and characteristic for a given temperature range and starting material. These transition aluminas have been the subject of numerous investigations because of their surface activity, sorptive capacity, and usefulness in heterogeneous catalysis.

Monocrystalline aluminum oxide is a very high purity abrasive, produced directly from bauxite in a single-stage fusion . The preferred method employs a furnace feed consisting of bauxite, pyrite (FeS2) or sulfur, carbon, and iron borings. When subjected to fusion in the Higgins batch furnace, two immiscible liquids are formed as with regular aluminum oxide. However, in the present case very slowcooling of the upper liquid results in essentially pure, individual crystals of Al2O3 in a matrix of sulfides. After the pig has cooled and been crushed, the matrix is removed chemically and mechanically. This treatment releases alumina crystals in the range of sizes required by the industry.

Aluminum(III) oxide is also called aluminum oxide. In mineral form it is called corundum and is referred to as alumina in conjunction with mining and aluminum industries. Alumina exists in hydrated forms as alumina monohydrate, Al2O3?H2O and alumina trihydrate Al2O3?3H2O. The geologic source of aluminum is the rock bauxite, which has a high percentage of hydrated aluminum oxide. The main minerals in bauxite are gibbsite (Al(OH)3), diaspore (AlO(OH)), and boehmite (AlO(OH).

Vary according to the method of prepa- ration. White powder, balls, or lumps of various mesh.Insoluble in water, dif- ficultly soluble in mineral acids and strong alkali. Noncombustible.

Occurs in nature in abundance; the principal forms are bauxites and laterites. The mineral corundum is used to produce precious gems, such as ruby and sapphire. Activated aluminas are used extensively as adsorbents because of their affinity for water and other polar molecules; and as catalysts because of their large surface area and appropriate pore sturcture. As adsorbents, they are used for drying gases and liquids; and in adsorption chromatography. Catalytic properties may be attributed to the presence of surface active sites (primarily OH- , O2- , and Al3+ ions). Such catalytic applications include sulfur recovery from H2S (Clauss catalysis); dehydration of alcohols, isomerization of olefins; and as a catalyst support in petroleum refining.

Aluminum Oxide (Alumina) is the most widely used oxide, chiefly because it is plentiful, relatively low in cost, and equal to or better than most oxides in mechanical properties. Density can be varied over a wide range, as can purity — down to about 90% alumina — to meet specific application requirements. Alumina ceramics are the hardest, strongest, and stiffest of the oxides. They are also outstanding in electrical resistivity, dielectric strength, are resistant to a wide variety of chemicals, and are unaffected by air, water vapor, and sulfurous atmospheres. However, with a melting point of only 2039°C, they are relatively low in refractoriness, and at 1371°C retain only about 10% of room-temperature strength. In addition to its wide use as electrical insulators and its chemical and aerospace applications, the high hardness and close dimensional tolerance capability of alumina make this ceramic suitable for such abrasion-resistant parts as textile guides, pump plungers, chute linings, discharge orifices, dies, and bearings.

Alumina is a white crystalline substance that resembles salt. Approximately 90% of all alumina is used for making aluminum, with the remainder used for abrasives and ceramics.

Aluminum oxide is known as the mineral bauxite. Its main use is for the production of aluminum metal by electrolysis. It is also used in many other chemical reactions.

Occurs in nature in abundance; the principal forms are bauxites and laterites. The mineral corundum is used to produce precious gems, such as ruby and sapphire. Activated aluminas are used extensively as adsorbents because of their affinity for water and other polar molecules; and as catalysts because of their large surface area and appropriate pore sturcture. As adsorbents, they are used for drying gases and liquids; and in adsorption chromatography. Catalytic properties may be attributed to the presence of surface active sites (primarily OH– , O2– , and Al3+ ions). Such catalytic applications include sulfur recovery from H2S (Clauss catalysis); dehydration of alcohols, isomerization of olefins; and as a catalyst support in petroleum refining. Pure Aluminum oxide, needed to produce aluminum by the Hall process, is made by the Bayer process. The starting material is bauxite (Al2O3 • nH2O). The ore contains impurities, such as, SiO2, Fe2O3, TiO2, and Na2O. Most impurities are removed following treatment with caustic soda solution. Bauxite is dissolved in NaOH solution. Silica, iron oxides and other impurities are filtered out of the solution. CO2 is then bubbled through this solution. This precipitates are heated to remove water and produce Al2O3. These impurities are removed. Calcinations of bauxite produce Aluminum oxide of abrasive and refractory grades. Activated Aluminum oxide of amorphous type, as well as the transition Aluminum oxides of γ, η, χ, and ρ forms, are obtained from various aluminum hydroxides, such as, α- and β-trihydrates, α-monohydrate and Aluminum oxide gel. Such chemicals are also obtained from bauxite by the Bayer process.

The Bayer process begins by grinding the bauxite and mixing it with sodium hydroxide in a digester. The sodium hydroxide dissolves aluminum oxide components to produce aluminum hydroxide compounds. For gibbsite, the reaction is: Al(OH)3 + NaOH → Al(OH)4- + Na+. Insoluble impurities such as silicates, titanium oxides, and iron oxides are removed from the solution while sodium hydroxide is recovered and recycled. Reaction conditions are then modified so that aluminum trihydroxide (Al(OH)3) precipitates out. The reaction can be represented as the reverse of the previous reaction: Al(OH)4- + Na+ → Al(OH)3 + NaOH. Aluminum trihydroxide is calcined to drive off water to produce alumina:
Al(OH)3 Al2O3 + 3H2O.

The mineral corundum is natural aluminum oxide, and emery, ruby, and sapphire are impure crystalline varieties. The mixed mineral bauxite is a hydrated aluminum oxide.

Most of the aluminum oxide produced commercially is obtained by the calcination of aluminum hydroxide.

White odorless crystalline powder. Water insoluble. Properties (both physical and chemical) vary according to the method of preparation; different methods give different crystalline modifications. The variety formed at very high temperature is quite inert chemically.

Aluminum oxide is chemically amphoteric (behaves as a weak acid in the presence of base and as a weak base in the presence of acid). May act catalytically. May cause the exothermic polymerization of ethylene oxide. May cause the vigorous polymerization of vinyl chloride [MCA SD-75, 1970]. The degree of subdivision of the Aluminum oxide may affect the vigor of such reactions.

The aluminas are considered to be nuisance dusts; their role in fibrogenic lung disease remains unclear.
Assessment of the toxicity of aluminas has been complicated by the chemical and physical variants of the compounds and inconsistencies in the nomenclature used to describe them.1 The group of compounds referred to as aluminas is composed of various structural forms of aluminum oxide, trihydroxide, and oxyhydroxide. 2 As these aluminas are heated, dehydration occurs, producing a variety of transitional forms; temperatures between 200 and 500°C result in low-temperature-range transitional aluminas characterized by increased catalytic activity and larger surface area.(Transitional aluminas include c, h, and g forms, which, taken together, were formerly termed “g.”)

Fused aluminum oxide was the second synthetic abrasive to be developed. Synthetic aluminum oxide (alumina) is made as a white powder and can be somewhat harder than corundum (natural alumina) because of its purity. However, corundum has a Mohs hardness of approximately 9 (on a scale of 1 to 10. Alumina can be processed with different properties by slight alteration of the reactants in the manufacturing process. Several grain sizes of alumina are available, and alumina has largely replaced emery for several abrasive uses. Aluminum oxide is widely used to make bonded abrasives, coated abrasives, and air-propelled grit abrasives for dental applications.
Sintered aluminum oxide is used to make white stones, which are popular for adjusting dental enamel and finishing metal alloys, resin-based composites, and ceramic materials.
Pink and ruby variations of aluminum oxide abrasives are made by adding chromium compounds to the original melt. These variations are sold in a vitreous-bonded form as noncontaminating mounted stones for the preparation of metal– ceramic alloys to receive porcelain. Remnants of these abrasives and other debris should be removed from the surface of metals used for metal–ceramic bonding so as not to prevent optimal bonding of porcelain to the metal alloy. A review by Yamamoto (see Selected Reading) suggests that carbide burs are the most effective instruments for finishing this type of alloy because they do not contaminate the metal surface with entrapped abrasive particles.

Aluminum oxide is generally regarded as relatively nontoxic and nonirritant when used as an excipient. Inhalation of finely divided particles may cause lung damage (Shaver’s disease).

Most hazardous exposures to aluminum occur in smelting and refining processes. Aluminum is mostly produced by electrolysis of Al2O3 dissolved in molten cryolite (Na3AlF6). Aluminum is alloyed with copper, zinc, silicon, magnesium, manganese, and nickel; special additives may include chromium, lead, bismuth, titanium, zirconium, and vanadium. Aluminum and its alloys can be extruded or processed in rolling mills, wire works, forges, or foundries; and are used in the shipbuilding, electrical, building, aircraft, automobile, light engineering, and jewelry industries. Aluminum foil is widely used in packaging. Powdered aluminum is used in the paints and pyrotechnic industries. Alumina, emery, and corundum has been used for abrasives, refractories, and catalysts; and in the past in the first firing of china and pottery.

Aluminum oxide should be stored in a well-closed container in a cool, dry, place. It is very hygroscopic.

Consult with environmental regulatory agencies for guidance on acceptable disposalpractices. Generators of waste containing this contaminant (≥100 kg/mo) must conform with EPA regulations governing storage, transportation, treatment, and waste disposal of Aluminum Oxide-Disposal in a sanitary landfill. Mixing of industrial process wastes and municipal wastes at such sites is not encouraged however. Aluminum powder may be recovered and sold as scrap. Recycling and recovery is a viable option to disposal for aluminum metal and aluminum fluoride (A-57).

Included in the FDA Inactive Ingredients Database (oral tablets and topical sponge). Included in nonparenteral medicines licensed in the UK.