Lithium chloride is a White cubic crystals; granules or powder; hygroscopic; sharp salt-like taste; melts at 605°C; vaporizes around 1360°C, It has an unusually high water solubility when compared to the other alkali metal chlorides; readily dissolves in water (64g/100mL at 0°C); also highly soluble in alcohol and pyridine; moderately soluble in acetone (4.1 g/100mL at 25°C).
The following hydrates are known: LiCl·H2O, LiCl-3H20 and LiCl- 5H2O. The higher hydrates are stable at progressively lower temperatures. Lithium chloride is deliquescent under normal atmospheric conditions.
Lithium chloride is soluble to a significant extent in many polar organic liquids. It is generally most soluble in alcohols in which the solubility decreases as the size of the organic radical increases. 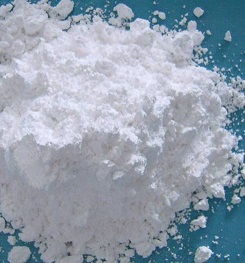 It dehumidifies air for industrial drying and for air conditioning. Lithium chloride bums with a chrims on flame and is used in pyrotechnics. It is also used as a pyrotechnic in welding and brazing fluxes.

Lithium chloride is used as an antidepressant, especially in the treatment of manic depression and bipolar disorders.

Lithium chloride solutions are used in large dehumidification systems in the air-conditioning industry. This use depends on the low equilibrium pressure of water vapor above solutions of lithium chloride. After the solutions have absorbed water, they are regenerated by heating.
Lithium chloride is used in a number of salt mixtures. Such salt mixtures have low melting points allowing the material to be used in brazing fluxes and brazing baths. The molten lithium chloride-potassium chloride eutectic mixture can be used as an electrolyte. The mixture is electrolyzed for the production of lithium metal and is used as an electrolyte in voltaic cells.
manufacture of mineral waters; in pyrotechnics; soldering aluminum; in refrigerating machines.

ChEBI: A metal chloride salt with a Li(+) counterion.

Lithium chloride may be prepared by reaction of lithium carbonate or lithium hydroxide with hydrochloric acid followed by crystallization:
(1) Li2CO3+ 2HCl →2LiCl + CO2+ H2O
(2) LiOH + HCl →LiCl + H2O
Crystallization above 95°C yields anhydrous salt. Hot solution upon cooling forms crystals of monohydrate, LiCl.H2O.
The solid and solution are separated and the supernatant solution is recycled for further evaporation. The crystals are dried to yield anhydrous lithium chloride.
Lithium chloride can be synthesized from its elements by heating lithium metal with chlorine gas.
It also may be obtained from natural brine.

These materials have weak oxidizing or reducing powers. Redox reactions can however still occur. For example, CO2, which is often regarded as chemically inert, vigorously oxidizes the strong reducing agent Mg if the two are heated together. The majority of compounds in this class are slightly soluble or insoluble in water. If soluble in water, then the solutions are usually neither strongly acidic nor strongly basic. These compounds are not water-reactive. Some do react with acids: carbonates generate carbon dioxide and heat when treated with acids; fluorides, sulfites and sulfides generate toxic gases (hydrogen fluoride, sulfur dioxide and hydrogen sulfide, respectively) when treated with acids.

Human poison by ingestion. Experimental poison by intravenous and intracerebral routes. Moderately toxic by subcutaneous and intraperitoneal routes. Experimental teratogenic and reproductive effects. Human systemic effects by ingestion: somnolence, tremors, nausea or vomiting. An eye and severe skin irritant. Human mutation data reported. Questionable carcinogen with experimental neoplastigenic data. This material has been recommended and used as a substitute for sodwm chloride in "saltfree" diets, but cases have been reported in which the ingestion of lithium chloride has produced dminess, ringing in the ears, visual disturbances, tremors, and mental confusion. In most cases, the symptoms disappeared when use was discontinued. Prolonged absorption may cause disturbed electrolyte balance, impaired renal function. Reaction is violent with BrF3. When heated to decomposition it emits toxic fumes of Cl-. Used for dehumidification in the air conditioning industry. Also used to obtain lithum metal. See also LITHIUM COMPOUNDS.

Crystallise it from water (1mL/g) or MeOH and dry it for several hours at 130o. Other metal ions can be removed by preliminary crystallisation from hot aqueous 0.01M disodium EDTA. It has also been crystallised from conc HCl, fused in an atmosphere of dry HCl gas, cooled under dry N2 and pulverised in a dry-box. Kolthoff and Bruckenstein [J Am Chem Soc 74 2529 1952] precipitated it with ammonium carbonate, washed it with Li2CO3 five times by decantation and finally with suction, then dissolved it in HCl. The LiCl solution is evaporated slowly with continuous stirring in a large evaporating dish, the dry powder being stored (while still hot) in a desiccator over CaCl2.