Magnesium hydroxide is best known as the active ingredient in Milk of Magnesia, an antacid and laxative which has been used for 150 years. It forms a suspension in water, and its reaction with acid only dissolves it gradually, giving it long-lasting effects. At higher doses, rather than acid neutralization, its primary action is to hold water, as it is not absorbed by the large intestine, relieving constipation.
It is also used as a fire retardant and smoke repressor in various applications due to an endothermic decomposition reaction which takes place at 332°C, releasing magnesia and water. Further applications include wastewater treatment, as a fuel additive, and production of magnesium salts.

Magnesium hydroxide is a white to off-white crystalline powder with a specific gravity of 2.4 and a Mohs hardness of around 3.0. It loses 30.9% of its mass as water vapor on heating above 450°C. It being soluble in dilute acid and ammonium salt solution, but almost insoluble in water and alcohol. The solubility in water (18 ° C) was 0.0009g/100g. 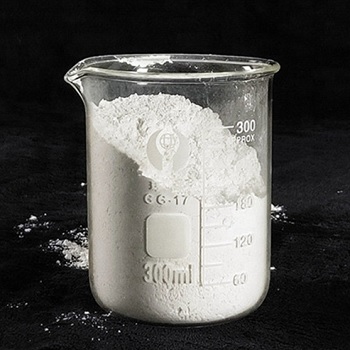 Magnesium hydroxide is used as highly effective non-toxic inorganic flame retardant, filler, and smoke suppressant additive for production of plastics and filled (co)polymer compounds based on elastomers, thermosets, thermoplastics, including those based on polyvinylchloride, polyamides, polystyrene, polyethylene, polypropylene, polyethylene terephthalate, ultrathene, and so on, in paper and cardboard industry, as a mild neutralizing agent for waste and natural water treatment, as raw material in chemical and pharmaceutical industry.

Magnesium hydroxide is an excellent flame retardant for plastics and rubber products. In environmental protection, it is taken as flue gas desulfurization agent and can replace the caustic soda and lime as the neutralizer of acid-containing waste water and the absorbent of the heavy metal. In addition, it can also be used for the electronics industry, medicine, sugar refining, as insulation materials and for the manufacturing of other magnesium salt products.
Magnesium hydroxide is used as a flue gas desulfurization absorbent. In the 20th century, before the 1970s, most flue gas desulfurization applied sodium hydroxide method, limestone gypsum method. However, due to the secondary pollution of the byproducts to the environment, it has been switched to hydrogen magnesium oxide method since the 20th century; as acidic wastewater neutralizer; as the flame retardants of the synthetic resin; it was previously often used of bromine, phosphorus, chlorine and inorganic salt system. In these products, it had been mostly used of the aluminum hydroxide in these products. However, it has now been converted to magnesium hydroxide , mainly due to that in the thermoplastic resin, it can be increased of decomposition temperature to 350 ℃ or more with magnesium hydroxide; it is medically used for the control of gastric acid and laxatives; food additives, as a mineral additive, color protection agent, desiccant, alkali agent and aid of sugar production; used as a chemical reagent for measuring ammonium salt: Mg (OH) 2 + 2NH4Cl → MgCl2 + 2NH4OH.
This product has a variety of advantage including being smoke-free, non-toxic, non-corrosive, cheap and easy to get advantages. Moreover, the temperature of its decomposition for release of water is higher than aluminum hydroxide, being more suitable for the requirement of high-temperature processing. Magnesium hydroxide can be used as the flame retardants of polyethylene, polypropylene, PVC, EPDM, unsaturated polyester and other plastics and rubber. It can also be used as the flame retardant of paint.

Treatment of gastric acid with magnesium hydroxide, the following Side effects that you should report to your doctor or health care professional as soon as possible:
allergic reactions like skin rash, itching or hives, swelling of the face, lips, or tongue
confusion
feeling faint or lightheaded, falls
loss of appetite
nausea, vomiting
rectal bleeding
unusually weak or tired
Side effects that usually do not require medical attention (report to your doctor or health care professional if they continue or are bothersome):
chalky taste
diarrhea
stomach cramps

Magnesium hydroxide is an excellent flame retardant for plastics and rubber products. In environmental protection, it can be used as flue gas desulfurization agent, being able to replace the caustic soda and lime as acid-containing waste water neutralizer. It can also used as oil additive with anti-corrosion and desulfurization effect. In addition, it can also be used for the electronics industry, medicine, sugar refining, for insulation materials and the manufacture of other magnesium salt products.
One important application of Magnesium Hydroxide is the use of the material in the pharmaceutical industry, for example as antacid to neutralize stomach acids and as laxative.
The largest industrial application of Magnesium Hydroxide is flame retardants for articles such as roofing, isolation materials, plastic articles and coatings. The mechanism of flame retardancy is based on the endothermic decomposition of the material into MgO and H2O. This reaction adsorbs heat, which delays ignition of the associated substance. The water that is released dilutes combustible gases and inhibits oxygen from aiding the combustion.

Brine-lime method:
Send the preliminarily purified and refined brine and digested lime-treated lime milk for precipitation in the sedimentation tank, and the flocculant is added to the obtained slurry, mixed thoroughly, and then enters the sedimentation tank for separation, filtering, washing, drying and pulverizing to obtain the finished product of magnesium hydroxide. Its
MgCl2 + Ca (OH) 2 → CaCl2 + Mg (OH) 2
. Brine-Ammonia water method:
Apply purification process to remove the sulfate, carbon dioxide, boron and other impurities of brine for using as raw material brine. Ammonia is taken as a precipitant in the reactor for precipitation reaction. Add a certain amount of crystal seed before the reaction and stir thoroughly. The ratio of brine to ammonia is 1: (0.9~0.93), and the temperature is controlled at 40 ℃. Add the flocculant after the end of the reaction, and apply filtering, washing, drying and crushing to the precipitate to obtain the finished product of magnesium hydroxide. The reaction equation is:
MgC12 + 2NH3 • H2O → Mg (OH) 2 + 2NH4Cl
The test method needs to be improved of the yield, shortened of the washing cycle and improved of the production process.
Magnesite-hydrochloric acid-ammonia water method: magnesite and anthracite or coke is subject to calcination in the vertical kiln to generate magnesium oxide and carbon dioxide. The magnesite powder is prepared into a magnesium chloride solution by reacting with a prescribed concentration of hydrochloric acid.
Magnesium chloride solution is reacted with a certain concentration of ammonia in the reactor. The resulting product is successively subject to washing, sedimentation, filtration separation, drying, grinding, to obtain the magnesium hydroxide products. If necessary, a surface treatment agent may be added for surface treatment.

A white, bulky powder. It dissolves in dilute acids, but is practically insoluble in water and in alcohol.

Magnesium hydroxide is another metal hydrate that decomposes endothermically, accompanied by the formation of water. It decomposes at 330 °C, which is 100 °C higher than alumina trihydrate, and can therefore be used in polymers that are processed at higher temperatures. Magnesium hydroxide is white, has an average particle size of 1–10 μm, density of 2.36 g/mL, refractive index of 1.58, and Mohs’ hardness of 2.00. Water loss on ignition is 31.8 wt %. Magnesium hydroxide contains 1.0 wt % Ca(OH)2 and is made by Solem Industries and Morton Thiokol.

Magnesium Hydroxide decomposes when heated to 360°C and forms the oxide, MgO. It is very slightly soluble in water at 0.00122 g/100 ml and has a solubility product of 5.61×10-12. Crystals of Mg(OH)2 have a refractive index of 1.559. Its heat of formation is –925 kJ/mol with an entropy of 63 J/mol·K.
As a suspension in water, it is often called milk of magnesia because of its milk-like appearance. The solid mineral form of magnesium hydroxide is known as “brucite”.
It can be prepared by the metathesis reaction between any soluble magnesium salts and an alkali hydroxide such as sodium or even ammonium:
Mg2+(aq)＋2OH-(aq)→Mg(OH)2(solid)
Magnesium hydroxide is a common component of antacids and laxatives. It interferes with the absorption of folic acid and iron. Its low solubility makes it a weak base. Another method of commercial manufacture of magnesium hydroxide involves the chloride obtained from seawater. After the chloride is recrystallized several times to obtain a level of purity, it is calcined at about 1000°C:
MgCl2·6H2O → MgCl2＋6H2O
→ Mg(OH)-xCl2-x＋xHCl
→ MgO＋(2－x)HCl

Magnesium Hydroxide occurs naturally as the mineral brucite. Brucite, usually found as a low temperature, hydrothermal vein mineral associated with calcite, aragonite, talc, or magnesite, appears as a decomposition product of magnesium silicates associated with serpentine, dolomite, magnesite, and chromite. Brucite also occurs as a hydrated form of periclase, and is found in serpentine, marble, chlorite schists, and in crystalline limestone.

Magnesium Hydroxide is an alkali that is a general purpose food additive. it exists as a white powder and has poor solubility in water and in alcohol. in frozen desserts it will increase the tendency for fat globules to clump, which results in an increase in dryness. it reacts with triglycerides in fatty acids to form soaps. it also functions as a drying agent in foods.

ChEBI: A magnesium hydroxide in which the magnesium atom is bound to two hydroxide groups.

The synthesis of magnesium hydroxide [Mg(OH)2] is based on a metathesis reaction in which magnesium salts are reacted with sodium or potassium hydroxide.
Magnesium hydroxide (Mg(OH)2) has only limited solubility in water and the resulting suspension is called milk of magnesia, which is commonly used as an antacid and is known to be a mild base.
Magnesium hydroxide [Mg(OH)2] is present in antacids because of its laxative properties and is also the main ingredient of the ‘milk of magnesia’. The ‘milk of magnesia’ is a suspension of Mg(OH)2 in water, which has a milk-like appearance because of the low aqueous solubility of Mg(OH)2. It is considered as a strong electrolyte and a weak base and is given to the patient for indigestion and heartburn. The alkaline suspension neutralises any excess stomach acid and therefore works as an antacid. It also stimulates intestinal movement, as the magnesium ions increases the water content in the intestines through its osmotic effect and as a result softens any faeces present.

Magnesium hydroxide in combination with aluminum salts have been used in veterinary medicine for the adjunctive treatment of esophagitis, gastric hyperacidity, peptic ulcer and gastritis. In foals and small animals, because of difficulty in administration, the frequent dosing that is often required, and availability of the histamine- 2 blocking agents (cimetidine, ranitidine, etc.), proton-pump inhibitors (e.g., omeprazole) and sucralfate, antacids have largely been relegated to adjunctive roles in therapy for these indications. Magnesium hydroxide alone (milk of magnesia) is sometimes used as an oral laxative in small animals.
In ruminants, magnesium hydroxide is used to increase rumen pH and as a laxative in the treatment of rumen overload syndrome (aka acute rumen engorgement, rumen acidosis, grain overload, engorgement toxemia, rumen impaction).