Cinnamic acid exists in cis and trans forms. the more stable isomer is the trans isomer, which occurs naturally and is the usual commercial product. It appears as white monoclinic prisms with slight cinnamon aroma. It is soluble in ethanol, methanol, petroleum ether and chloroform; it is easily soluble in benzene, ether, acetone, acetic acid, carbon disulfide and oils but insoluble in water. 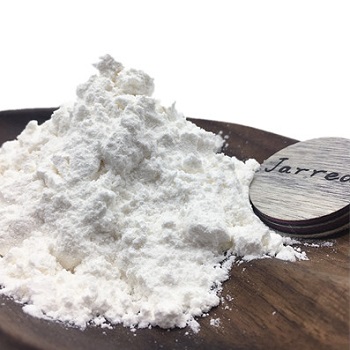 Cinnamic acid was first isolated as crystals from cinnamon oil by Trommsdorf in 1780. He thought it was benzoic acid. Dumas and Peligot ´ identified it in 1835, and in 1856 Bertagnini succeeded in synthesizing it from benzaldehyde and acetyl chloride.
Cinnamic acid undergoes reactions typical of a carboxyl group and an olefinic double bond. The carboxyl group can be esterified to form cinnamates, some of which are important flavorings and fragrances. When reacted with inorganic acid chlorides, such as thionyl chloride or phosphorus chlorides, cinnamic acid gives cinnamoyl chloride [102-92-1]. When heated, cinnamic acid forms styrene [100-42-5] and carbon dioxide. With oxidizing agents or when heated with alkali, the olefinic double bond cleaves to give benzaldehyde [98-87-3].

Cinnamic acid is an important intermediate in the preparation of its esters, which are used as fragrances, for pharmaceuticals, and for the enzymatic production of l-phenylalanine, the starting material for peptide sweeteners. Sodium cinnamate is a known corrosion inhibitor. Cinnamic acid is also used as a brightener in cyanide-free zinc electroplating baths, a corrosion inhibitor during removal of scale from zinc and in aerosol cans, a low-toxicity heat stabilizer for poly(vinyl chloride) , a cross-linking agent for dimethyl terephthalate – ethylene glycol copolymer and polyurethanes, a fireproofing agent for polycaprolactam, in laundry-resistant polyurethane adhesives for polyester fibers, and for improvement of the storage stability of drying-oil-modified alkyd resin coatings.

Cinnamic acid is also produced by Knoevenagel condensation of benzaldehyde with malonic acid in the presence of weakly basic catalysts, such as ammonia and amines.
Reflux together 10ml of benzaldehyde with 10gm of malonic acid and 40ml of 8% ethanolic ammonia solution placed in a 100ml round bottom flask fitted with a reflux condensor on water bath till a clear solution is obtained (about 8-10hours). Set the assembly for downward distillation and distill off the excess alcohol. Continue heating the residual oily portion until the evolution of carbon dioxide ceases. Dissolve the residue in 20ml water, cool and add dilute hydrochloric acid till acidic. Collect the precipitated unsaturated acid on buchner funnel，wash with cold water. Recrystallise from hot water and collect crystals of cinnamic acid, m.p 132°C.

Synthesis of cinnamic acid from benzaldehyde

Accurately weigh 500 mg of sample which have been previously dried for 3 hours in drier filled with silica gel; add 0.1mol/L hydrogen.

GRAS (FEMA).
The acute oral LD50 in rats is 2.5 g/kg, and the acute dermal LD50 in rabbits exceeds 5 g/kg. Cinnamic acid applied neat to intact or abraded rabbit skin for 24 h was slightly irritating;a4% solution in petrolatum produced no sensitization in man.

Commercial synthesis of cinnamic acid almost always results in the trans isomer.
The Perkin reaction is the oldest known method of producing cinnamic acid commercially. In this reaction benzaldehyde [100-52-7] is condensed with acetic anhydride in the presence of sodium acetate as catalyst.
Benzal chloride reacts with alkali acetate in an alkaline medium to give a high yield of cinnamic acid. Cinnamic acid can be obtained by this reaction in the presence of amines such as pyridine in more than 80 % yield.
It can also be prepared through: mixing the benzoylacetone, sodium carbonate and bleach, generating sodium cinnamic acid, followed by processing with sulfate.

Cinnamic acid is a white crystalline organic acid, which is slightly soluble in water.
It is obtained from oil of cinnamon, or from balsams such as storax. It is also found in shea butter and is the best indication of its environmental history and post-extraction conditions. It can also be made synthetically.
Cinnamic acid is used in flavors, synthetic indigo, and certain pharmaceuticals, though its primary use is in the manufacturing of the methyl, ethyl, and benzyl esters for the perfume industry. Cinnamic acid has a honey- like odor; it and its more volatile ethyl ester (ethyl cinnamate) are flavor components in the essential oil of cinnamon, in which related cinnamaldehyde is the major constituent. Cinnamic acid is also part of the biosynthetic shikimate and phenyl propanoid pathways. Its biosynthesis is performed by action of the enzyme phenylalanine ammonia - lyase (PAL) on phenylalanine.
Cinnamic acid is freely soluble in benzene, diethyl ether, acetone, and it is insoluble in hexane.
Cinnamic acid is also a kind of self-inhibitor produced by fungal spore to prevent germination.

Cinnamic acid is almost odorless with a burning taste, and then turning sweet and reminiscent of apricot.

The trans- form has been found among the constituents of the essential oils of basil, Chinese cinnamon, Melaleuca bracteata, Alpinia galanga. It is reported found in Peru balsam, Asian and American storax and cocoa leaves. Also reported found in strawberry fruit, beer, cognac, starfruit (Averrhoa carambola L) and loquat. The cis- form is present in the oil of Alpinia malacensis.

cinnamic acid has sunscreen capabilities. Some manufacturers use it to replace PABA because of its lower allergic and phototoxic reaction incidence. Cinnamic acid is found in cinnamon leaves and cocoa leaves, and is an essential oil of certain mushrooms. It may cause allergic skin rashes.

Cinnamic Acid is a flavoring agent that consists of crystalline scales, white in color, with an odor resembling honey and flowers. it is slightly soluble in water, soluble in alcohol, chloroform, acetic acid, acetone, benzene, and most oils, and alkali salts soluble in water. it is obtained by chemical synthesis. it is also termed 3-phenylpro- penoic acid.

ChEBI: A monocarboxylic acid that consists of acrylic acid bearing a phenyl substituent at the 3-position. It is found in Cinnamomum cassia.

Two isomers, trans- and cis- exist; the trans-isomer is of interest for use in flavoring; in addition to the extraction from natural sources (storax), it can be prepared as follows: (1) from benzaldehyde, anhydrous sodium acetate and acetic anhydride in the presence of pyridine (Perkin reaction); (2) from benzaldehyde and ethyl acetate (Claisen condensation); (3) from benzaldehyde and acetylene chloride; (4) by oxidation of benzylidene acetone with sodium hypochlorite.

Poison by intravenous and intraperitoneal routes. Moderately toxic by ingestion. A skin irritant. Combustible liquid. When heated to decomposition it emits acrid smoke and fumes.

Rainer Ludwig Claisen (1851–1930), German chemist, described for the first time in 1890 the synthesis of cinnamates by reacting aromatic aldehydes with esters. The reaction is known as the Claisen condensation.