Cyclopropane is the simplest possible cyclical hydrocarbon. Though saturated, its cyclical structure endows it with some of the properties associated with unsaturated compounds. It is relatively stable chemically, does not isomerize or polymerize during prolonged storage under normal conditions, and does not react with soda lime in the presence of heat. The gas is colourless, sweet smelling and, in concentrations in excess of 50 percent, is slightly irritant to respiratory mucosa. The molecular weight of the gas is 42.08 and the vapour density (air=1.0) is 1-75 at 20°C (Macintosh, Mushin and Epstein, 1963). The boiling point of liquid cyclopropane is -33°C at a pressure of 760 Torr, and the critical temperature is 125°C. The critical pressure is 54 atmospheres, but at room temperature the gas liquefies when exposed to pressures of 5 lb./sq.in. 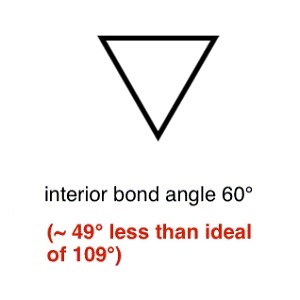 As supplied, the gas is 99.5 percent or more pure, but possible impurities include propylene, allene, cyclohexane, nitrogen, carbon dioxide, and bromor chloropropane. Propylene is the most important contaminant, up to 1 per cent being acceptable, but concentrations over 3 per cent are toxic.

Cyclopropane was discovered by Freund (1882), but the anaesthetic properties of hydrocarbons with the general formula CnH2n were appreciated earlier. John Snow (1858), for example, administered amylene (C5H10) to 238 patients. In 1923, ethylene (C2H4) was introduced into clinical anaesthesia, but its low potency and inflammability restricted its use. At the University of Toronto, research by G. H. W. Lucas and V. E. Henderson on propylene (CH3.CH:CH2) revealed certain samples to show marked cardiac toxicity. Lucas suggested that the toxicity might arise from one of the impurities present in the samples, the cyclic isomer of propylene, cyclopropane. Pure samples of cyclopropane were prepared and this, when tested by Lucas and Henderson, proved to be a more potent and suitable anaesthetic agent than propylene.

Cyclopropane is sparingly soluble in water, but strongly lipophilic. This is shown by a water/gas partition coefficient of 0-204 (Orcutt and Seevers, 1937) and an oil/gas coefficient of 11-2 (Blumberg et al., 1952). The strong lipoid and protein afiBnities of the gas lead not only to the carriage of 2-5 times more cyclopropane by red cells than plasma, but also to a blood/gas partition coefficient which varies with both the haemoglobin concentration and the plasma fat content of blood (Robbins, 1958). The Ostwald solubility coefficient for cyclopropane and whole blood at 37℃, and with 15g Hb per 100 ml, is 0-415 (Posati and Faulconer, 1958).

Cyclopropane is a powerful, nonirritating agent which can produce anaesthesia in a few breaths. It has been used used as an anesthetic, but this use has been discontinued because the gas is dangerous to manufacture and handle.
Cyclopropane has been used as the pseudo-π unsaturated hydrocarbon prototype to study the rotational spectrum of its complex formed with chlorine monofluoride and the similarity of this complex with isotopomers. 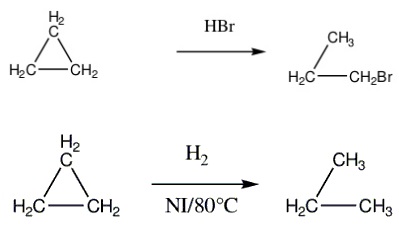 Cyclopropane and cyclobutane react with hydrogen in the presence of a nickel catalyst to produce propane and n-butane respectively.

Stroll quantities of cyclopropane have been prepared from natural deposits of the gas in the United States, but current practice involves the reaction of trimethylene glycol with hydrobromic acid to form1,3-Dibromopropane. The latter compound, in the presence of zinc dust, converts to the cyclic compound, cyclopropane.

Cyclopropane (molecular formula: C3H6) is a kind of cycloalkane molecule. Cyclopropane and propene are isomers of each other. It can be used as a kind of anaesthetic. However, due to its side effect of causing a sudden decrease in blood pressure and potentially causing cardiac dysrhythmia, it has not been available for clinical use since mid-1980 as more. Its mechanism of action is through acting as the NMDA receptor antagonist as well as inhibiting the AMPA receptor, inhibiting the nicotine acetylcholine receptor, and activates certain K2P channels.

Cyclopropane is a gas.

cyclopropane: A colourless gas,C3H6, b.p. –34.5°C, whose moleculescontain a triangular ring of carbonatoms. It is made by treating 1,3-dibromopropanewith zinc metal, andis used as a general anaesthetic.

Cyclopropane is prepared in reagent grade by the reduction of 1,2-dibromocyclopropane with zinc and alcohol.

ChEBI: A cycloalkane composed of three carbon atoms to form a ring.

CYCLOPROPANE is a colorless gas with a petroleum-like odor. CYCLOPROPANE is shipped as a liquid at 4-6 atms. CYCLOPROPANE is easily ignited. The vapors are heavier than air. Contact with the liquid may cause frostbite. CYCLOPROPANE can asphyxiate by the displacement of air and has a narcotic effect in high concentration (formerly used as an anesthetic gas). Under prolonged exposure to fire or intense heat the containers may rupture violently and rocket.

CYCLOPROPANE is incompatible with strong oxidizing agents such as nitric acid. Boiling of the liquid and charring may occur followed by ignition of remaining material and other nearby combustibles. Adsorbed readily by concentrated sulfuric acid [Merck]. In other settings, mostly unreactive. Not affected by aqueous solutions of acids, alkalis, most oxidizing agents, and most reducing agents. When heated sufficiently or when ignited in the presence of air, oxygen or strong oxidizing agents, burns exothermically to produce carbon dioxide and water. Mixtures with oxygen or air may explode [Merck]. Contact of the cold liquefied gas with water may result in vigorous or violent boiling and extremely rapid vaporization due to the large temperature differences involved. If the water is hot, a liquid "superheat" explosion may occur. Pressures may build to dangerous levels if the liquid contacts water in a closed container, [Handling Chemicals Safely, 1980. p. 250].

EXTREMELY FLAMMABLE. Will be easily ignited by heat, sparks or flames. Will form explosive mixtures with air. Vapors from liquefied gas are initially heavier than air and spread along ground. CAUTION: Hydrogen (UN1049), Deuterium (UN1957), Hydrogen, refrigerated liquid (UN1966) and Methane (UN1971) are lighter than air and will rise. Hydrogen and Deuterium fires are difficult to detect since they burn with an invisible flame. Use an alternate method of detection (thermal camera, broom handle, etc.) Vapors may travel to source of ignition and flash back. Cylinders exposed to fire may vent and release flammable gas through pressure relief devices. Containers may explode when heated. Ruptured cylinders may rocket.

Mutation data reported. Questionable carcinogen. High concentrations are narcotic. Human reproductive effects. Very dangerous fire hazard when exposed to heat or flame; can react with oxidizing materials. Explosion Hazard: Moderate in the form of vapor when exposed to heat or flame. To fight fire, stop flow of gas, then use CO2, dry chemical, or water spray. When heated to decomposition it emits acrid smoke and fumes.

Cyclopropane is used as an anesthetic and used to make other chemicals.

UN1027 Cyclopropane, Hazard Class: 2.1; Labels: 2.1-Flammable gas. Cylinders must be transported in a secure upright position, in a well-ventilated truck. Protect cylinder and labels from physical damage. The owner of the compressed gas cylinder is the only entity allowed by federal law (49CFR) to transport and refill them. It is a violation of transportation regulations to refill compressed gas cylinders without the express written per- mission of the owner.

May form explosive mixture with air. Heat, flame, or contact with oxidizers can cause fire and explosion hazard. May accumulate static electrical charges, and may cause ignition of its vapors. Incompatible with oxidizers (chlorates, nitrates, peroxides, permanganates, perchlorates, chlorine, bromine, fluorine, etc.); contact may cause fires or explosions. Keep away from alkaline materi- als, strong bases, strong acids, oxoacids, epoxides.