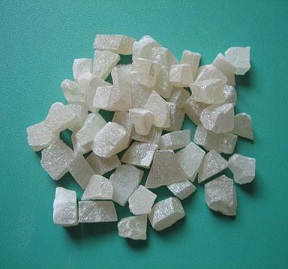 The most important use of Zinc sulfide is as a pigment. As lithopone, a mixture with barium sulfate, it forms a low gloss interior house paint. The pigment, “mineral white” is made by combining zinc sulfide with zinc oxide. Zinc sulfide is incorporated into phosphors to produce luminescence when irradiated with light. It is used in making luminous dials, x-ray and television screens, and fluorescent lights. Also, it is used in making white and opaque glass and as a base for color lakes (which consist of an organic pigment with an inorganic carrier).

Zinc sulfide is well known as an optical coating material for its high refractive index (~2.35 at 500 nm) and very broad transmittance range from 400 nm up to 14 µm. It allows for coatings in the IR and VIS range with good environmental durability, and can be evaporated rapidly from e-beam and resistance heated sources. It is used as a semiconductor and in photo optic applications.
Copperactivated zinc sulfides are the most widely used phosphors for safety purposes.
Zinc sulfide and white lead are sometimes used in coating materials because of their fungicidal properties and to neutralize acid to protect against corrosion.

Zinc sulfide is mined from natural deposits and concentrated by various processes.
Also, zinc sulfide may be prepared in the laboratory by passing hydrogen sulfide through an aqueous solution of a soluble zinc salt, such as zinc chloride or zinc nitrate. The precipitate is filtered, washed, and dried.

Pigment for paints, oilcloths, linoleum, leather, dental rubber, etc., especially in the form of lithopone; mixed with ZnO as "mineral white." Anhydrous zinc sulfide is used in x-ray screens and with a trace of a radium or mesothorium salt in luminous dials of watches; also television screens.

Zinc sulfide (ZnS) is used as a pigment and to make white glass, rubber, and plastics. It is an ingredient in pesticides, luminous paints, and X-ray and television screens.

Production is similar to that of lithopone. A Na2S solution is mixed with a zinc salt solution under precisely controlled conditions. The resulting zinc sulfide precipitate is calcined and processed to give the finished product. Na2S + ZnSO4 →ZnS + Na2SO4.

zinc sulphide: A yellow-whitewater-soluble solid, ZnS. It occursnaturally as sphalerite (see also zincblende) and wurtzite. The compoundsublimes at 1180°C. It is used as apigment and phosphor.

These sulfides are rather inert, dissolve into acid, insoluble in water and alkalis.

Inhalation of material may be harmful. Contact may cause burns to skin and eyes. Inhalation of Asbestos dust may have a damaging effect on the lungs. Fire may produce irritating, corrosive and/or toxic gases. Some liquids produce vapors that may cause dizziness or suffocation. Runoff from fire control may cause pollution.

Some may burn but none ignite readily. Containers may explode when heated. Some may be transported hot.

Zinc sulfide(Sachtolith) is mainly used in plastics. Functional properties such as lightening and hiding power are criteria for the use of Sachtolith. It has proved to be very useful for coloring many thermoplasts. During the dispersion process it does not cause abrasion of metallic production machinery or adversely effect the polymer, even at high operating temperatures or during multistage processing. Even ultrahigh molecular mass thermoplasts can be colored without problems. In glass-fiber-reinforced plastics, the soft texture of Sachtolith prevents mechanical fiber damage during extrusion. Sachtolith is also used as a dry lubricant during the fabrication of these materials.
The low abrasiveness of Sachtolith prolongs the operating life of stamping tools used in the manufacture of industrial rubber articles. The lightfastness and ageing resistance of many elastomers are improved by using Sachtolith. It is also used as a dry lubricant for roller and plain bearings, and as a white pigment for greases and oils.

The use of zinc sulfide and barium sulfate in contact with foods is permitted by the FDA (United States) and in most European countries. Some restrictions apply in France, Italy, the United Kingdom, and Czechoslovakia.
Soluble zinc is toxic in large amounts, but the human body requires small quantities (10–15 mg d−1) for metabolism. Zinc sulfide is harmless in the human due to its low solubility. The acid concentration in the stomach and the rate of dissolution following ingestion are not sufficient to produce physiologically significant quantities of soluble zinc. LD50 values in the rat exceed 15 g kg−1. No cases of poisoning or chronic damage to health have been observed in the manufacture of zinc sulfide pigments.