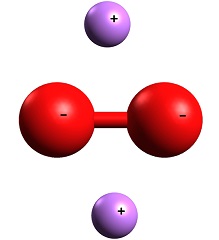 Lithium peroxide, Li2O2, Mr 45.9, 2.36 g/cm3, has an active oxygen content of 34.8%, which is the highest of all metal peroxides. Lithium peroxide is pale yellow solid, stable at ambient temperature, and not hygroscopic. On heating to about 300 °C, it loses oxygen and forms lithium monoxide.

At this time no important industrial uses of lithium peroxide are known. One interesting potential application is in the field of atmosphere regeneration for undersea and space applications, since the compound reacts with carbon dioxide to release oxygen: Li2O2+C02 -> Li2CO3 + 0.5O2.

Lithium peroxide is strongly basic and an extremely powerful oxidizing agent. Accelerates the combustion of other materials, especially organic materials, involved in a fire. Can ignite wood, paper, oil, clothing, etc. on contact. May react explosively with hydrocarbons (fuels). Exposure to heat in a closed container may result in a vigorous reaction that violently ruptures the container.

TOXIC; inhalation, ingestion or contact (skin, eyes) with vapors, dusts or substance may cause severe injury, burns or death. Fire may produce irritating and/or toxic gases. Toxic fumes or dust may accumulate in confined areas (basement, tanks, hopper/tank cars, etc.). Runoff from fire control or dilution water may cause pollution.

May explode from friction, heat or contamination. These substances will accelerate burning when involved in a fire. May ignite combustibles (wood, paper, oil, clothing, etc.). Some will react explosively with hydrocarbons (fuels). Containers may explode when heated. Runoff may create fire or explosion hazard.

A powerful oxidizer and irritant to skin, eyes, and mucous membranes. A very dangerous fire hazard because it is an extremely powerful oxidizing agent. Will react with water or steam to produce heat; on contact with reducing materials, can react vigorously. See also LITHIUM COMPOUNDS, PEROXIDES, and PEROXIDES, INORGANIC.