Dichlorodifluoromethane is known as CFC-12, also called R-12, or Freon-12. R-12 is a general name for Refrigerant-12. Freon is a trade name for DuPont. CFC stands for chlorofl uorocarbons, which are nontoxic, nonfl ammable, synthetic chemicals containing atoms of carbon, chlorine, and fluorine.CFC use climbed steadily worldwide as it was incorporated in refrigeration and air conditioning, as well as being used as propellants, blowing agents, and solvents. 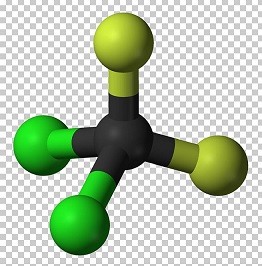 Dichlorodifluoromethane is a colorless, nonflammable gas. Ethereal odor at .20% by volume. Shipped as a compressed gas

CFCs were developed in the 1930s as coolants for refrigerator, freezer, and motor vehicle air conditioners.they subsequently found use as metal cleaners, degreasers, propellants, solvents, and blowing agents in the production of foams. CFCs have received widespread environmental attention because of their potential to deplete stratospheric ozone.

The basic chemistry on producing fluorinated organic compounds was discovered at the end of the 19th century.the Belgian chemist Frédéric Swarts (1866 1940) had produced CFC compounds in the 1890s. Swarts discovered that pentavalent antimony catalyzed the fluorination of chlorinated organic compounds. The synthesis of fl uorocarbon refrigerants was announced in April 1930. the Freon name was filed for in 1931 by DuPont and registered in 1932. Closely related compounds were introduced over the next several years: CFC-11 (1932), CFC- 114 (1933), and CFC-113 (1934).

A colorless gas having a faint ethereal odor. Shipped as a liquid confined under its own vapor pressure. Contact with the unconfined liquid can cause frostbite. Both components are noncombustible. Can asphyxiate by the displacement of air. Exposure of the closed container to prolonged heat or fire can cause Dichlorodifluoromethane to rupture violently and rocket.

The liquefied gas poured into water can be violently explosive. This is due to the phase transition from superheated liquid to vapor.

INHALATION: some narcosis when 10% in air is breathed.

Dichlorodifluoromethane, dichlorotetrafluoroethane, and trichloromonofluoromethane have been used for over 50 years as propellants in topical, oral, and nasal aerosol formulations, and are generally regarded as nontoxic and nonirritant materials when used as directed.
The propellants used for metered-dose inhalant aerosol products generally vaporize quickly and most of the vapors escape and are not inhaled. However, a small amount of the propellant may be inhaled with the active ingredient and be carried to the respiratory system. These amounts of propellant do not present a toxicological problem and are quickly cleared from the lungs. Deliberate inhalation of excessive quantities of fluorocarbon propellant may result in death, and the following ‘warning’ statements must appear on the label of all aerosols:
WARNING: Avoid inhalation. Keep away from eyes or other mucous membranes.
(Aerosols designed specifically for oral inhalation need not contain this statement).
WARNING: Do not inhale directly; deliberate inhalation of contents can cause death.
or
WARNING: Use only as directed; intentional misuse by deliberately concentrating and inhaling the contents can be harmful or fatal.
Additionally, the label should contain the following information:
WARNING: Contents under pressure. Do not puncture or incinerate container. Do not expose to heat or store at room temperature above 120°F (498℃). Keep out of the reach of children.
In the USA, the Environmental Protection Agency (EPA) additionally requires the following information on all aerosols containing chlorofluorocarbons as the propellant:
WARNING: Contains a chlorofluorocarbon that may harm the public health and environment by reducing ozone in the upper atmosphere.

Dichlorodifluoromethane is used as an aerosol propellant, refrigerant and foaming agent

Surface Water. Estimated half-lives of dichlorodifluoromethane from an experimental marine mesocosm during the spring (8–16 °C) and winter (3–7 °C) were 20 and 13 d, respectively (Wakeham et al., 1983).

Chlorofluorocarbon propellants are nonreactive and stable at temperatures up to 5508℃. The liquefied gas is stable when used as a propellant and should be stored in a metal cylinder in a cool, dry place.

UN1028 Dichlorodifluoromethane or Refrigerant gas R-12, Hazard class: 2.2; Labels: 2.2-Nonflammable compressed gas. Cylinders must be transported in a secure upright position, in a well-ventilated truck. Protect cylinder and labels from physical damage. The owner of the compressed gas cylinder is the only entity allowed by federal law (49CFR) to transport and refill them. It is a violation of transportation regulations to refill compressed gas cylinders without the express written permission of the owner

Pass the gas through saturated aqueous KOH then conc H2SO4, and a tower packed with activated copper on Kielselguhr at 200o removed CO2 and O2. A trap cooled to -29o removed a trace of high boiling material. It is a non-flammable propellant.

The presence of greater than 5% water in solutions that contain trichloromonofluoromethane may lead to hydrolysis of the propellant and the formation of traces of hydrochloric acid, which may be irritant to the skin or cause corrosion of metallic canisters. Trichloromonofluoromethane may also react with aluminum, in the presence of ethanol, to cause corrosion within a cylinder with the formation of hydrogen gas. Similarly, alcohols in the presence of trace amounts of oxygen, peroxides, or other free-radical catalysts may react with trichloromonofluoromethane to form trace quantities of hydrochloric acid.
Both dichlorodifluoromethane and dichlorotetrafluoroethane are compatible with most ingredients used in pharmaceutical aerosols. Because of their poor miscibility with water, most MDIs are formulated as suspensions. However, solution MDIs can be prepared through the use of ethanol as a cosolvent for water and propellant, resulting in a clear solution (provided the water content is less than 5%).

Return refillable compressed gas cylinders to supplier. Incineration, preferably after mixing with another combustible fuel. Care must be exercised to assure complete combustion to prevent the formation of phosgene. An acid scrubber is necessary to remove the halo acids produced. Because of potential ozone decomposition in the stratosphere, R-12 should be released to the atmosphere only as a last resort. Consult with environmental regulatory agencies for guidance on acceptable disposal practices. Generators of waste containing this contaminant (≥100 kg/mo) must conform with EPA regulations governing storage, transportation, treatment, and waste disposal

Included in the FDA Inactive Ingredients Database (aerosol formulations for inhalation, nasal, oral, and topical applications). With few exceptions for existing MDIs, the FDA and EPA have banned the use of CFCs in the USA after 31st December 2008, with all CFCs to be phased out by 2010–2015. Included in nonparenteral medicines licensed in the UK.