Titanium was discovered in 1790 by English chemist William Gregor. Five years later in 1795, Klaproth confirmed Gregor’s findings from his independent investigation and named the element titanium after the Latin name Titans, the mythical first sons of the Earth. The metal was prepared in impure form first by Nilson and Pettersson in 1887. Hunter, in 1910, prepared the metal in pure form by reducing titanium tetrachloride with sodium. 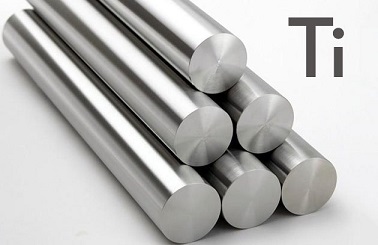 Titanium occurs in nature in the minerals rutile( TiO2), ilmenite (FeTiO3), geikielite, (MgTiO3) perovskite (CaTiO3) and titanite or sphene (CaTiSiO4(O,OH,F)). It also is found in many iron ores. Abundance of titanium in the earth’s crust is 0.565%. Titanium has been detected in moon rocks and meteorites. Titanium oxide has been detected in the spectra of M-type stars and interstellar space.
Titanium is found in plants, animals, eggs, and milk.
Many titanium alloys have wide industrial applications. Titanium forms alloys with a number of metals including iron, aluminum, manganese, and molybdenum. Its alloys are of high tensile strength, lightweight, and can withstand extreme temperatures. They are used in aircraft and missiles. The metal also has high resistance to sea water corrosion and is used to protect parts of the ships exposed to salt water. Also, titanium is used to combine with and remove traces of oxygen and nitrogen from incandescent lamps. Titanium compounds, notably the dioxide and the tetrachloride, have many uses (See Titanium Dioxide and Titanium Tetrachloride.)

The production of titanium always encounters difficulties because of a tendency to react with oxygen, nitrogen and moisture at elevated temperatures. Most high purity elemental titanium can be produced by the Kroll process from titanium tetrachloride. The tetrachloride is reduced with magnesium in a mild steel vessel at about 800°C under an inert atmosphere of helium or argon. The net reaction is as follows:
TiCl4 + 2Mg → Ti + 2 MgCl2
The reaction is highly exothermic providing heat needed to maintain high temperature required for reaction. The Kroll process is applied commercially to produce elemental titanium.
Sodium metal can be used instead of magnesium in thermally reducing titanium tetrachloride.
Titanium metal also can be produced by electrolytic methods. In electrolysis, fused mixtures of titanium tetrachloride or lower chlorides with alkaline earth metal chlorides are electrolyzed to produce metal. Also, pure titanium can be prepared from electrolysis of titanium dioxide in a fused bath of calcium-, magnesiumor alkali metal fluorides. Other alkali or alkaline metal salts can be substituted for halides in these fused baths. Other titanium compouds that have been employed successfully in electrolytic titanium production include sodium fluotitanate and potassium fluotitanate.
Very highly pure titanium metal can be prepared in small amounts by decomposition of pure titanium tetraiodide, (TiI4) vapor on a hot wire under low pressure (Van Arkel–de Boer method).

Titanium metal is very highly resistant to corrosion. It is unaffected by atmospheric air, moisture and sea water, allowing many of its industrial applications. The metal burns in air at about 1,200°C incandescently forming titanium dioxide TiO2. The metal also burns on contact with liquid oxygen. Titanium forms four oxides, all of which have been well described. It forms a weakly basic monoxide, TiO; a basic dititanium trioxide, Ti2O3; the amphoteric dioxide, TiO2; and the acidic trioxide, TiO3.
Titanium combines with nitrogen at about 800°C forming the nitride and producing heat and light. It is one of the few elements that burns in nitrogen. Titanium reacts with all halogens at high temperatures. It reacts with fluorine at 150°C forming titanium tetrafluoride, TiF4. Reaction with chlorine occurs at 300°C giving tetrachloride TiCl4. Bromine and iodine combine with the metal at 360°C forming their tetrahalides.
Water does not react with Ti metal at ambient temperatures, but tianium reacts with steam at 700°C forming the oxide and hydrogen:
Ti + 2H2O → TiO2 + 2H2
Titanium is soluble in hot concentrated sulfuric acid, forming sulfate. It also reacts with hydrofluoric acid forming the fluoride.
Nitric acid at ordinary temperatures does not react with Ti metal, but hot concentrated nitric acid oxidizes titanium to titanium dioxide.
The metal is stable with alkalies.
Titanium combines with several metals, such as, iron, copper, aluminum, chromium, cobalt, nickel, lead and tin at elevated temperatures forming alloys.

Positioned at the top of group 4 (IVB), titanium heads up a group of metals sometimesreferred to as the “titanium group.” Members of this group have some similar properties.Titanium’s density is 4.5 g/cm3, which makes it heavier than aluminum but not as heavy asiron. Its melting point is high at 1,660°C, and its boiling point is even higher at 3287°C.Titanium metal is harder than steel but much lighter and does not corrode in seawater,which makes it an excellent alloy metal for use in most environmental conditions. It is alsoparamagnetic, which means that it is not responsive to magnetic fields. It is not a very goodconductor of heat or electricity.

It was named after “Titans,” meaning the first sons of the Earth as stated in Greek mythology.

Titanium is the ninth most abundant element found in the Earth’s crust, but not in pureform. It is found in two minerals: rutile, which is titanium dioxide (TiO2), and ilmenite(FeTiO3). It is also found in some iron ores and in the slag resulting from the productionof iron. The mineral rutile is the major source of titanium production in the United States.Although titanium is widely spread over the crust of the Earth, high concentrations of itsminerals are scarce. In the past it was separated from it ores by an expensive process ofchemical reduction that actually limited the amount of metal produced. A two-step processinvolves heating rutile with carbon and chlorine to produce titanium tetrachloride—TiO2+ C + 2Cl2 ?→ TiCl4 + CO2—which is followed by heating the titanium tetrachloridewith magnesium in an inert atmosphere: TiCl4 + 2Mg ?→ Ti + 2 MgCl2. As recently as theyear 2000, a method of electrolysis was developed using titanium tetrachloride in a bath ofrare-earth salts. This process can be used on a commercial scale that makes the productionof titanium much less expensive. Titanium was, and still is, a difficult element to extractfrom its ore.Titanium is found throughout the universe and in the stars, the sun, the moon, and themeteorites that land on Earth.

As the first element in group 4, titanium has characteristics similar to those of the othermembers of this group: Zr, Hf, and Rf. Titanium is a shiny, gray, malleable, and ductile metalcapable of being worked into various forms and drawn into wires.

In 1791 Reverend William Gregor (1761–1817), an amateur mineralogist, discoveredan odd black sandy substance in his neighborhood. Because it was somewhat magnetic, hecalculated that it was almost 50% magnetite (a form of iron ore). Most of the remainder ofthe sample was a reddish-brown powder he dissolved in acid to produce a yellow substance.Thinking he had discovered a new mineral, he named it “menachanite,” after the Menachanregion in Cornwall where he lived. During this period, Franz Joseph Muller (1740–1825) alsoproduced a similar substance that he could not identify. In 1793 Martin Heinrich Klaproth(1743–1817), who discovered several new elements and is considered the father of modernanalytical chemistry, identified the substance that Gregor called a mineral as a new element.Klaproth named it “titanium,” which means “Earth” in Latin.

Given titanium’s lightness, strength, and resistance to corrosion and high temperatures, itsmost common use is in alloys with other metals for constructing aircraft, jet engines, and missiles. Its alloys also make excellent armor plates for tanks and warships. It is the major metalused for constructing the stealth aircraft that are difficult to detect by radar.Titanium’s noncorrosive and lightweight properties make it useful in the manufacture oflaboratory and medical equipment that will withstand acid and halogen salt corrosion. Thesesame properties make it an excellent metal for surgical pins and screws in the repair of brokenbones and joints.It has many other uses as an abrasive, as an ingredient of cements, and as a paint pigmentin the oxide form and in the paper and ink industries, in batteries for space vehicles, andwherever a metal is needed to resist chlorine (seawater) corrosion.

As alloy with copper and iron in titanium bronze; as addition to steel to impart great tensile strength; to aluminum to impart resistance to attack by salt solutions and by organic acids; to remove traces of oxygen and nitrogen from incandescent lamps. Surgical aid (fracture fixation).

Titanium is added to steel and aluminumto enhance their tensile strength and acidresistance. It is alloyed with copper and ironin titanium bronze.

Titanium is the ninth most abundant element and accounts for about 0.63% of the Earth’s crust. Analyses of rock samples from the moon indicate that titanium is far more abundant there; some lunar rocks consist of 12% titanium by weight. World production of titanium sponge metal was estimated at 69,000 metric tons in 1991. The most important titaniumbearing minerals are ilmenite, rutile, and leucoxene. Ilmenite (FeTiO3) is found in beach sands (Australia, India, and Florida) and in rock deposits associated with iron (Norway and Finland). Ilmenite accounts for about 91%of the world’s consumption of titanium minerals and world resources of anatase, ilmenite, and rutile total more than 2 billion tons. Rutile (a form ofTiO2) is less abundant; its chief source is certain Australian beach sands. Two other less prominent forms of TiO2 exist, anatase and brookite. The ores vary around the world in TiO2 content from 39% to 96%. Anatase is used as a food color.

A silvery transition metal that occurs in various ores as titanium(IV) oxide and also in combination with iron and oxygen. It is extracted by conversion of titanium(IV) oxide to the chloride, which is reduced to the metal by heating with sodium. Titanium is reactive at high temperatures. It is used in the aerospace industry as it is strong, resistant to corrosion, and has a low density. It forms compounds with oxidation states +4, +3, and +2, the +4 state being the most stable. Symbol: Ti; m.p. 1660°C; b.p. 3287°C; r.d. 4.54 (20°C); p.n. 22; r.a.m. 47.867.

TITANIUM is a gray lustrous powder. TITANIUM can be easily ignited and burns with an intense flame. The very finely powdered material may be ignited by sparks.

TITANIUM reacts violently with cupric oxide and lead oxide when heated. When titanium is heated with potassium chlorate, potassium nitrate, or potassium permanganate, an explosion occurs [Mellor 7:20. 1946-47]. The residue from the reaction of titanium with red fuming nitric acid exploded violently when the flask was touched [Allison 1969]. Liquid oxygen gives a detonable mixture when combined with powdered titanium, [Kirchenbaum 1956].

Almost all of titanium’s compounds, as well as the pure metal when in powder form, areextremely flammable and explosive. Titanium metal will ignite in air at 1200°C and willburn in an atmosphere of nitrogen. Titanium fires cannot be extinguished by using water orcarbon dioxide extinguishers. Sand, dirt, or special foams must be used to extinguish burningtitanium.

Fire will produce irritating, corrosive and/or toxic gases. Inhalation of decomposition products may cause severe injury or death. Contact with substance may cause severe burns to skin and eyes. Runoff from fire control may cause pollution.

Flammable/combustible material. May ignite on contact with moist air or moisture. May burn rapidly with flare-burning effect. Some react vigorously or explosively on contact with water. Some may decompose explosively when heated or involved in a fire. May re-ignite after fire is extinguished. Runoff may create fire or explosion hazard. Containers may explode when heated.

Titanium metal, because of its low weight, high strength, and heat resistance, is used in the aerospace and aircraft industry as tubing, fittings, fire walls; cowlings, skin sections; jet compressors; and it is also used in surgical appliances. It is used, too, as controlwire casings in nuclear reactors, as a protective coating for mixers in the pulp-paper industry and in other situations in which protection against chlorides or acids is required; in vacuum lamp bulbs and X-ray tubes; as an addition to carbon and tungsten in electrodes and lamp filaments; and to the powder in the pyrotechnics industry. It forms alloys with iron, aluminum, tin, and vanadium, of which ferrotitanium is especially important in the steel industry. Other titanium compounds are utilized in smoke screens, as mordants in dyeing; in the manufacture of cemented metal carbides; as thermal insulators; and in heat resistant surface coatings in paints and plastics.