Trimethylsilyl cyanide (TMSCN) is a commercial reagent used as cyanide source for nucleophilic reactions. It is a clear colorless to yellow liquid, moisture sensitive, with a boiling point of 114–117 °C, which was first synthetized by the reaction of trimethylsilicon halides TMSX and AgCN in 1952. 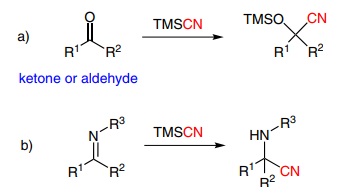 TMSCN is a versatile reagent that can be used in several different reactions, but it is generally used in nucleophilic additions to aldehydes, ketones and imines to form cyanohydrin silyl ethers (Scheme 1a) and α-aminonitriles in Strecker-type reactions (Scheme 1b).

Reacts with aldehydes and ketones to give cyanohydrin-TMS ethers which can be reduced to β-aminoethyl alcohols.
Trimethylsilyl cyanide (TMSCN)  participates in carbonyl aminomethylation via α-silyloxy nitriles.
TMSCN can be used as a reagent in the:
Trimethylsilyl cyanide was used in the second step of an oxidative Michael addition of cyanide anion to Baylis–Hillman adducts. The importance of the addition of cyanide to α,β-unsaturated carbonyl derivatives is that the products can be converted into a variety of compounds including γ-aminobutyric acids. The reaction took place in a liquid ionic medium ([bmim]Br), which was reused several times without losing its activity. The β-cyano carbonyl compounds were obtained with high regioselectivity and yields (>79%).

Trimethylsilyl Cyanide is used as a reagent in the synthesis of optically active cyanohydrins. Used in the preparation of Reissert compounds, which represent reactive polyamides. Toxic to humans.

Trimethylsilyl cyanide is a useful silicon reagent which reacts readily with aldehydes and ketones in the presence of catalytic amounts of Lewis acids or of cyanide ion, to give the trimethylsilyl ethers of the corresponding cyanohydrins (Evans,Carroll and Truesdale,1974).Even normally unreactive ketones react readily with trimethylsilyl cyanide due to the formation of the strong Si-O bond which displaces the equilibrium in favour of the derivative.The reaction provides a valuable alternative to the base-catalysed addition of hydrogen cyanide to carbonyl compounds which often gives only poor yields.Tetralone，for example,is reported not to form a cyanohydrin, but it gives a trimethylsilyl derivative in excellent yield.The silylated cyanohydrins can be hydrolysed to a-hydroxy acids(Corey, Crouse and Anderson,1975) and on reduction with lithium aluminium hydride they afford the corresponding 3-amino alcohols in excellent yield.This sequence provides a better route to these valuable intermediates (they are used in the ring expansion of cyclo- alkanones)than the classical methods through reaction of hydrogen cyanide or nitromethane with the carbonyl compound.The derivatives from aromatic aldehydes are excellent acyl anion equivalents and have been used in 'umpolung' conversion of aldehydes into ketones and acyloins by reaction of the derived anions with alkyl halides and aldehydes or ketones (Deuchert et al，1979;Hnig and Wehner,1979).