Propane is colourless and odourless, with a mercaptan odour. Like all fossil fuels, propane is a non-renewable energy source. Propane is a gas derived from natural gas and petroleum. It is found mixed with natural gas and petroleum deposits. Propane is called a ‘fossil fuel’ because it was formed millions of years ago from the remains of tiny sea animals and plants. Propane is a clean-burning, versatile fuel. It is used by nearly everyone, in homes, on farms, by business, and in industry mostly for producing heat and operating equipment. Propane is one of the many fossil fuels included in the liquefied petroleum gas (LPG) family. Because propane is the type of LPG most commonly used in the United States, propane and LPG are often used synonymously. Butane is another LPG often used in lighters.

Propane is a colorless gas that is odorless when pure (a foul-smelling odorant is often added). 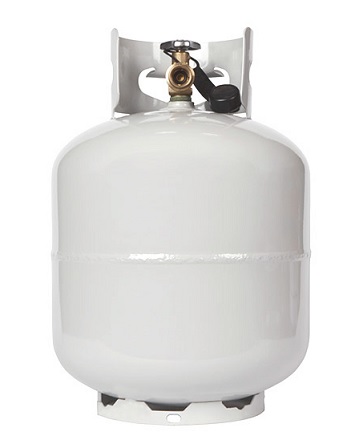 Propane is released to the living environment from automobile exhausts, burning furnaces, natural gas sources, and during combustion of polyethylene and phenolic resins. Propane is both highly inflammable and explosive and needs proper care and management of workplaces. Its use in industry includes as a source for fuel and propellant for aerosols. Occupational workers exposed to liquefi ed propane have demonstrated skin burns and frostbite. Propane also causes depression effects on the CNS.

Propane is a colorless, odorless, flammable gas that follows methane and ethane in the alkane series. The root word prop comes from the three-carbon acid propionic acid, CH3CH2COOH. Propionic acid comes from the Greek words protos meaning first and pion meaning fat.It was the smallest acid with fatty acid properties. Propane is the gas used to fuel barbecues and camp stoves giving it the common name bottled gas.It is marketed as liquefied petroleum gas (LPG) or liquefied petroleum; it should be noted that LPG is often a mixture that may contains butane, butylene, and propylene in addition to propane. In addition to cooking, propane can be used as an energy source for space heating, refrigeration, transportation, and heating appliances (clothes dryer).
Propane can be stored as liquid in pressurized (approximately 15 atmospheres) storage tanks and/or at cold temperatures and vaporizes to a gas at atmospheric pressure and normal temperatures. This makes it possible to store a large volume of propane as a liquid in a relatively small volume; propane as a vapor occupies 270 times the volume of propane in liquid form. This makes liquid propane an ideal fuel for transport and storage until needed.

Propane demonstrates that the carbon atoms have different characteristics in alkanes with more than two carbon atoms. The terminal carbon atoms in propane are bonded to three hydrogen atoms and one carbon atom. A carbon atom bonded to only one other carbon atom is referred to as a primary or 1° carbon. The central carbon atom in propane is bonded to two other carbon atoms and is called a secondary or 2° carbon. A hydrogen atom has the same classifi cation as the carbon atom to which it is attached. Thus the hydrogen atoms attached to the terminal carbon atoms in propane are called primary (1°) hydrogens, whereas the central atom has secondary (2°) hydrogen. The diff erence in bonds leads to diff erences in reactions and properties of diff erent isomers. For example, breaking a primary bond requires more energy than breaking a secondary bond in propane. This makes formation of the isopropyl radical CH3CHCH3• easier than the n-propyl radical, CH3CH2CH2•. Even though the formation of the isopropyl is more favorable energetically, the greater number of primary hydrogen atoms leads to approximately equal amounts of n-propyl and isopropyl radicals formed under similar reaction conditions.
Oxidation of propane can produce various oxygenated compounds under appropriate conditions, but generally alkanes are relatively unreactive compared to other organic groups. Some of the more common oxidation products include methanol (CH3OH), formaldehyde (CH2O), and acetaldehyde (C2H4O). Propane can be converted to cyclopropane by conversion to 1,3 dichloro-propane using zinc dust and sodium iodine ClCH2CH2CH2Cl--Zn. Nacl--cyclopropane.

Propane has been used as a transportation fuel since its discovery. It was first used as an automobile fuel in 1913. It follows gasoline and diesel as the third most popular vehicle fuel and today powers more than half a million vehicles in the United States and 6 million worldwide. The widespread use of propane is hampered by the lack of a distribution system, but it has been used to fuel fleets of buses, taxis, and government vehicles. Also, it is heavily used to power equipment such as forklifts. Propane is cleaner burning than gasoline or diesel and has been used to reduce urban air pollution. Compared to gasoline it emits 10–40% of the carbon monoxide, 30–60% of the hydrocarbons, and 60–90% of the carbon dioxide. An advantage of cleaner burning propane is that engine maintenance is improved because of lower engine deposits and fouling. Propane’s octane ratings range between 104 and 110. The lower emissions are somewhat compromised by propane’s lower energy value; propane has about 75% of the energy content of gasoline when compared by volume. Propane is separated from natural gas and is also produced during petroleum processing. Approximately 53% of the propane produced in the United States comes from the small fraction (less than 5%) found in natural gas and the remainder comes petroleum refining.

Propane is used as a fuel gas, as a refrigerant,and in organic synthesis.

Propane’s greatest use is not as a fuel but in the petrochemical industry as a feedstock. Asan alkane, it undergoes typical alkane reactions of combustion, halogenation, pyrolysis, andoxidation.

A colorless gas with a faint petroleum-like odor. PROPANE is shipped as a liquefied gas under its vapor pressure. For transportation PROPANE may be stenched. Contact with the unconfined liquid can cause frostbite by evaporative cooling. Easily ignited. The vapors are heavier than air and a flame can flash back to the source of leak very easily. The leak may be either a liquid or vapor leak. The vapors can asphyxiate by the displacement of air. Under prolonged exposure to fire or heat the containers may rupture violently and rocket.

Propane is a nontoxic gas. It is an asphyxiate.At high concentrations it shows narcoticeffects.

Vaporizing liquid may cause frostbite. Concentrations in air greater than 10% cause dizziness in a few minutes. 1% concentrations give the same effect in 10 min. High concentrations cause asphyxiation.

Behavior in Fire: Containers may explode. Vapor is heavier than air and may travel a long distance to a source of ignition and flash back.

Central nervous system effects at high concentrations. An asphyxiant. Flammable gas. Highly dangerous fire hazard when exposed to heat or flame; can react vigorously with oxidizers. Explosive in the form of vapor when exposed to heat or flame. Explosive reaction with ClO2. Violent exothermic reaction with barium peroxide + heat. To fight fire, stop flow of gas. When heated to decomposition it emits acrid smoke and irritating fumes.

Propane is an anesthetic and is nonirritating to the eyes, nose, or throat. Direct skin or mucous membrane contact with liquefied propane causes burns and frostbite. At air concentration levels below 1000 ppm, propane exerts very little physiological action. At very high levels, propane has CNS depressant and asphyxiating properties; its target organ is the central nervous system.

Biological. In the presence of methane, Pseudomonas methanica degraded propane to 1- propanol, propionic acid, and acetone (Leadbetter and Foster, 1959). The presence of carbon dioxide was required for “Nocardia paraffinicum” to degrade propane to propionic acid (MacMichael and Brown, 1987). Propane may biodegrade in two pathways. The first is the formation of propyl hydroperoxide, which decomposes to 1-propanol followed by oxidation to propanoic acid. The other pathway involves dehydrogenation to 1-propene, which may react with water giving propanol (Dugan, 1972). Microorganisms can oxidize alkanes under aerobic conditions (Singer and Finnerty, 1984). The most common degradative pathway involves the oxidation of the terminal methyl group forming the corresponding alcohol (1-propanol). The alcohol may undergo a series of dehydrogenation steps forming an aldehyde (propionaldehyde), then a fatty acid (propionic acid). The fatty acid may then be metabolized by β-oxidation to form the mineralization products carbon dioxide and water (Singer and Finnerty, 1984).
Photolytic. When synthetic air containing propane and nitrous acid was exposed to artificial sunlight (λ = 300–450 nm), propane photooxidized to acetone with a yield of 56% (Cox et al., 1980). The rate constants for the reaction of propane and OH radicals in the atmosphere at 298 and 300 K were 1.11 x 10-12 cm3/molecule?sec (DeMore and Bayes, 1999) and 1.3 x 10-12 cm3/molecule?sec (Hendry and Kenley, 1979). Cox et al. (1980) reported a rate constant of 1.9 x 10-12 cm3/molecule?sec for the reaction of gaseous propane with OH radicals based on a value of 8 x 10-12 cm3/molecule?sec for the reaction of ethylene with OH radicals.
Chemical/Physical. Incomplete combustion of propane in the presence of excess hydrogen chloride resulted in a high number of different chlorinated compounds including, but not limited to alkanes, alkenes, monoaromatics, alicyclic hydrocarbons, and polynuclear aromatic hydrocarbons. Without hydrogen chloride, 13 nonchlorinated polynuclear aromatic hydrocarbons were formed (Eklund et al., 1987).
Complete combustion in air yields carbon dioxide and water.

UN1978 Propane, Hazard Class: 2.1; Labels: 2.1-Flammable gas. UN1075 Petroleum gases, liquefied or Liquefied petroleum gas, Hazard Class: 2.1; Labels: 2.1-Flammable gas. Cylinders must be transported in a secure upright position, in a well-ventilated truck. Protect cylinder and labels from physical damage. The owner of the compressed gas cylinder is the only entity allowed by federal law (49CFR) to transport and refill them. It is a violation of transportation regulations to refill compressed gas cylinders without the express written permission of the owner.

Return refillable compressed gas cylinders to supplier. Dissolve or mix the material with a combustible solvent and burn in a chemical incinerator equipped with an afterburner and scrubber. All federal, state, and local environmental regulations must be observed.