Naphthalene is a white solid chemical that vaporizes easily. It has a strong smell. You can sometimes smell naphthalene in the air or in water. Called white tar and tar camphor, naphthalene is used in mothballs and moth flakes. Petroleum and coal contain naphthalene. 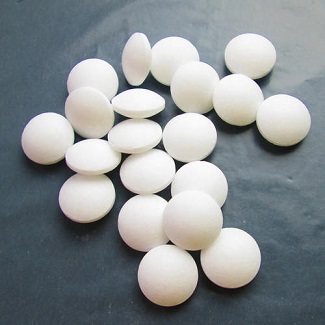 Naphthalene is a crystalline, white, flammable, polycyclic aromatic hydrocarbon consisting of two fused benzene rings. It has a pungent odor and sublimes readily above its melting point; it has been traditionally used in moth balls and is responsible for the moth balls characteristic odor. Naphthalene is a natural component of fossil fuels and is the single most abundant component of coal tar, accounting for approximately 11% of dry coal tar.

Most of the data available on the toxic effects of naphthalene have been derived from animal studies conducted either in vivo or with in vitro preparations.
Rats and mice breathing naphthalene vapors daily for a lifetime had irritated noses and nose tumors and irritated lungs. Some female mice had lung tumors. Some animals got cloudy eyes after ingesting it.
It is not clear if naphthalene causes reproductive problems in animals. Although there is no direct data showing that naphthalene can cause cancer in people, naphthalene exposure can lead to cancer in animals.
Exposure to large amounts of naphthalene may damage or destroy red blood cells, a condition called hemolytic anemia. Symptoms of hemolytic anemia are feeling very tired or restless, lack of appetite, and pale skin. Exposure to large amounts of naphthalene may also cause upset stomach, diarrhea, blood in the urine,and yellow-colored skin. Very young children and unborn children are at higher risk if they are exposed to naphthalene, especially if they ingest the chemical. Some infants have become ill when they were close to clothing or blankets stored in naphthalene mothballs.

Naphthalene is a white solid substance with a strong smell. Poisoning from naphthalene destroys or changes red blood cells so they cannot carry oxygen. This can cause organ damage.
In humans, naphthalene is broken down to alpha-naphthol, which is linked to the development of hemolytic anemia. Kidney and liver damage may also occur. Alpha-naphthol and other metabolites are excreted in urine.
In animals, naphthalene breaks down into other compounds including alpha-naphthol, which may affect the lungs and eyes. Naphthalene was found in the milk of exposed cows, but the residues disappeared quickly after the cows were no longer exposed. Nearly all the naphthalene was broken down into other compounds and excreted in their urine.

Naphthalene occurs as transparent prismatic plates also available as white scales, powder balls, or cakes with a characteristic mothball or strong coal tar and aromatic odour. It is sparingly soluble in water but soluble in methanol/ethanol and very soluble in ether. Naphthalene is a commercially important aromatic hydrocarbon. Naphthalene occurs as a white solid or powder. Naphthalene occurs in coal tar in large quantities and is easily isolated from this source in pure condition. It volatilises and sublimes at room temperature above the melting point. The primary use for naphthalene is in the production of phthalic anhydride, also of carbamate insecticides, surface active agents and resins, as a dye intermediate, as a synthetic tanning agent, as a moth repellent, and in miscellaneous organic chemicals. Naphthalene is used in the production of phthalic anhydride; it is also used in mothballs. Naphthalene is also used in the manufacture of phthalic and anthranilic acids to make indigo, indanthrene, and triphenyl methane dyes, for synthetic resins, lubricant, celluloid, lampblack, smokeless powder, and hydronaphthalenes. Naphthalene is also used in dusting powders, lavatory deodorant discs, wood preservatives, fungicide, and as an insecticide. It has been used as an intestinal antiseptic and vermicide and in the treatment of pediculosis and scabies.

Naphthalene is a colorless to brown crystalline solid with a characteristic “moth ball” odor. It evaporates easily and has a strong odor of tar or mothballs. Solubility in water is low (31.7 mg/l at 25 °C), and it is soluble in benzene, alcohol, ether, and acetone (ATSDR, 2005). Shipped as a molten solid.

In 1819, naphthalene was obtained as white crystals during the pyrolysis of coal tar by John Kidd (1775–1851), a British physician and chemist, and Alexander Garden (1757–1829), an American living in Britain. Kidd described the properties of the white crystals he obtained from coal tar and proposed the named naphthaline for the substance; naphthaline was derived from naphtha, a general term for a volatile, fl ammable, hydrocarbon liquid. Michael Faraday (1791–1867) determined the correct empirical formula for naphthalene in 1825, and Richard August Carl Emil Erlenmeyer (1825–1909) proposed the fused benzene ring structure in 1866.

Naphthalene occurs naturally in fossil fuels such as coal and petroleum. It is commonly produced from the distillation and fractionation of coal tar. Naphthalene is used as an intermediate in the production of phthalate plasticizers, other plastics and resins, and other products such as dyes, wood preservatives, explosives, lubricants, pharmaceuticals, deodorizers, and insect repellants. Moth balls and other moth repellants, and some solid block deodorizers used for toilets and diaper pails, are made of crystalline naphthalene (ATSDR, 2005).

Vigorous reactions, sometimes amounting to explosions, can result from the contact between aromatic hydrocarbons, such as Naphthalene, and strong oxidizing agents. They can react exothermically with bases and with diazo compounds. Substitution at the benzene nucleus occurs by halogenation (acid catalyst), nitration, sulfonation, and the Friedel-Crafts reaction. Naphthalene, camphor, glycerol, or turpentine will react violently with chromic anhydride [Haz. Chem. Data 1967. p 68]. Friedel-Crafts acylation of Naphthalene using benzoyl chloride, catalyzed by AlCl3, must be conducted above the melting point of the mixture, or the reaction may be violent [Clar, E. et al., Tetrahedron, 1974, 30, 3296].

Inhalation of naphthalene vapor may causeirritation of the eyes, skin, and respiratorytract, and injury to the cornea. Other symptoms are headache, nausea, confusion, andexcitability. The routes of exposure of thiscompound into the body are inhalation, ingestion, and absorption through the skin; andthe organs that may be affected are the eyes,liver, kidney, blood, skin, and central nervoussystem.
The most severe toxic effects from naphthalene, however, may come from oral intakeof large doses of this compound. In animals, as well as in humans, ingestion of largeamounts may cause acute hemolytic anemiaand hemoglobinuria attributed to its metabolites, 1- and 2-naphthol and naphthoquinones.Infants are more sensitive than adults becauseof their lower capacity for methemoglobinreduction. Other symptoms from ingestion ofnaphthalene are gastrointestinal pain and kidney damage. The LD50 values reported inthe literature show variation among differentspecies. In mice, an oral LD50 value may beon the order of 600 mg/kg. Symptoms of respiratory depression and ataxia were noted.
Chronic exposure to naphthalene vapormay affect the eyes, causing opacities of thelens and optical neuritis. The acute effectsfrom inhalation of its vapors at high concentrations are nausea and vomiting.
Inhalation studies have shown positivetumorigenic response in mice. Studies conducted under National Toxicology Program(NTP) show clear evidence of carcinogenicityin rats resulting from inhalation of naphthalene vapors (NTP 2000). Increased incidencesof respiratory epithelial adenoma and olfactory epithelial neuroblastoma in the nose wereobserved in both the sexes of rats. On thebasis of these findings IARC has reevaluatednaphthalene and reclassified it under Group2B carcinogen, as possibly carcinogenic tohumans (IARC 2002)..

Flammable/combustible material. May be ignited by friction, heat, sparks or flames. Some may burn rapidly with flare burning effect. Powders, dusts, shavings, borings, turnings or cuttings may explode or burn with explosive violence. Substance may be transported in a molten form at a temperature that may be above its flash point. May re-ignite after fire is extinguished.

Human poison by ingestion. Experimental poison by ingestion, intravenous, and intraperitoneal routes. Moderately toxic by subcutaneous route. An experimental teratogen. Experimental reproductive effects. An eye and skin irritant. Can cause nausea, headache, daphoresis, hematuria, fever, anemia, liver damage, vomiting, convulsions, and coma. Poisoning may occur by ingestion of large doses, inhalation, or skin absorption. Questionable carcinogen with experimental tumorigenic data. Flammable when exposed to heat or flame; reacts with oxidizing materials. Explosive reaction with dinitrogen pentaoxide. Reacts violently with CrOs, aluminum chloride + benzoyl chloride. Fires in the benzene scrubbers of coke oven gas plants have been attributed to oxidation of naphthalene. Explosive in the form of vapor or dust when exposed to heat or flame. To fight fire, use water, CO2, dry chemical. When heated to decomposition it emits acrid smoke and irritating fumes.

Naphthalene is used as a chemical intermediate or feedstock for synthesis of phthalic, anthranilic, hydroxyl (naphthols), amino (naphthylamines), and sulfonic compounds; which are used in the manufacture of various dyes and in the preparation of phthalic anhydride, 1-naphthyl-N-methyl carbonate; and β-naphthol. Naphthalene is also used in the manufacture of hydronaphthalenes, synthetic resins; lampblack, smokeless powder; and celluloid. Naphthalene has been used as a moth repellent.
Approximately 100 million people worldwide have G6PD deficiency which would make them more susceptible to hemolytic anemia on exposure to naphthalene. At present, more than 80 variants of this enzyme deficiency have been identified. The incidence of this deficiency is 0.1% in American and European Caucasians, but can range as high as 20% in American blacks and greater than 50% in certain Jewish groups. Newborn infants have a similar sensitivity to the hemolytic effects of naphthalene, even without G6PD deficiency.

Naphthalene is reasonably anticipated to be a human carcinogenbased on sufficient evidence from studies in experimental animals.

Crystallise naphthalene once or more times from the following solvents: EtOH, MeOH, CCl4, *C6H6, glacial acetic acid, acetone or diethyl ether, followed by drying at 60o in an Abderhalden drying apparatus. It has also been purified by vacuum sublimation and by fractional crystallisation from its melt. Other purification procedures include refluxing in EtOH over Raney Ni and chromatography of a CCl4 solution on alumina with *benzene as eluting solvent. Baly and Tuck [J Chem Soc 1902 1908] purified naphthalene for spectroscopy by heating with conc H2SO4 and MnO2, followed by steam distillation (repeating the process), and formation of the picrate which, after recrystallisation (m 150o) is decomposed with base and the naphthalene is steam distilled. It is then crystallised from dilute EtOH. It can be dried over P2O5 under vacuum (take care not to make it sublime). Also purify it by sublimation and subsequent crystallisation from cyclohexane. Alternatively, it has been washed at 85o with 10% NaOH to remove phenols, with 50% NaOH to remove nitriles, with 10% H2SO4 to remove organic bases, and with 0.8g AlCl3 to remove thianaphthalenes and various alkyl derivatives. Then it is treated with 20% H2SO4, 15% Na2CO3 and finally distilled. [Gorman et al. J Am Chem Soc 107 4404 1985.] Zone refining purified naphthalene from anthracene, 2,4-dinitrophenylhydrazine, methyl violet, benzoic acid, methyl red, chrysene, pentacene and indoline. [Beilstein 5 IV 1640.]

Dissolve or mix the material with a combustible solvent and burn in a chemical incinerator equipped with an afterburner and scrubber. All federal, state, and local environmental regulations must be observed. Consult with environmental regulatory agencies for guidance on acceptable disposal practices. Generators of waste containing this contaminant (≥100 kg/mo) must conform with EPA regulations governing storage, transportation, treatment, and waste disposal.