Ethylene oxide (C2H4O) is a kind of cyclic ether with important industrial applications. Although it is highly toxic and dangerous for household application and consumers to use, it can be used for the manufacture of many important industrial and commercialized products as well as some chemicals and intermediates. For example, it is very useful in the production of detergents, thickeners, solvents, plastics, and many kinds of organic chemicals such as ethylene glycol, ethanolamines, simple and complex glycols, polyglycol ethers, and other compounds. It is also a commonly sterilization methods used in the healthcare industry. In addition, it can be used as an accelerator of maturation of tobacco leaves and fungicide, as well as the main component of thermobaric weapons (fuel-air explosives). In industry, it is generally manufactured through direct oxidation of ethylene. In low doses, it can be used as a pesticide and a sterilizing agent owing to its effect of causing DNA damage. However, this property also make it a potential carcinogen. 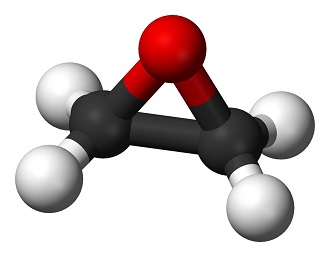 Ethylene oxide is the simplest cyclic ether. It is a colorless gas or liquid and has a sweet, etheric odor. Ethylene oxide is a flammable, very reactive and explosive chemical substance. On decomposition, vapors of pure ethylene oxide mix with air or inert gases and become highly explosive. Ethylene oxide, is used in large scale as an intermediate in the production of monoethylene glycol, diethylene glycol, triethylene glycol, poly(ethylene) glycols, ethylene glycol ethers, ethanolamine, ethoxylation products of fatty alcohols, fatty amines, alkyl phenols, cellulose, and poly(propylene glycol). It is also used as a fumigant for food and cosmetics, and in hospital sterilization of surgical equipment and heat sensitive materials.

Ethylene oxide is widely used as a sterilizingagent; as a fumigant; as a propellant; in theproduction of explosives; in the manufactureof ethylene glycol, polyethylene oxide, gly-col ethers, crown ethers, ethanolamines, andother derivatives; and in organic synthesis.

The major use of ethylene oxide in the United States (accounting for over 99% of production) is as an intermediate in the production of several industrial chemicals (ATSDR 1990, IARC 1994). The remainder is used in the gaseous form, either alone or combined with nitrogen, carbon dioxide, or dichlorofluoromethane as a sterilizing agent, disinfectant, fumigant, or insecticide. The largest use (about 60%) is to produce ethylene glycol (antifreeze). Other chemicals produced from ethylene oxide include non-ionic surfactants (used in industrial applications, detergents, and dishwashing formulations), glycol ethers, ethanolamines (used in soaps, detergents, and textile chemicals), diethylene glycol, triethylene glycol, polyethylene glycol, and urethane polyols. Although a relatively small percentage of ethylene oxide is used as a fumigant or sterilizing agent, these uses involve a variety of facilities, products, and materials, including hospital equipment, medical and dental clinics, research laboratories, foods, furs, clothing, furniture, books, paper, leather, cosmetics, drugs, railroad cars, beehives, and tobacco. Facilities that manufacture sterile disposable medical supplies and medical facilities, including hospitals, medical and dental clinics, and private medical and dental surgeries, account for about 95% of the ethylene oxide used as a fumigant or sterilant. In hospitals, ethylene oxide is used as a gaseous sterilant for heatsensitive medical items, surgical instruments, and other objects and fluids coming in contact with biological tissues. Before 1966, ethylene oxide was used as an intermediate in the production of acrylonitrile.

Fumigant for foodstuffs and textiles; to sterilize surgical instruments; agricultural fungicide. In organic syntheses, especially in the production of ethylene glycol. Starting material for the manufacture of acrylonitrile and nonionic surfactants.

ChEBI: A saturated organic heteromonocyclic parent that is a three-membered heterocycle of two carbon atoms and one oxygen atom.

Ethylene oxide is currently produced by the direct oxidation of ethylene with oxygen or air over a catalyst. Ethylene is approximately 60% converted to the oxide at temperatures in the range of 100–150℃. In the past, an indirect but more general and more specific synthesis path consisted of adding hypochlorous acid to olefins to form the chlorohydrins. Subsequent treatment with strong bases results in dehydrochlorination and the formation of the epoxide.

By catalytic oxidation of ethylene.

Highly flammable. Flammable over a wide vapor-air concentration range. Must be diluted on the order of 24 to 1 with water to lose flammability. Soluble in water.

Ethylene oxide is a severe irritant, as well asa toxic and carcinogenic compound. Inhala-tion can cause severe irritation in the eyes,respiratory tract, and skin. In humans, thedelayed symptoms may be nausea, vomit-ing, headache, dyspnea, pulmonary edema,weakness, and drowsiness. Exposure to highconcentrations can cause central nervous sys-tem depression.
Contact with an aqueous solution of ethy-lene oxide on skin can produce severe burnsafter a delay period of a few hours. It maybe absorbed by plastic, leather, and rubbermaterials if not handled properly, and cancause severe skin irritation.
Exposure of test animals to a high con-centration of ethylene oxide resulted inthe watering of eyes, nasal discharge, and labored breathing. The toxic effects observedafter a few days were vomiting, diarrhea,pulmonary edema, dyspnea, and convulsion,followed by death.
Ethylene oxide is a teratogen, causingbirth defects. Laboratory tests on animalsindicated that exposure could cause fetaldeaths, specific developmental abnormalities,and paternal effects related to testes andsperm ducts.
Ethylene oxide showed positive carcino-genicity in test animals. Inhalation, ingestion,and subcutaneous application over a periodof time developed tumors of all kinds in ratsand mice. It caused brain, liver, gastroin-testinal, and blood cancers in test subjects.Ethylene oxide and 1,2- propylene oxideeach mixed with salad oil induced squamous-cell carcinomas of the forestomach whenadministered intra-gastrically by gavage tofemale Sprague-Dawley rats (Dunkelberg1982). The study was carried out for a periodof 3 years and the first tumor occurred inthe 79th week for both compounds. Nei-ther compound, however, induced tumors atsites away from the point of administration.Experimental studies on rodents indicatedthat subacute exposures to ethylene oxideat a concentration of 1 ppm caused DNAdamage producing the DNA adduct, 7-(2-hydroxyethyl)guanine (Thier and Bolt 2000).Although the evidence of its carcinogenicityin humans is inadequate, it is suspected to becancer causing to humans.
Ethylene oxide is a mutagen in animalsand humans. It causes chromosomal aber-rations (Thiess et al. 1981), errors in DNAsynthesis (Cumming et al. 1981), and alky-lation of hemoglobin (Calleman et al. 1978).
Repeated brief exposures to ethylene oxideat 800 and 1200 ppm caused fetal toxicityindicated by reduced fetal weight in rats(Saillenfait et al. 1996).

Ethylene oxide is an extremely flammable substance (NFPA rating = 4). Ethylene oxide vapor may be ignited by hot surfaces such as hot plates and static electricity discharges, and since the vapor is heavier than air, it may travel a considerable distance to an ignition source and flash back. Ethylene oxide vapor forms explosive mixtures with air at concentrations of 3 to 100% (by volume). Carbon dioxide or dry chemical extinguishers should be used for ethylene oxide fires. Ethylene oxide may explode when heated in a closed vessel.

Fungicide and fumigant: Ethylene oxide is used as a fumigant for spices, seasonings, and foodstuffs and as an agricultural fungicide. When used directly in the gaseous form or in nonexplosive gaseous mixtures with nitrogen or carbon dioxide, ethylene oxide can act as a disinfectant, fumigant, sterilizing agent, and insecticide. It is a man-made chemical used as an intermediate in organic synthesis for ethylene glycol, polyglycols, glycol ethers, esters, ethanolamines, acrylonitrile, plastics, and surface-active agents. It is also used as a fumigant for textiles and for sterilization, especially for surgical instruments. It is used in drug synthesis and as a pesticide intermediate. Not approved for use in EU countries. Actively registered in the U.S.

Ethylene oxide is a very strong irritant widely used in the chemical industry, and as a sterilizer of medical supplies, pharmaceutical products, and food. It can produce immediate (urticaria, asthma, anaphylaxis) or delayed reactions (irritant rather than allergic contact dermatitis). For example, residues in masks or dressings can produce irritant contact dermatitis.In delayed contact allergy, it seems that cross-reaction can be observed to epichlorhydrin or epoxypropane

Steel and stainless steel are suitable materials for equipment and piping in ethylene oxide service. Dangerous runaway reactions can result from contact with copper, silver, magnesium and their alloys; mercury and its salts; oxidizers of all types; alkalis and acids; alcohols; mercaptans; and alkali metals. Ethylene oxide will polymerize violently if contaminated with aqueous alkalis, amines, mineral acids, metal chlorides, or metal oxides.

Ethylene oxide is a man-made chemical used in the production of glycols (ethylene glycol, polyglycols, glycol ethers, esters), nontonic surface-active agent; ethanolamines, acrylonitrile, plastics. It is also used as a fumigant for foodstuffs and textiles; an agricultural fungicide; and for sterilization, especially for surgical instruments. It is used in drug synthesis and as a pesticide intermediate

UN1040 Ethylene oxide or Ethylene oxide with nitrogen up to a total pressure of 1 MPa (10 bar) at 50℃, Hazard Class: 2.3; Labels: 2.3-Poisonous gas, 2.1- Flammable gas, Inhalation Hazard Zone D. Cylinders must be transported in a secure upright position, in a wellventilated truck. Protect cylinder and labels from physical damage. The owner of the compressed gas cylinder is the only entity allowed by federal law (49CFR) to transport and refill them. It is a violation of transportation regulations to refill compressed gas cylinders without the express written permission of the owner

Dry oxirane with CaSO4, then distil it from crushed NaOH. It has also been purified by passage, as a gas, through towers containing solid NaOH. [Beilstein 17/1 V 3.]

May form explosive mixture with air. Chemically unstable. Dangerously reactive; may rearrange chemically and/or polymerize violently with evolution of heat; when in contact with highly active catalytic surfaces, such as anhydrous chlorides of iron, tin and aluminum; pure oxides of iron and aluminum; and alkali metal hydroxides. Even small amounts of strong acids; alkalis, or oxidizers can cause a reaction. Avoid contact with copper. Protect container from physical damage, sun and heat. Attacks some plastics, rubber or coatings.

Ethylene oxide is dangerously explosive under fi re condition; it is flammable over an extremely large range of concentrations in air and burns in the absence of oxygen.

Ethylene oxide is sold only in grades of 99.7 percent or higher purity.
Ranges in specification values indicate a difference in the limits given by different producers [2].