Chlorpyrifos is a kind of crystalline organophosphate insecticide, acaricide and miticide used primarily for the control of foliage and soil-borne insect pests in many kinds of food and feed crops. Chlorpyrifos is widely used around the world to control pest insects in agricultural, residential and commercial settings. Its largest usage amount is consumed in corn. It can also be used on other crops or vegetables including soybeans, fruit and nut trees, cranberries, broccoli, and cauliflower. The non-agricultural applications include golf courses, turf, green houses, and no-structural wood treatment. It can also be used as a mosquito adulticide, and used in roach and anti bait stations in child resistant packaging. Its mechanism of action is through suppressing the nervous system of insects via inhibiting acetylcholinesterase. 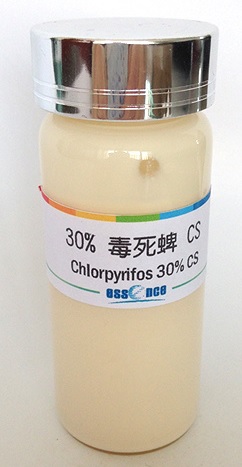 Chlorpyrifos (diethyl 3,5,6-trichloro-2-pyridyl phosphorothionate) is a white crystal-like solid with a strong odor. It does not mix well with water, so it is usually mixed with oily liquids before it is applied to crops or animals (ATSDR, 1997).

Chlorpyrifos is a broad-spectrum organophosphate insecticide sold under the trade names of Dursban, Empire 20, Equity, and Whitmire PT 270. First registered in 1965 to control foliage- and soil-borne insect pests on a variety of food and feed crops, it is one of the most widely used and one of the major insecticides used residentially (U.S. EPA, 2000).

Chlorpyrifos belongs to the class of insecticides known as organophosphates. Technical chlorpyrifos is an amber to white crystalline solid with a mild sulfur odor. It is insoluble in water, but soluble in benzene, acetone, chloroform, carbon disulfi de, diethyl ether, xylene, methylene chloride, and methanol. Formulations of chlorpyrifos include emulsifi able concentrate, dust, granular wettable powder, microcapsule, pellet, and sprays. Chlorpyrifos is widely used as an active ingredient in many commercial insecticides, such as Dursban and Lorsban, to control household pests, mosquitoes, and pests. Formulations of chlorpyrifos include emulsifi able concentrates, granules, wettable powders, dust, microcapsules, pellets, and sprays. The US EPA has classifi ed chlorpyrifos as a GUP

Chlorpyrifos belongs to a class of insecticides known as organophosphates. Technical chlorpyrifos is amber to white crystalline solid with a mild sulphur odour. Formulations of chlorpyrifos include emulsifiable concentrate, dust, granular wettable powder, microcapsule, pellet, and sprays. Chlorpyrifos is widely used as an active ingredient in many commercial insecticides such as Dursban and Lorsban to control household pests, mosquitoes, and pests in animal houses. The U.S. EPA classified chlorpyrifos as GUP.

Chlorpyrifos is an organophosphorus insecticide used to control insects on a wide variety of crops including fruits, vegetables, ornamentals and forestry

ChEBI: An organic thiophosphate that is O,O-diethyl hydrogen phosphorothioate in which the hydrogen of the hydroxy group has been replaced by a 3,5,6-trichloropyridin-2-yl group.

Insoluble in water. Chlorpyrifos reacts with water and most reactive hydrogen compounds. The rate of hydrolysis in water increases with pH, with temperature and with the presence of copper and possibly other metals that can form chelates.

Exposures to chlorpyrifos cause adverse health effects and poisoning. The symptoms include, but are not limited to, headache, dizziness, respiratory problems, muscular and joint pains, numbness, tingling sensations, incoordination, tremor, nausea, abdominal cramps, vomiting, sweating, blurred vision, respiratory depression, slow heart beat, nervousness, weakness, cramps, diarrhea, chest pain, pin-point pupils, tearing, salivation, clear nasal discharge and sputum, muscle twitching, and in severe poisonings convulsions, coma, and death. Exposures to chlorpyrifos cause adverse effects to the nervous system. The effects include phosphorylation of the active site, disturbance in the activity of the acetylcholinesterase (AChE) enzyme (inactivity). AChE enzyme is necessary to stop the transmission of the chemical neurotransmitter. In occupational workers, high concentrations of chlorpyrifos cause poisoning with symptoms of unconsciousness, convulsions and/or fatal injury. Persons with respiratory ailments and disturbed liver function are known to be at increased health risk. Also, repeated exposures to chlorpyrifos have been reported to cause disturbances in the process of brain development.

Combustible material: may burn but does not ignite readily. Containers may explode when heated. Runoff may pollute waterways. Substance may be transported in a molten form.

Insecticide, Nematicide: A U.S. EPA restricted Use Pesticide (RUP). Chlorpyrifos is one of the most widely used insecticides in the U.S., both around the home and in agriculture. A broad-spectrum insecticide, originally used primarily to kill mosquitoes but no longer registered for that use. Chlorpyrifos is effective in controlling cutworms, corn rootworms, cockroaches, grubs, flea beetles, flies, termites, fire ants, and lice. It is used as an insecticide on grain, cotton, field, fruit, nut and vegetable crops, as well as on lawns and ornamental plants. It is also registered for direct use on sheep and turkeys, for horse site treatment, dog kennels, domestic dwellings, farm buildings, storage bins, and commercial establishments. Chlorpyrifos acts on pests primarily as a contact poison, with some action as a stomach poison. It is available as granules, wettable powder, dustable powder and emulsifiable concentrate. Top crop uses in California include cotton, alfalfa, almonds, and oranges.

A potential danger to those involved in the manufacture, formulation, and application of this insecticide.

Some recent studies have reported associations between chlorpyrifos exposure and increased risk for cancer for farm workers participating in the Agricultural Health Study. Specifically, increased risk for glioma and rectal cancer has been associated with chlorpyrifos exposure . Chlorpyrifos was also one pesticide associated with trends toward higher incidence of lung cancer through 2001 . For all cancers though, follow- up periods are short and exposures are based on recall so results may be unreliable.

The metaboic fate of chlorpyrifos in soil, plants and animals is similar, with oxidative dealkylation or hydrolysis to diethyl phosphorothioate and 3,5,6-trichloro-2-pyridinol being the major route of detoxification. The latter metabolite is conjugated as the glycosides or glucuronides in plants and animals. De-ethylation is not a major route of detoxification in mammals. Activation by desulfuration to the active acetylcholinesterase inhibitor, chlorpyrifos oxon, occurs in both animals and plants but the compound is often not detected owing to its rapid rate of hydrolysis. Dechlorination of the chloropyridine ring also occurs in the environment, principally by photolysis.

Chlorpyrifos is hydrolysed in acid, neutral and alkaline solution (PM). In neutral solution (approximately pH 7 and 25 °C) the DT50 for decomposition was variously reported as between 29 and 72 days. DT50s in buffered solutions at pH 4.7,6.9 and 8.1 were reported as being 62.7,35.3 and 22.9 days respectively (Racke, 1993). Hydrolysis is much faster in alkaline solutions and the DT50 at pH 11 was reported as 0.5 day (Macalady and Wolfe, 1983). The mechanisms of hydrolysis and nature of the products are pH-dependent. As has been found with many organophosphates, O-dealkylation predominates at acid and neutral pH values and in alkaline solution the main mechanism is cleavage of the P-O-aryl bond. Macalady and Wolfe (1983) showed that in buffered aqueous polar solvent mixtures at pH 9.7 to 12.9 the only products were 3,5,6-trichloro- 2-pyridinol(2) and diethyl phosphorothioate (3). In near neutral solution (pH 7.68) the main products were desethylchlorpyrifos (4) and ethanol with lesser amounts of 2 and 3. The mechanism for base-catalysed hydrolysis is via SN2 hydroxide attack on phosphorus, whereas under acid and neutral conditions the nucleophile is water and the rate is pH-independent with a half-life of 72.1 days and 72.9 days being reported at pH 5 and 7 respectively. Chlorpyrifos oxon (10, Scheme 2) was much more easily hydrolysed (Kenaga, 1971). Pathways for the hydrolytic degradation of chlorpyrifos in acid and base solution are shown in Scheme 1.

Above 130°C this chemical may undergo violent exothermic decomposition. The substance decomposes on heating at approximately 160°C and on burning, producing toxic and corrosive fumes including hydrogen chloride, nitrogen oxides; phosphorous oxides, sulfur oxides. Reacts with strong acids; strong bases; causing hydrolysis. Attacks copper and brass. Contact with oxidizers may cause the release of phosphorous oxides. Contact with strong reducing agents, such as hydrides, may cause the formation of flammable and toxic phosphine gas.

This compound is 50% hydrolyzed in aqueous MeOH solution at pH 6 in 1930 days; and in 7.2 days at pH 9.96. Spray mixtures of <1% concentration are destroyed with an excess of 5.25% sodium hypochlorite in <30 minutes @ 100°C; and in 24 hours @ 30°C. Concentrated (61.5%) mixtures are essentially destroyed by treatment with 100:1 volumes of the above sodium hypochlorite solution and steam in 10 minutes. In accordance with 40CFR165, follow recommendations for the disposal of pesticides and pesticide containers. Must be disposed properly by following package label directions or by contacting your local or federal environmental control agency, or by contacting your regional EPA office.