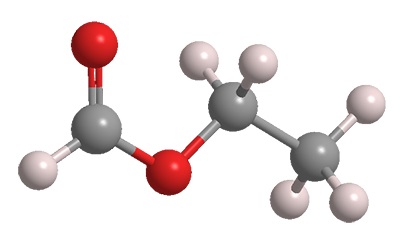 Ethyl Formate occurs widely in fruits. It is a liquid with a slightly pungent, fruity, ethereal odor and is used in fruit flavors.

Ethyl formate has a characteristic, pungent odor similar to ethyl acetate and reminiscent of pineapple and a slightly bitter taste. It has been also reported to have a rum-like odor. The ester is slightly soluble in water (9 parts/100 at 18 °C) with gradual decomposition into formic acid and ethanol; it is miscible in ethanol, ether, and acetone (HSDB, 2013), as well as in benzene.

Colorless, clear liquid with a pleasant, fruity odor. An odor threshold concentration of 2.7 ppmv was reported by Nagata and Takeuchi (1990).

Astronomers have identified ethyl formate in dust clouds in an area of the Milky Way galaxy called Sagittarius B2. The astronomers, from the Max Planck Institute for Radio Astronomy in Bonn, Germany, used the 30 meter IRAM radio telescope in Spain to analyze the spectra of radiation emitted from hot regions near a new star. It is among 50 molecules identified by the astronomers.

As flavor for lemonades and essences; for manufacture of artificial rum and arrack; also as a solvent for nitrocellulose; as fungicide and larvicide for tobacco, cereals, dried fruits, etc.; in organic synthesis.

Plant volatiles such as ethyl formate have been shown to have insecticidal properties as fumigant. The efficacy of ethyl formate against insect pests of food commodities, bagged cereals, spices, pulses, dry fruits and oilcakes had been proved. The fumigant was known to provide a high mortality of mixed stage cultures of the key stored product pests, with limited efficacy against the pupal stage of few pests like S. oryzae. The advantages of ethyl formate include natural occurrence in food; rapid kill of insects (2-4 hours); fast breakdown of residues to natural products and low human toxicity. However the fumigant exhibits poor penetration characteristics and high doses (>120 g/t of grain) were required to control internal feeders, which was higher than the flammable limit of 85 g/t. Formulations of ethyl formate in liquid carbon dioxide were found to overcome the problems of flammability and poor penetration.

Ethyl Formate is a flavoring agent that occurs naturally in some plant oils, fruits, and juices but does not occur naturally in the ani- mal kingdom. it is used in food at a maximum level, as served, of 0.05% in baked goods; 0.04% in chewing gum, hard candy, and soft candy; 0.02% in frozen dairy desserts; 0.03% in gelatins, puddings, and fillings; and 0.01% in all other food categories. it is an ester of formic acid and is prepared by esterification of formic acid with ethyl alcohol or by distillation of ethyl acetate and formic acid in the presence of concentrated sulfuric acid.

Ethyl formate is used as a solvent; as aflavor for lemonades and essences; and as afungicide and larvicide for cereals, dry fruits,tobacco, and so on.

ChEBI: A formate ester resulting from the formal condensation of formic acid with ethanol.

Ethyl formate is an ester. Esters react with acids to liberate heat along with alcohols and acids. Strong oxidizing acids may cause a vigorous reaction that is sufficiently exothermic to ignite the reaction products. Heat is also generated by the interaction of esters with caustic solutions. Flammable hydrogen is generated by mixing esters with alkali metals and hydrides. Ethyl formate is incompatible with the following: Nitrates; strong oxidizers, alkalis & acids [Note: Decomposes slowly in water to form ethyl alcohol and formic acid.] .

Narcotic and irritant to skin and eyes; use in foods restricted to 0.0015%. Highly flammable, dangerous fire and explosion risk. Questionable carcinogen.

The irritant action of ethyl formate inthe eyes, nose, and mucous membranes ismilder than that of methyl formate. How ever it is more narcotic than the methylester. Cats exposed to 10,000 ppm died after90 minutes, after deep narcosis. A 4-hourexposure to 8000 ppm was lethal to rats.Inhalation of 5000 ppm for a short periodproduces eye and nasal irritation and salivation in rats. The toxic effects from ingestion include somnolence, narcosis, gastritis,and dyspnea. The oral LD50 values in various test animals range between 1000 and2000 mg/kg.

Behavior in Fire: Vapor is heavier than air and may travel long distance to a source of ignition and flash back.

Fumigant, Insecticide: Used as a fumigant, especially on dried fruit, Also used as a solvent for cellulose nitrate and acetate and in the production of synthetic flavors. Not currently registered for agricultural use in EU countries and the U.S. Used in Australia and there are 63 global suppliers.

Ethyl methanoate is generally recognized as safe by the U.S. Food and Drug Administration.
According to the U.S Occupational Safety and Health Administration (OSHA), ethyl formate can irritate eyes, skin, mucous membranes, and the respiratory system of humans and other animals; it is also a central nervous system depressant.In industry, it is used as a solvent for cellulose nitrate, cellulose acetate, oils, and greases. It can be used as a substitute for acetone; workers may also be exposed to it under the following circumstances:
during spray, brush, or dip applications of lacquers
during the manufacture of safety glass
When fumigating tobacco, cereals, and dried fruits (as an alternative to methyl bromide under the U.S. Department of Agriculture quarantine system ).

This material is used as an emulsifier; food and feed additive; flavor, packaging material; as a solvent for cellulose nitrate and acetate; it is used as a fumigant and in the production of synthetic flavors. It is also a raw material in pharmaceutical manufacture

Free acid or alcohol is removed by standing the ester over anhydrous K2CO3, with occasional shaking, then decanting and distilling from P2O5. Alternatively, the ester can be kept over CaH2 for several days, then distilled from fresh CaH2. It cannot be dried with CaCl2 because it reacts rapidly with the ester to form a crystalline compound. [Beilstein 2 IV 23.]

May form explosive mixture with air. Reacts violently with nitrates, strong oxidizers, strong alkalis, and strong acids. Decomposes slowly in water, forming ethyl alcohol and formic acid. May accumulate static electrical charges, and may cause ignition of its vapors

Spray into a furnace in admixture with a flammable solvent