Sodium thiosulfate is a commonly used chemical material, as the fixing agent in photography, film and printing plate-making industry, as a reducing agent used in tanning. It is used as a bleaching agent for removing residual and a mordant in the paper and textile industries, as antidotes of cyanide poisoning in medicine, as dechlorination agent and fungicides of drinking water and wastewater in water treatment, as a copper corrosion inhibitor of circulating cooling water and a deoxidizer of boiler water systems. It is also used for Cyanide wastewater treatment. Soda ash and sulfur are generally used as raw materials in industry, soda ash reacts with sulfur dioxide produced by the combustion of sulfur to produce sodium sulfite, then add sulfur for boiling reactions, and then filter, bleach, concentrate and crystallize, etc, can obtain sodium thiosulfate pentahydrate. Other production waste containing sodium sulfide, sodium sulfite, sulfur and sodium hydroxide can also be used, after appropriate treatment to get the product. 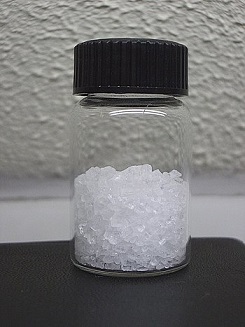 The above information is edited by Yan Yanyong of Chemicalbook.

Sodium thiosulfate has two forms as anhydrous sodium thiosulfate (Na2S2O3) and sodium thiosulfate pentahydrate (Na2S2O3 · 5H2O), the latter is also known as soda and Hyperion. A molecular weight is 158.11 and 248.18 respectively. Anhydrous sodium thiosulfate is an opaque crystalline powder. The relative density is 1.667. It is odorless, salty taste, soluble in water, insoluble in ethanol. It decomposes in acidic solution, has a strong reduction, easily absorbs moisture. Sodium thiosulfate pentahydrate is odorless, colorless and transparent monoclinic crystals or granules. The relative density is 1.685. The melting point is 48 ℃. It loses all crystal water at 100 ℃, and decomposes above 100 ℃. It is easily weathered in dry and hot air, slightly deliquescence in the hot and humid air. It is soluble in water and turpentine, insoluble in ethanol, decomposes in case of strong acid. Prolonged exposure in the air, it is easily oxidated and carbonized by oxygen and carbon dioxide.

It is colorless monoclinic crystal or white crystalline powder, Odorless, salty ignorant. The relative density is 1.667. Soluble in water, the solubility is 231 g/100 ml of water at 100 ℃. Insoluble in alcohol. deliquescence easily in air. With a strong reductibility, decomposition in acidic solution.

With reductibility, sodium thiosulfate is a medium strength reducing agent, for example, can be oxidated by chlorine:
Na2S2O3 + 4Cl2 + 5H2O = Na2SO4 + H2SO4 + 8HCl
this reaction is used in textile and paper industries, and sodium thiosulfate is used as dechlorination agent. Again, it can be oxidized to sodium tetrathionate by iodine:
Na2S2O3 + I2 = Na2S4O6 + 2Nal
this reaction is used in analytical chemistry for quantitative determination of iodine.
It is also used in tanning, extracts silver from the ore and so on. Since there are different oxidation states of sulfur in sodium thiosulfate molecule, it is stable in alkaline medium, unstable an acidic medium, oxidation-reduction reaction occurs when acidification, separate out sulfur:
Na2S2O3 + H2SO4 = Na2SO4 + H2S2O3 H2S2O3 = H2SO3 + S H2SO3 = H2O + S02.
With coordination, thiosulfate ions can form stable complexes with certain metal ions, for example, silver bromide can be dissolved in an aqueous solution of hypo to produce stable [Ag (S2O3) 2] 3-complex ions:
AgBr + 2Na2S2O3 = Na3 [Ag (S2O3) 2] + NaBr, so it is commonly used as a photographic fixing bath. Sodium sulfite and sulfur are boiled, and then filtration, evaporation, crystallization to prepare sodium thiosulfate.

1. Sodium thiosulfate is Used in manufacture of the fixing powder and preparation of the photographic industry fixer, desiccant. Used as a reducing agent of dichromate in leather tanning industry.
2. Sodium thiosulfate is an important inorganic chemical raw material. It can be used in the synthesis of pesticides Bisultap, Thiosultap disodium, CARTAP and so on.
3. Used as analytical reagents, mordant and fixer.
4. Used as new insecticides, with stomach poisoning, uptake and contact action effects, it can prevent and treat rice yellow stem borer, stem borer, leaf roller, rice thrips and vegetables, fruit pests.
5. With uptake and strong contact, stomach poisoning effects, it can prevent and treat various rice pests and vegetables, fruit pests.
6. Used as the chlorine removal agent for Pulp and cotton fabric bleached, as chelating agents, anti-oxidants in the food industry, as detergents, disinfectants in the pharmaceutical industry.
7. Used as chelating agents, antioxidants, anti-browning agent, as the dechlorination agent of chlortetracycline hydrochloride (or chlortetracycline) chilled with ice, dechlorination reaction is as follows:
More chlorine content will cause side reactions of free sulfur, so only used for very dilute concentrations of chlorine.
Used as salt chelating agent, limited content is 0.1% or less.

Sodium thiosulfate, Na2S203·5H20, also known as sodium hyposulfite, hypo,andsodium subsulfite, is a white crystalline solid that has a melting point of 48 °C(118 °F). Water soluble,it is used as a fixing agent for photographic films, plates, and papers. Sodium thiosulfate is used in medicine, as a germicide, in manufacturing leather, as a mordant in dyeing, and for extracting silver from ore.

Sodium thiosulfate is a common analytical reagent used in iodometric titration to analyze chlorine, bromine, and sulfide. Other uses are in bleaching paper pulp, bleaching straw, ivory, and bones, for removing chlorine from solutions, silver extraction from its ores, a mordant in dyeing and printing textiles, and as an antidote to cyanide poisoning.
Another major application is in photography, where it is used as a fixer to dissolve unchanged silver salts from exposed negatives.
Sodium Thiosulfate is used primarily as a medicament against cyanide poisoning, able to convert cyanide into thiocyanate, a reaction which is catalyzed by the enzyme Rhodanese. Antioxidant.

Sodium Thiosulfate is a sequestrant, antioxidant, and formulation aid that is a powder soluble in water. it can be used in alcoholic bev- erages at 5 ppm and in table salt at 0.1%. it is also termed sodium hyposulfite.

Sodium thiosulfate (thiosulfate) Known simply as “hypo,” an abbreviated form of the incorrect form hyposulfite, this white crystal was made by boiling calcium thiosulfate with sodium sulfate. It is soluble in water and oil of turpentine but not in alcohol. The property of sodium thiosulfate to dissolve silver halides was discovered in 1819 by Sir John Herschel and was probably first used to fix photographic images by L. J. M. Daguerre. After Daguerre published its use in his 1839 manual W. H. F. Talbot finally used it to fix calotype negatives and silver chloride prints, although he continued to stabilize them with potassium iodide and sodium chloride presumably for the variety of colors possible. Sodium thiosulfate was the primary fixing agent throughout the 19th century and is still used today.

ChEBI: An inorganic sodium salt composed of sodium and thiosulfate ions in a 2:1 ratio.