Formic acid (HCO2H), also called methanoic acid, is the simplest carboxylic acid. Formic acid was first isolated by the distillation of ant bodies and was named after the Latin formica, meaning “ant.” Its proper IUPAC name is now methanoic acid. Industrially, formic acid is produced by treatment of carbon monoxide with an alcohol such as methanol (methyl alcohol) in the presence of a catalyst.
Formic acid is found both naturally occurring and frequently synthesized in laboratories. It is most naturally found in the stings and bites of many insects, including bees and ants, as a chemical defense mechanism. 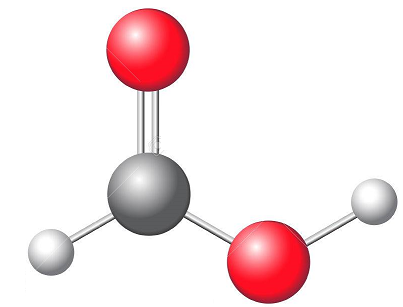 FORMIC ACID is a colorless liquid with a pungent odor. It is a stable corrosive, combustible, and hygroscopic chemical substance. It is incompatible with H2SO4, strong caustics, furfuryl alcohol, hydrogen peroxide, strong oxidisers, and bases and reacts with strong explosion on contact with oxidising agents.
Due to the −CHO group, Formic acid imparts some of the character of an aldehyde. It can form salt and ester; can react with amine to form amide and to form ester by addition reaction with unsaturated hydrocarbon addition. It can reduce the silver ammonia solution to produce a silver mirror, and make the potassium permanganate solution fade, which can be used for the qualitative identification of formic acid.
As a carboxylic acid, formic acid shares most of the same chemical properties in reacting with alkalis to form water soluble formate. But formic acid is not a typical carboxylic acid as it can react with alkenes to form formate esters.

Formic acid, or methanoic acid, is the first member of the homologous series identified as fatty acids with the general formula RCOOH. Formic acid was obtained first from the red ant; itscommon name is derived from the family name for ants, Formi- cidae. This substance also occurs naturally in bees and wasps, and is presumed to be responsible for the "sting" of these insects.
Formic acid has a pungent, penetrating odor. It may be synthesized from anhydrous sodium formate and concentrated H2S04 at low temperature followed by distillation.

Formic acid has a pungent, penetrating odor Formic acid is the frst member of the homologous series identifed as fatty acids with general formula RCOOH This acid was obtained frst from the red ants; its common name is derived from the family name for ants, Formicidae This substance also occurs naturally in bees and wasps and is presumed to be responsible for the sting of these insects.

Formic acid is taken from the Latin word forant, formica. Naturalists had observed the acrid vapor from ant hills for hundreds of years. One of the earliest descriptions of formic acid was reported in an extract of a letter written from John Wray (1627–1705) to the publisher of Philosophical Transactions published in 1670. Wray’s letter reported on “uncommon Observations and Experiments made with an Acid Juyce to be Found in Ants” and noted the acid was previously obtained by Samuel Fisher from the dry distillation of wood ants. Formic acid is found in stinging insects, plants, unripe fruit, foods, and muscle tissue. J?ns Jacob Berzelius (1779–1848) characterized formic acid in the early 19th century, and it wasfirst synthesized from hydrocyanic acid by Joseph Louis Gay-Lussac (1778–1850) at about the same time. A number of synthetic preparations of formic acid were found in the first half of the 19th century. Marcellin Berthelot (1827–1907) discovered a popular synthesis using oxalic acid and glycerin in 1856; he and several other chemists from his period found syntheses of formic acid by heating carbon monoxide in alkaline solutions.

Formic acid has a number of commercial uses. It is used in the leather industry to degreaseand remove hair from hides and as an ingredient in tanning formulations. It is used as alatex coagulant in natural rubber production. Formic acid and its formulations are used aspreservatives of silage. It is especially valued in Europe where laws require the use of naturalantibacterial agents rather than synthetic antibiotics. Silage is fermented grass and crops thatare stored in silos and used for winter feed. Silage is produced during anaerobic fermentationwhen bacteria produce acids that lower the pH, preventing further bacterial action. Acetic acidand lactic acid are the desired acids during silage fermentation. Formic acid is used in silageprocessing to reduce undesirable bacteria and mold growth. Formic acid reduces Clostridiabacteria that would produce butyric acid causing spoilage. In addition to preventing silagespoilage, formic acid helps preserve protein content, improves compaction, and preservessugar content. Formic acid is used as a miticide by beekeepers.

Formic Acid is a flavoring substance that is liquid and colorless, and possesses a pungent odor. it is miscible in water, alcohol, ether, and glycerin, and is obtained by chemical synthesis or oxidation of methanol or formaldehyde.

Formic acid occurs in the stings of ants andbees. It is used in the manufacture of estersand salts, dyeing and finishing of textiles andpapers, electroplating, treatment of leather,and coagulating rubber latex, and also as areducing agent.

Formic acid is manufactured as a by-product of the liquidphase oxidation of hydrocarbons to acetic acid. It is also produced by (a) treating sodium formate and sodium acid formate with sulfuric acid at low temperatures followed by distillation or (b) direct synthesis from water and CO2 under pressure and in the presence of catalysts.

ChEBI: The simplest carboxylic acid, containing a single carbon. Occurs naturally in various sources including the venom of bee and ant stings, and is a useful organic synthetic reagent. Principally used as a preservative and antibacterial agent in livestock feed Induces severe metabolic acidosis and ocular injury in human subjects.

Formic acid is generally produced by chemical synthesis . However, biotechnological routes are described in literature. First, formic acid could be produced from hydrogen and bicarbonate by whole-cell catalysis using a methanogen. Concentrations up to 1.02 mol.L-1 (47 g.L-1) have been reached within 50 h. Another example is the formation of formic acid and ethanol as co-products by microbial fermentation of glycerol with genetically modified organisms. In small-scale experiments, 10 g.L-1 glycerol has been converted to 4.8 g.L-1 formate with a volumetric productivity of 3.18 mmol.L-1.h-1 and a yield of 0.92 mol formate per mole glycerol using an engineered E. coli strain.

Taste characteristics at 30 ppm: acidic, sour and astringent with a fruity depth.

Fumes in air. Soluble in water with release of heat.

Formic acid reacts exothmerically with all bases, both organic (for example, the amines) and inorganic. Reacts with active metals to form gaseous hydrogen and a metal salt. Reacts with cyanide salts to generate gaseous hydrogen cyanide. Reacts with diazo compounds, dithiocarbamates, isocyanates, mercaptans, nitrides, and sulfides to generate flammable or toxic gases. Reacts with sulfites, nitrites, thiosulfates (to give H2S and SO3), dithionites (SO2), to generate flammable and/or toxic gases and heat. Reacts with carbonates and bicarbonates to generate carbon dioxide but still heat. Can be oxidized by strong oxidizing agents and reduced by strong reducing agents. These reactions generate heat. May initiate polymerization reactions or catalyze other chemical reactions. A mixture with furfuryl alcohol exploded [Chem. Eng. News 18:72(1940)].

Corrosive to skin and tissue.

Formic acid is a low to moderately toxicbut highly caustic compound. It is corrosiveto the skin, and contact with pure liquidcan cause burns on the skin and eyes. It ismore toxic than acetic acid. Formic acid isa metabolite of methanol responsible for thelatter’s toxicity. Thus, the acute acidosis ofmethanol is due to the in vivo formation offormic acid generated by the actionof enzymes, alcohol dehydrogenase, andaldehyde dehydrogenase. Ingestion of formicacid can cause death. Long-term exposure toformic acid can cause kidney damage. Greenet al. (2003) have found increased excretionof formic acid and the development of kidneytoxicity in rats following chronic dosingwith trichloroethanol and trichloroethylene.Such induced nephrotoxicity was attributedto excretion and acidosis from formic acid.
Exposure to formic acid vapors may produce irritation of the eyes, skin, and mucousmembranes, causing respiratory distress.
LD50 value, oral (mice): 700 mg/kg
LC50 value, inhalation (mice): 6200 mg/m3/15 minutes
Liesivuori and Savolainen (1991) studiedthe biochemical mechanisms of toxicityof methanol and formic acid. Formicacid is an inhibitor of the enzymemitochondrial cytochrome oxidase causinghistotoxic hypoxia. It is, however, a weakerinhibitor than cyanide and hydrosulfideanions. The effects of its acidosis are dilationof cerebral vessels, facilitation of the entryof calcium ions into cells, loss of lysosomallatency, and deranged production of ATP, thelatter affecting calcium reabsorption in thekidney tubules. Also, urinary acidificationfrom formic acid and its excretion maycause continuous recycling of the acid bythe tubular cell Cl-/formate exchanger. Suchsequence of events probably causes anaccumulation of formate in urine. Other thanmethanol, methyl ethers, esters, and amidesalso metabolize forming formic acid
Chan et al. (1995) have reported a caseof systemic toxicity developed in a 3-yearold girl burned by formic acid over 35% of her total body surface area. The metabolicacidosis in this case was profound with theserum formate level reaching at 400 μg/mL,the highest reported in the literature forpoisoning by any route. The patient wassuccessfully treated with hemodialysis, IVbicarbonate, and supportive measures.
In a study on the poisoning effect ofmethanol and its toxic metabolite formicacid on the retinal photoreceptors and theretinal pigment epithelian cells Treichel et al.(2004) found that the cytotoxic effects weregreater in the retinal photoreceptors althoughboth the cell types accumulated similar levelsof formate when their cultured cell lineswere exposed to formic acid in vitro. Formicacid treatment in both cell types produceddecreases in glutathione and glutathioneperoxidase.

Formic acid is a strong reducing agent and is used as a decalcifier. It is used in pharmaceuticals; in dyeing textiles and finishing color-fast wool; electroplat ing, coagulating latex rubber; regeneration old rubber, and dehairing, plumping, and tanning leather. It is also used in the manufacture of acetic acid, airplane dope; allyl alcohol; cellulose formate; phenolic resins; and oxalate; and it is used in the laundry, textile, insecticide, refrigeration, and paper industries; as well as in drug manufacture.

Biological. Near Wilmington, NC, organic wastes containing formic acid (representing 11.4% of total dissolved organic carbon) were injected into an aquifer containing saline water to a depth of about 1,000 feet. The generation of gaseous components (hydrogen, nitrogen, hydrogen sulfide, carbon dioxide, and methane) suggested that formic acid and possibly other waste constituents were anaerobically degraded by microorganisms (Leenheer et al., 1976).
Heukelekian and Rand (1955) reported a 5-d BOD value of 0.20 g/g which is 57.1% of the ThOD value of 0.83 g/g.
Photolytic. Experimentally determined rate constants for the reaction of formic acid with OH radicals in the atmosphere and aqueous solution were 3.7 x 10-13 and 2.2 x 10-13 cm3/molecule? sec, respectively (Dagaut et al., 1988).
Chemical/Physical. Slowly decomposes to carbon monoxide and water. At 20 °C, 0.06 g of water would form in 1 yr by 122 g formic acid. At standard temperature and pressure, this amount of formic acid would produce carbon monoxide at a rate of 0.15 mL/h. The rate of decomposition decreases with time because the water produced acts as a negative catalyst (Barham and Clark, 1951).
Slowly reacts with alcohols and anhydrides forming formate esters.
At an influent concentration of 1.00 g/L, treatment with GAC resulted in an effluent concentration of 765 mg/L. The adsorbability of the GAC used was 47 mg/g carbon (Guisti et al., 1974).

Anhydrous formic acid can be obtained by direct fractional distillation under reduced pressure, the receiver being cooled in ice-water. The use of P2O5 or CaCl2 as dehydrating agents is unsatisfactory. Reagent grade 88% formic acid can be satisfactorily dried by refluxing with phthalic anhydride for 6hours and then distilling it. Alternatively, if it is left in contact with freshly prepared anhydrous CuSO4 for several days about one half of the water is removed from 88% formic acid; distillation then removes the remainder. Boric anhydride (prepared by melting boric acid in an oven at a high temperature, cooling in a desiccator, and powdering) is a suitable dehydrating agent for 98% formic acid; after prolonged stirring with the anhydride the formic acid is distilled under vacuum. Formic acid can be further purified by fractional crystallisation using partial freezing. [Beilstein 2 IV 3.]