Trifluoroacetic acid (TFA, molecular formula: CF3COOH) is a kind of colorless, volatile and fuming liquid with a similar odor as acetic acid. It is hygroscopic and has irritating odor. It has strong acidic property due to being affected by the electron-attracting trifluoromethyl group with its acidicity being 100000 higher than acetic acid. It has a melting point being-15.2 ℃, boiling point being 72.4 ℃, and the density being 1.5351g/cm3 (1℃). It is miscible with water, fluorinated hydrocarbons, methanol, ethanol, ethyl ether, acetone, benzene, carbon tetrachloride, and hexane; it is partially soluble in carbon disulfide and alkane containing more than six carbons. It is an excellent solvent of protein and polyester. 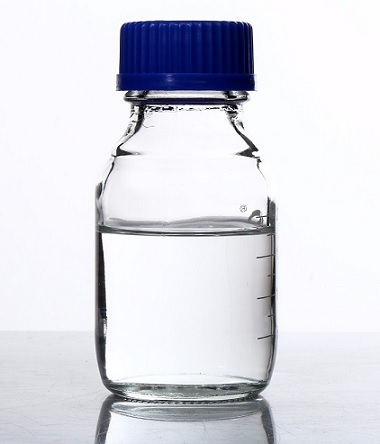 Trifluoroacetic acid is also a good solvent for the organic reaction which allows obtaining certain results which are difficult in the cases of application of common solvents. For example, when quinolone is being catalyzed for hydrogenation in a common solvent, the pyridine ring is preferentially hydrogenated; in contrast, the benzene ring will be preferentially hydrogenated in the presence of trifluoroacetic acid as the solvent. Trifluoroacetic acid is decomposed into carbon dioxide and fluorine in the presence of aniline. It can be reduced by sodium borohydride or lithium aluminum hydride into trifluoroacetic acetaldehyde and trifluoro-ethanol. It is stable at temperature higher than 205 ℃ stable. But its ester and amides derivatives are easily subject to hydrolysis which allows them to prepare carbohydrate, amino acids, and peptide derivative in the form of acid or anhydride. It is easily to be dehydrated under action of phosphorus pentoxide and be converted to trifluoroacetic anhydride.
Trifluoroacetic acid is a kind of important intermediates of fat fluorine. Owing to the special structure of trifluoromethyl, it has a different property from other alcohols and can participate in a variety of organic reactions, especially being used in the field of the synthesis of fluorine-containing pharmaceutical, pesticides and dyes. Its domestic and foreign demand is increasing and has become one of the important intermediates for fluorine-containing fine chemicals.

It is colorless, volatile fuming liquid with a similar odor as acetic acid. It is hygroscopic and has stimulating smell. It is miscible with water, fluorinated alkanes, methanol, benzene, ether, carbon tetrachloride and hexane. It can partially dissolve alkane with over six carbons as well as carbon disulfide.

Trifluoroacetic acid (TFA) is a kind of strong acid with its pKa being 0.23. It can stimulate the body tissue and skin. However, it is only slightly toxic. However, its enrichment in immobilizing surface water will affect agriculture and aquatic systems. Moreover, TFA can generate greenhouse gases CHF3 after undergoing the microbial degradation.
The above information is edited by the chemicalbook of Dai Xiongfeng.

Trifluoroacetic acid is mainly for the production of new pesticide, medicine and dyes, and also has great potential of application and development in the fields of materials and solvents. Trifluoroacetic acid is mainly used for the synthesis of various kinds of trifluoromethyl group or heterocyclic containing herbicides. It is currently available for synthesizing various kinds of novel herbicide containing pyridyl and qunoilyl; acting as a strong proton acid, it is widely applied as the catalyst for alkylation, acylation, and olefin polymerization of aromatic compound; as a solvent, trifluoroacetic acid is a kind of excellent solvent for fluorination, nitration and halogenations. In particular, the excellent protective effect of its trifluoroacetyl derivatives on hydroxy and amino group has very important application in the synthesis of amino acid and poly-peptide synthesis, for example, the compound can be used as the protection agent of tert-butoxycarbonyl (t-boc) which is used for removing amino acids during the synthesis of poly-peptide. Trifluoroacetic acid, as the raw material and modifier for the preparation of the ion membrane, can largely improve the current efficiency of soda industry and significantly extend the working life of the membrane; trifluoroacetic acid can also be used for synthesizing trifluoro-ethanol, trifluoroacetic acetaldehyde and trifluoroacetic anhydride. At room temperature, the mercury trifluoroacetic acid can have mercury-fluorophenyl be able to have mercuration reaction (electrophilic substitution), and can also convert hydrazone to diazo compound. The lead salt of this acid can convert arene to phenol.
In the experiment of reverse phase chromatography for isolation of peptides and proteins, using trifluoroacetic acid (TFA) as the ion-pairing reagents is a common approach. Trifluoroacetic acid in the mobile phase can improve the peak shape and overcome the problem of the peak broadening and trailing issue through interaction with hydrophobic bonded phase and residual polar surface in a variety of models. Trifluoroacetic acid has an advantage over other ion modifier due to that it is volatile and can be easily removed from the sample preparation. On the other hand, the maximum UV absorption peak of trifluoroacetic acid is less than 200 nm, and thus having very small interference on the detection of polypeptides at low wavelengths.

Trifluoroacetic acid is an important reagent in organic synthesis. Starting from it, it can be used for synthesizing a variety of fluorine-containing compounds, pesticides and dyes. Trifluoroacetic acid is a catalyst for esterification and condensation; it can also be used as the protecting agent of hydroxy and amino group which is applied to the synthesis of sugars and peptides.
Preparation of trifluoroacetic acid has a variety of routes:
1. Obtain it through the oxidation of 1, 3, 3, 3-trifluoropropene by potassium permanganate.
2. acetic acid (alternatively; acetyl chloride or acetic anhydride) can have electrochemical fluorination with hydrofluoric acid and sodium fluoride and then be hydrolyzed.
3. it can be obtained by the oxidation of 1, 1, 1-trifluoro-2, 3, 3-trichloropropene through potassium permanganate. This raw material can be made through the Swarts fluorination of hexachloropropylene.
4. Prepared from the oxidation of 2,3-dichloro-hexafluoro-2-butene.
5. it can be generated by the reaction between trichloro-acetonitrile and hydrogen fluoride, which generates trifluoromethyl acetonitrile, which further undergoes hydrolysis to obtain the product.
6. obtained through the oxidation of benzotrifluoride.

1. It can be obtained by the oxidation of 2,3-Dichloro-hexafluoro-2-butene;
2. take fluorine as a catalyst of the oxidation reaction of 2,3-dichloro-hexafluoro-2-butene for producing it; 3 from the oxidation of 3,3,3-trifluoropropene through potassium permanganate, or reaction between trichloro-acetonitrile and hydrogen fluoride, which generates trifluoromethyl acetonitrile, which further undergoes hydrolysis to obtain the product. Moreover, it can also made through the electrochemical fluorination of acetic acid (or acetic anhydride).

Suitable for peptide and protein synthesis.

In organic synthesis; dissolves protein when mixed with liquid SO2.

A colorless fuming liquid with a pungent odor. Soluble in water and denser than water. Corrosive to skin, eyes and mucous membranes. Used to make other chemicals and as a solvent.

Fumes in air. Soluble in water.

Trifluoroacetic acid is a strong acid; attacks many metals [Handling Chemicals Safely 1980. p. 935]. A 30% solution of hydrogen peroxide in Trifluoroacetic acid is often used to destructively oxidize aromatic rings in preference to the side chains. Explosions have occurred, if the excess peroxide is not catalytically destroyed, prior to removal of solvent, [Tetrahedron Lett., 1977, 1703-1704]. The reduction of amides of Trifluoroacetic acid with lithium aluminum hydride are dangerous at all phases of the process, explosions have occurred, [Chem. Eng. News, 1955, 33, 1368].

Trifluoroacetic acid is a highly corrosive substance. Contact of the liquid with the skin, eyes, and mucous membranes can cause severe burns, and ingestion can result in serious damage to the digestive tract. TFA vapor is highly irritating of the eyes and respiratory tract, and inhalation of high concentrations can lead to severe destruction of the upper respiratory tract and may be fatal as a result of pulmonary edema. Symptoms of overexposure to TFA vapor include a burning feeling, coughing, headache, nausea, and vomiting.
Trifluoroacetic acid has not been found to be carcinogenic or to show reproductive or developmental toxicity in humans.

Poison by ingestion and intraperitoneal routes. Moderately toxic by intravenous route. Mildly toxic by inhalation. A corrosive irritant to skin, eyes, and mucous membranes. When heated to decomposition it emits toxic fumes of F-. Used as a strong organic acid catalyst.

The purification of trifluoroacetic acid, reported in earlier editions of this work, by refluxing over KMnO4 for 24hours and slowly distilling has resulted in very SERIOUS EXPLOSIONS on various occasions, but not always. This apparently depends on the source and/or age of the acid. The method is NOT RECOMMENDED. Water can be removed by adding trifluoroacetic anhydride (0.05%, to diminish water content) and distilling. [Conway & Novak J Phys Chem 81 1459 1977]. It can be refluxed and distilled from P2O5. It is further purified by fractional crystallisation by partial freezing and again distilled. Highly TOXIC vapour. Work in an efficient fume hood. [Beilstein 2 IV 458.]

Trifluoroacetic acid and waste material containing this substance should be placed in an appropriate container, clearly labeled, and handled according to your institution's waste disposal guidelines.