Sulfur trioxide, S03, also known as sulfuric anhydride, needles or polymer, exists in a number of modifications that differ in molecular species and crystalline form. It has a white,ice-like modification that melts at 16°C (61°F) and two other as bestos-like forms that melt at the higher temperatures of 33 and 62°C (90 and 144 °F). The colorless liquid or gas form has irritating, toxic fumes and boils at 45 °C (112 °F). 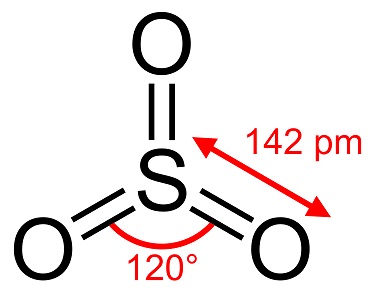 Colorless liquid at ambient temperature and atmospheric pressure; fumes in air.
Sulfur trioxide tends to polymerize, particularly in the presence of traces of water or sulfuric acid. The rate of its polymerization, however, decreasesgreatly as its freezing point is approached. Solid (polymeric) sulfur trioxide exists in three polymorphic phases: alpha-, beta- and gamma- modifications.
The alpha phase is made up of ice-like needles having polymeric crosslinked structure. It melts at 62.3°C and has a vapor pressure of 73 torr at 25°C.
The beta phase is a metastable allotrope with white, asbestos-like, lustrous needles consisting of polymeric molecules, melting at 32.5°C, and with vapor pressure 344 torr at 25°C.
The gamma modification at ordinary temperatures can exist in solid or liquid form. In solid form it is a colloidal ice-like mass melting at 16.8°C. In the liquid form it has a density of 1.9224 g/mL, boiling at 44.8°C. It has a vapor pressure of 433 torr at 25°C. The gamma phase consists of both cyclic trimer and monomer molecules. When solid sulfur trioxide melts, it converts to its gamma phase which on solidification changes to alpha modification.
Critical temperature of SO3 is 217.8°C; critical pressure 80.97 atm; critical density 0.63 g/cm3; the dielectric constant of liquid SO3 at 18°C is 3.11.
Sulfur trioxide dissolves in water forming sulfuric acid and generating large heat.

Sulfur trioxide is used as an intermediate in the manufacture of sulphuric acid and oleum for sulphonation, in particular, of dyes and dye-stuffs, and for the production of anhydrous nitric acid and explosives. Solid Sulfur trioxide is marketed under such names as Sulphan and Triosul, and is used primarily for sulphonation of organic acids. Sulphur tetrafluoride is a fluorinating agent. Sulphur hexafluoride serves as a gaseous insulator in high-voltage electric installations. Sulphyryl fluoride is used as an insecticide and a fumigant.
Sulfonation of organic compounds, especially nonionic detergents, solar energy collectors. It is usually generated in the plant where it is to be used.

Sulfur trioxide is produced as an intermediate in manufacturing sulfuric acid by the contact process (See Sulfuric Acid). The process involves catalytic oxidation of sulfur dioxide to trioxide.
Sulfur trioxide is prepared in the laboratory by heating fuming sulfuric acid, condensing its vapors, and collecting in a cool receiver. When vapors are condensed below 27°C in the presence of trace moisture, all three polymorphic phases of SO3 are produced. They can be separated by fractional distillation. Condensation of the vapors above 27°C forms the liquid variety of gamma-sulfur trioxide.

Sulfur trioxide is highly toxic. It is an irritant and corrosive to mucous membranes. Poisonous if inhaled or swallowed. Contact causes severe burns to skin and eyes.

Sulfur trioxide is used as a sulfating and sulfonating agent for detergent, lubricating oil additives, and other organic compounds; in solar energy collectors. It is also used as an intermediate in sulfuric acid manufacture and in making explosives.

The vapour pressure of Sulfur trioxide rises rapidly with increasing temperatures and, when the α-form melts, the pressure rise is explosive; consequently transport and storage containers must withstand pressures of 10 to 15 atm. Sulfur trioxide reacts vigorously and highly exothermically with water to produce hydrosulphuric acid. When exposed to moist air, it fumes and forms a mist of sulphuric acid which eventually fills all the available space; it also corrodes metals. It is a powerful oxidizing agent and, in the liquid phase, carbonizes organic materials.

Return refillable compressed gas cylinders to supplier. Nonrefillable cylinders should be disposed of in accordance with local, state and federal regulations. Allow remaining gas to vent slowly into atmosphere in an unconfined area or exhaust hood. Refillabletype cylinders should be returned to original supplier with any valve caps and outlet plugs secured and valve protection caps in place.