White or light-yellow crystalline solid (or amorphous solid depending on the method of production); odor of HCl; hygroscopic; melts at 190°C at 2.5 atm; sublimes at 181.2°C; density 2.44 g/cm3 at 25°C; decomposes in water evolving heat; soluble in HCl; soluble in many organic solvents, including absolute ethanol, chloroform, carbon tetrachloride and ether; slightly soluble in benzene. 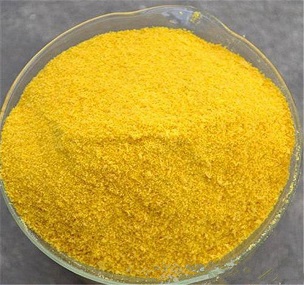 Aluminum chloride has extensive commercial applications. It is used primarily in the electrolytic production of aluminum. Another major use involves its catalytic applications in many organic reactions, including Friedel-Crafts alkylation, polymerization, isomerization, hydrocracking, oxidation, decarboxylation, and dehydrogenation. It is also used in the production of rare earth chlorides, electroplating of aluminum and in many metal finishing and metallurgical operations.

Aluminum chloride is made by chlorination of molten aluminum at temperatures between 650 to 750°C;
2 Al + 3Cl2→ 2AlCl3
or by chlorination of alumina (bauxite or clay) at 800°C in the presence of a reducing agent, such as carbon or CO. It can be prepared by similar high temperature chlorination of bauxite in the presence of a chlorinated organic reductant such as CCl4.
A pelletized mixture of clay, lignite and a small amount of NaCl is chlorinated at 900°C, producing gaseous AlCl3 (Toth process). Alternatively, alumina is mixed with about 20% by weight carbon and a small amount of sodium salt. The mixture is chlorinated at 600°C (Bayer process).
In the laboratory, anhydrous AlCl3 can be prepared by heating the metal with dry HCl gas at 150°C. The product sublimes and deposits in the cool air condenser. Unreacted HCl is vented out.

A yellowish-white crystalline or granular powder made by passing chlorine gas over alumina in a heated state and collecting the product by sublimation. Aluminum chloride was occasionally used in gold and platinum toning baths.

Aluminum chloride is used as a catalyst in many organic reactions.

aluminium chloride: A whitishsolid, AlCl3, which fumes in moist airand reacts violently with water (togive hydrogen chloride). It is knownas the anhydrous salt (hexagonal; r.d.2.44 (fused solid); m.p. 190°C (2.5atm.); sublimes at 178°C) or the hexahydrateAlCl3.6H2O (rhombic; r.d.2.398; loses water at 100°C), both ofwhich are deliquescent. Aluminiumchloride may be prepared by passinghydrogen chloride or chlorine overhot aluminium or (industrially) bypassing chlorine over heated aluminiumoxide and carbon. The chlorideion is polarized by the smallpositive aluminium ion and thebonding in the solid is intermediatebetween covalent and ionic. In theliquid and vapour phases dimer moleculesexist, Al2Cl6, in which thereare chlorine bridges making coordinatebonds to aluminium atoms (seeformula). The AlCl3 molecule can alsoform compounds with other moleculesthat donate pairs of electrons(e.g. amines or hydrogen sulphide);i.e. it acts as a Lewis acid. At hightemperatures the Al2Cl6 molecules inthe vapour dissociate to (planar)AlCl3 molecules. Aluminium chlorideis used commercially as a catalyst inthe cracking of oils. It is also a catalystin certain other organic reactions,especially the Friedel–Craftsreaction.

Contact with the skin or eyes in the presence of moisture causes thermal and acid burns.

Aluminum chloride is not flammable but reacts violently with water, so fires involving this substance should be extinguished with carbon dioxide or dry chemicals. Toxic fumes (HCl and reaction products) can be released during fires.

Aluminum chloride (AlCl3) is a volatile solid which sublimes at 458 K. The vapour formed on sublimation consists of an equilibrium mixture of monomers (AlCl3) and dimers (Al2Cl6). It is used to prepare the powerful and versatile reducing agent lithium tetrahydridoaluminate (LiAlH4). Aluminium trichloride (AlCl3) act as Lewis acids to a wide range of electron-pair donors, and this has led to their widespread use as catalysts. In the important Friedel-Crafts acylation, AlCl3 is used as a strong Lewis acid catalyst in order to achieve the acylation of an aromatic ring.

Aluminium trichloride (AlCl3) act as Lewis acids to a wide range of electron-pair donors, and this has led to their widespread use as catalysts. In the important Friedel–Crafts acylation, AlCl3 is used as a strong Lewis acid catalyst in order to achieve the acylation of an aromatic ring.

It is used as ethylbenzene catalyst, dyestuff intermediate, and detergent alkylate; in making other chemicals and dyes, astringents, deodorants, in the petroleum refining, and the rubber industries

work with this substance should be conducted in a fume hood, and impermeable gloves should be worn at all times when handling AlCl3. Aluminum chloride should be stored in sealed containers under an inert atmosphere in a cool, dry place. Care should be taken in opening containers of this compound because of the possibility of the buildup of HCl vapor from hydrolysis with traces of moisture.

Sublime it several times in an all-glass system under nitrogen at 30-50mm pressure. It has also been sublimed in a stream of dry HCl and has been subjected to a preliminary sublimation through a section of granular aluminium metal [for manipulative details see Jensen J Am Chem Soc 79 1226 1957]. It fumes in moist air.

A strong reducing agent. Contact with air or water forms hydrochloric acid and hydrogen chloride gas. Reaction with water may be violent. Water, alcohol, and alkenes can cause polymerization. Incompatible with nitrobenzene, organic material, and bases. Attacks metal in presence of moisture, forming flammable hydrogen gas.

May be sprayed with aqueous ammonia in the presence of ice and, when reaction is complete, flushed down drain with running water.