Barium oxide is a white to yellowish-white, odorless powder. 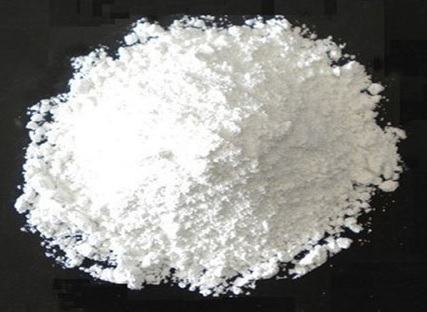 Barium oxide is an alkaline earth flux that melts at 3493°F (1923C).It's an active flux at high temperatures and forms a strong eutectic with boron that can cause even matte glazes to run. Barium oxide gives strong, vivid colors, especially with copper and cobalt. It produces excellent satin and matte surfaces from crystallization. This is worth noting because alumina(in the form of clay) is also used to create matte surfaces, but only produces dull colors. With barium oxide you get both matte surfaces and vivid colors. It's sometimes used in small amounts to produce iron blue celadons. Barium oxide has a high viscosity and medium surface tension so it produces stiff glazes,but it will cause running in glazes that are fired too hot as its fluxing power increases with temperature. It has a medium expansion and contrac- tion rate.
Although barium oxide isn't volatile at ceramic temperatures keep in mind that it's extremely toxic, especially as a carbonate powder, when it becomes an airborne health hazard during mixing,and certainly if it leaches from a fired glaze. It was once used as a rat poison, so handle barium compounds with caution.Barium glazes aren't suitable for functional ware. Under laboratory conditions (i.e.. in pure water) barium carbonate is almost insoluble in water, but in acidic solutions it can become soluble, making it easier to absorb into the skin.
Barium sulfate is insoluble and even has medical uses. It's sometimes used to provide a less toxic form of barium oxide in glazes and clay bodies(as in Wedgwood's Jasperware), but it does release sulfur fumes when fired.
Soluble sources of barium oxide are barium carbonate (almost insoluble), and some frits (slightly soluble); an insoluble source of barium oxide is barium sulfate.

Barium oxide is used as a coating for “hot cathodes” in a variety of electronic devices such as TV’s and lamps. It replaced lead oxide in the production of certain kinds of glass. While lead oxide raised the refractive index of the glass, it also raised the dispersion, i.e refraction of various colors of light resulting in distortion of images which barium oxide does not alter. Barium oxide also has use as an ethoxylation catalyst in the reaction of ethylene oxide and alcohols which takes place between 150 and 200°C.
The thermionic emission from thin evaporated films of barium oxide has been studied extensively. Thin barium oxide films have a good emission following evaporation. The emission improves a little during heat treatment, and is then similar to that from a sprayed cathode coating of barium oxide.

Porous grades are marketed especially for drying gases and solvents (particularly alcohols, aldehydes and petroleum solvents). Swells, but does not become sticky upon absorption of moisture. Used in manufacture of lubricating oil detergents. Also used for making barium methoxide.

It may be also prepared by thermal decomposition of barium nitrate.

A white to yellow powder. May be toxic by ingestion. Irritates skin, eyes and mucous membranes. Used as a drying agent for gasoline and solvents.

BARIUM OXIDE reacts as a strong base. Combines exothermically with all categories of acids. Reacts with carbon dioxide to form barium carbonate [Merck 11th ed. 1989]. Ignites hydroxylamine on contact [Mellor 8:291 1946-47]. Mixtures with mercurous or nickel oxide react vigorously with hydrogen sulfide in air. Explosions may result [Mellor 10:140 1946-47]. Can react, particularly in the presence of moisture, with aluminum and zinc)to form oxides or hydroxides of the metal and generate gaseous hydrogen. May initiate polymerization reactions in polymerizable organic compounds, especially epoxides. May generate flammable and/or toxic gases with ammonium salts, nitrides, halogenated organics, peroxides, and hydroperoxides.

TOXIC; inhalation, ingestion or contact (skin, eyes) with vapors, dusts or substance may cause severe injury, burns or death. Reaction with water or moist air will release toxic, corrosive or flammable gases. Reaction with water may generate much heat that will increase the concentration of fumes in the air. Fire will produce irritating, corrosive and/or toxic gases. Runoff from fire control or dilution water may be corrosive and/or toxic and cause pollution.

Non-combustible, substance itself does not burn but may decompose upon heating to produce corrosive and/or toxic fumes. Vapors may accumulate in confined areas (basement, tanks, hopper/tank cars etc.). Substance will react with water (some violently), releasing corrosive and/or toxic gases and runoff. Contact with metals may evolve flammable hydrogen gas. Containers may explode when heated or if contaminated with water.

It is used to dry gases and solvents and in producing detergents for lubricating oils.