n-Butyl acetate, also known as Butyl acetate, is an organic compound commonly used as a solvent in the production of lacquers and other products. It is also used as a synthetic fruit flavoring in foods such as candy, ice cream, cheeses, and baked goods. Butyl acetate is found in many types of fruit, where along with other chemicals it imparts characteristic flavors. apples, especially of the Red Delicious variety, are fl avored in part by this chemical. It is a colorless flammable liquid with a sweet smell of banana. 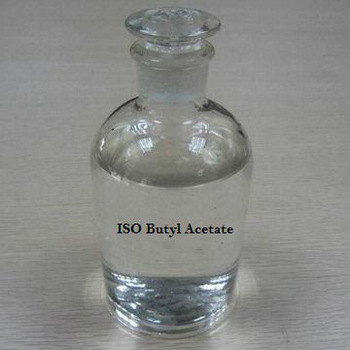 Butyl acetate is a clear, flammable ester of acetic acid that occurs in n-, sec-, and tert- forms (INCHEM, 2005). Butyl acetate isomers have a fruity, banana-like odor (Furia, 1980). Isomers of butyl acetate are found in apples (Nicholas, 1973) and other fruits (Bisesi, 1994), as a well as in a number of food products, such as cheese, coffee, beer, roasted nuts, vinegar (Maarse and Visscher, 1989). Butyl acetate is manufactured via esterification of the respective alcohol with acetic acid or acetic anhydride (Bisesi, 1994). N-butyl acetate is used as a solvent for nitrocellulose-based lacquers, inks, and adhesives. Other uses include manufacture of artificial leathers, photographic film, safety glass, and plastics (Budavari, 1996). Isomers of butyl acetate are also used as flavoring agents, in manicure products, and as larvicides (Bisesi, 1994). The tert-isomer has been used as a gasoline additive (Budavari, 1996). It may be used as a synthetic fruit flavoring in candy, ice cream, cheeses, and baked goods (Dikshith, 2013).

Butyl acetate is a colorless or yellowish liquid with a strong fruity odor. burning and then sweet taste reminiscent of pineapple. It occurs in many fruits and is a constituent of apple aromas. Butyl acetate is incompatible with strong oxidizing agents, strong acids, and strong bases.
There are 4 isomers. At 20 °C, the density of the n-butyl isomer is 0.8825 g/ cm3, and the density of the sec-isomer is 0.8758 g/cm3 (Bisesi, 1994). The n-butyl isomer is soluble in most hydrocarbons and acetone, and it is miscible with ethanol, ethyl ether, and chloroform (Haynes, 2010). It dissolves many plastics and resins (NIOSH, 1981).

Butyl acetate is one of the more important derivatives of n-butyl alcohol produced commercially, is employed as a solvent in rapid drying paints and coatings. In some instances, butyl acetate, C6H12O2, has replaced ethoxyethyl acetate due to the latter’s reported toxicity and teratogenicity.

Butyl Acetate is a flavoring agent which is a clear, colorless liquid possessing a fruity and strong odor. it is sparingly soluble in water and miscible in alcohol, ether, and propylene glycol. it is also termed n-butyl acetate.

ChEBI: The acetate ester of butanol.

Butyl alcohol is combined with acetic acid in the presence of a catalyst such as sulfuric acid. After esterification is complete, the solution is distilled to yield butyl acetate .

By esterification of n-butyl alcohol with acetic acid.

Butyl acetate is an ester. Esters react with acids to liberate heat along with alcohols and acids. Strong oxidizing acids may cause a vigorous reaction that is sufficiently exothermic to ignite the reaction products. Heat is also generated by the interaction of esters with caustic solutions. Flammable hydrogen is generated by mixing esters with alkali metals and hydrides. Attacks many plastics. [Handling Chemicals Safely 1980. p. 233].

Exposures to n-butyl acetate cause harmful effects that include, but are not limited to, coughing and shortness of breath. High concentrations have a narcotic effect, with symp toms such as sore throat, abdominal pain, nausea, vomiting, and diarrhea. High concen trations of n-butyl acetate cause severe poisoning. Prolonged periods of exposure cause adverse effects to the lungs, the nervous system, and the mucous membranes. Repeated skin contact causes skin dryness or cracking, and dermatitis.

The narcotic effects of n-butyl acetate isgreater than the lower alkyl esters of aceticacid. Also, the toxicities and irritant actionsare somewhat greater than n-propyl, iso propyl, and ethyl acetates. Exposure to its vapors at about 2000 ppm caused mild irritation of the eyes and salivation in test animals. A 4-hour exposure to 14,000 ppm wasfatal to guinea pigs. In humans, inhalation of 300-400 ppm of n-butyl acetate may produce moderate irritation of the eyes and throat, and headache.

There are no indications of mutagenic or cytogenic effects for n-butyl acetate.

n-Butyl acetate should be kept stored in a segregated and approved area. Workers should keep the container in a cool, well-ventilated area, closed tightly, and sealed until ready for use. Workers should avoid all possible sources of ignition/spark at the workplace

All butyl acetates are incompatible with nitrates, strong oxidizers; strong alkalies; strong acids. Butyl acetates may form explosive mixture with air; reacts with water, on standing, to form acetic acid and n-butyl alcohol. Violent reaction with strong oxidizers and potassium-tert-butoxide. Dissolves rubber, many plastics, resins and some coatings. May accumulate static electrical charges, and may cause ignition of its vapors

Dissolve or mix the material with a combustible solvent and burn in a chemical incinerator equipped with an afterburner and scrubber. All federal, state, and local environmental regulations must be observed.

On exposure to n-butyl acetate, immediately wash with plenty of water, also under the eyelids, for at least 15 min. Remove contact lenses. n-Butyl acetate is flammable in the pres ence of open flames, sparks, oxidizing materials, acids, and alkalis. It poses explosion risk in the presence of mechanical impact. For health safety, management authorities should provide exhaust ventilation facilities at the workplace to keep the airborne concentrations of vapors of n-butyl acetate below TLV