Sodium cyanide is a white crystalline solid that is odourless when dry but emits a slight odour of HCN in damp air. It is slightly soluble in ethanol and formamide. It is very poisonous. It explodes if melted with nitrite or chlorate at about 450°F. It produces a violent reaction with magnesium, nitrites, nitrates, and nitric acid. On contact with acid, acid fumes, water, or steam, it will produce toxic and flammable vapours.for the extraction of gold and silver ore, copper, zinc, carburizing, medicine and so on. For metallurgy, steel quenching, electroplating, extraction (forming cyanide), organic synthesis of raw materials, insecticidal and anti-corrosion. 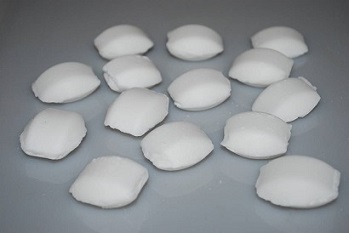 Sodium cyanide binds to the ferric iron of oxidized cytochrome oxidase, disabling its ability to deliver oxygen, resulting in tissue hypoxia, "intracellular asphyxia." Rat: oral administration-LD50: 6.44mg / kg, adult lethal dose 200mg. Being highly toxic.
It can be absorbed through the respiratory tract, digestive tract and skin. Animals, after inhaling sodium cyanide aerosol of 40mg-90mg / m3, get symptoms of irritations, irritability and salivation after 25 to 43 minutes. Inhalation of 150mg ~ 170mg / m3 for 62 to 76 minutes or inhalation of 400mg ~ 500mg / m3 for 20 minutes can cause death. Human oral LD50 is about 1mg ~ 2mg / kg. Under normal conditions of production, sodium cyanide dust is often inhaled at room temperature, and sodium vapor can be inhaled during heat treatment. Misdiagnosis is also one of the common causes of poisoning. In the event of a fire, try to prevent the generation of toxic hydrogen cyanide gas. Do not use carbon dioxide or acid-base foam fire extinguishers. Fire-fighting operation personnel must wear protective equipment, try not to contact with water containing sodium cyanide. This product is toxic with poisoning causing dizziness and other uncomfortable symptoms. When found, patients should immediately leave the contaminated area to the fresh air and taken 1% soda solution as first aid, at the same time, go to the hospital for treatment. UN No.: 1689/6257 / 6.1-04 / 215.

For the extraction of gold and silver from ores; gold (or silver) reacts with sodium cyanide in the presence of air to form the complex sodium cyanurate, which dissolves the gold from the ore. Further reaction with zinc can displace gold, generating sodium cyanate and free the gold out.
4Au + 8NaCN + O2 + 2H2O → 4Na [Au (CN) 2] + 4NaOH
Na [Au (CN) 2] + Zn → Na [Zn (CN) 3] + Au
Others can also be used for iron blue (intermediate sodium ferrocyanide production), cyanuric chloride (intermediate product of cyanide production), plating bath (copper, cadmium and other plating, DL-methionine synthesis). It can act as liquid steel carburizing agent with barium chloride (usually accompanied with a bath temperature of 800 °C or more; should add salts that don’t cause NaCN evaporation at high temperature) , and for pesticides and other purposes.

1.(Castner improved method) sodium metal and ammonia as raw material to generate sodium amide, and then subjects to carbon reduction at 700 ~ 800 ℃to obtain the product [1].
2Na + 2NH3 → 2NaNH2 + H2
NaNH2 + C → [1] + H2
2. Natural gas (methane), ammonia, air as raw materials; their mixture is passed through the catalyst bed at 1000 ℃to generate hydrogen cyanide, followed by reaction with sodium hydroxide to obtain it [1].

Sodium cyanide is found as white granules, flakes or lumps. Sodium cyanide is shipped as pellets or briquettes. Odorless when dry. It absorbs water from air (is hygroscopic or deliquescent). Hydrogen cyanide gas released by sodium cyanide has a distinctive mild, bitter almond odor, but a large proportion of people cannot detect it; the odor does not provide adequate warning of hazardous concentrations.

Sodium cyanide is used for electroplating metals such as zinc, copper, cadmium, silver, and gold, and their alloys; for extracting gold and silver from ores; and as a fumigant and a chelating agent. It occurs in many varieties of maniocs (cassava), especially in bitter manioc.

Sodium cyanide was first prepared in 1834 by heating Prussian Blue, a mixture of cyanogen compounds of iron, and sodium carbonate and extracting sodium cyanide from the cooled mixture using alcohol. Sodium cyanide remained a laboratory curiosity until 1887, when a process was patented for the extraction of gold and silver ores by means of a dilute solution of cyanide.

sodium cyanide: A white orcolourless crystalline solid, NaCN,deliquescent, soluble in water and inliquid ammonia, and slightly solublein ethanol; cubic; m.p. 564°C; b.p.1496°C. Sodium cyanide is now madeby absorbing hydrogen cyanide insodium hydroxide or sodium carbonatesolution. The compound is extremelypoisonous because it reacts with the iron in haemoglobin in theblood, so preventing oxygen reachingthe tissues of the body. It is used inthe extraction of precious metals andin electroplating industries. Aqueoussolutions are alkaline due to salt hydrolysis.

Sodium cyanide can be prepared by several methods (See Potassium Cyanide).
It is prepared by passing hydrogen cyanide through a 50% aqueous solution of sodium hydroxide followed by evaporation of the solution in vacuum: NaOH + HCN → NaCN + H2O
Another method is to reduce sodamide with carbon at red heat: NaNH2 + C → NaCN + H2↑
Also, sodium cyanide can be made by heating a mixture of sodium carbonate and carbon with ammonia at high temperatures: Na2CO3 + 4C + 2NH3 → 2NaCN + 3CO↑ + 3H2↑.

Sodium cyanide, NaCN, white solid, soluble, very poisonous, formed (1) by reaction of sodamide and carbon at high temperature, (2) by reaction of calcium cyanamide and sodium chloride at high temperature, reacts in dilute solution in air with gold or silver to form soluble sodium gold or silver cyanide, and used for this purpose in the cyanide process for recovery of gold. The percentage of available cyanide is greater than in potassium cyanide previously used. Used as a source of cyanide, and for hydrocyanic acid.

Sodium cyanide is weakly basic. Reacts with acids of all kinds to generate quantities of very poisonous hydrogen cyanide gas. Incompatible with strong oxidizing agents, especially if solution dries out. Gives insoluble products with silver(I), mercury(I) and lead(II) ions that may decompose violently under certain conditions.

Toxic by ingestion and inhalation.

Sodium cyanide is a highly poisonous compound by oral intake and by ocular and skin absorption. Accidental ingestion of a small quantity; as low as 100–150 mg could result in immediate collapse and instantaneous death in humans. At a lower dosage it can cause nausea, vomiting, hallucination, headache, and weakness. The toxicology of NaCN is the same as that of HCN. The metal cyanide forms HCN rapidly in the body, causing immediate death from a high dosage.
The lethal effect from cyanide poisoning varied with species. Investigating the acute oral toxicity of sodium cyanide in birds, Wiemeyer et al. (1986) observed that the LD50 values for the flesh-eating birds were lower than that for the birds that fed on plant material; vulture 4.8 mg/kg versus chicken 21 mg/kg. In a study on marine species, Pavicic and Pihlar (1983) found that at 10 ppm concentration of NaCN, invertebrates were more sensitive than fishes. In animals, the lethal dose of NaCN were in the same range by different toxic routes. A dose of 8 mg NaCN/kg resulted in ataxia, immobilization, and death in coyotes (Sterner 1979); however, the lethal time was longer, at 18 minutes.
Ballantyne (1983b) studied the acute lethal toxicity of sodium and other cyanides by ocular route. He found that cyanide instilled into the eye was absorbed across conjunctival blood vessels causing systemic toxicity and death within 3–12 minutes of the eye being contaminated. The toxicity of the cyanide did not decrease by mixing the solid with an inert powder such as kaolin.
LD50 value, intraperitoneal (mice): 4.3 mg/kg
LD50 value, oral (rats): 6.4 mg/kg
Sodium cyanide is a teratogen, causing fetus damage and developmental abnormalities in the cardiovascular system in hamsters (NIOSH 1986).
Sodium cyanide reacts with acids to form highly toxic hydrogen cyanide. There could be a slow liberation of HCN in contact with water.

Sodium cyanide is a white crystalline solid that is odorless when dry, but emits a slight odor of hydrogen cyanide in damp air. It is slightly soluble in ethanol and formamide. It is very poisonous. It explodes if melted with nitrite or chlorate at about 450°F. It produces a violent reaction with magnesium, nitrites, nitrates, and nitric acid. On contact with acid, acid fumes, water, or steam, it produces toxic and flammable vapors. Synonyms for sodium cyanide are hydrocyanic acid, sodium salt, and cyanide of sodium.

sodium cyanide and other water-soluble cyanides are used as modifying reagents for selective flotation of ores containing galena, sphalerite and gangue minerals.

A deadly human poison by ingestion. A deadly experimental poison by ingestion, intraperitoneal, subcutaneous, intravenous, parenteral, intramuscular, and ocular routes. An experimental teratogen. Human systemic effects by ingestion: hallucinations, dstorted perceptions, muscle weakness, and gastritis. Experimental reproductive effects. hydrocyanic acid physiologically, inhibiting tissue oxidation and causing death through asphyxia. Cyanogen is probably as toxic as hydrocyanic acid; the nitriles are generally considered somewhat less toxic, probably because of their lower volathty. The nonvolaule cyanide salts appear to be relatively nonhazardous systemically, so long as they are not ingested and care is taken to prevent the formation of hydrocyanic acid. Workers, such as electroplaters and picklers, who are daily exposed to cyanide solutions may develop a “cyanide” rash, characterized by itching and by macular, papular, and vesicular eruptions. Frequently there is secondary infection. Exposure to small amounts of cyanide compounds over long periods of time is reported to cause loss of appetite, headache, weakness, nausea, dizziness, and symptoms of irritation of the upper respiratory tract and eyes. moisture, acid. Many cyanides evolve hydrocyanic acid rather easily. This is a flammable gas and is highly toxic. Carbon dioxide from the air is sufficiently acidc to liberate hydrocyanic acid from cyanide solutions. Explodes if melted with nitrite or chlorate @ about 450”. Violent reaction with F2, Mg, nitrates, HNO3, nitrites. Upon contact with acid, acid fumes, water, or steam, it wdl produce toxic and flammable vapors of CNand NanO. Used in the extraction of gold and silver ores, in electroplating, and in insecticides. See also CYANIDE and HYDROCYANIC ACID, The volaule cyanides resemble Flammable by chemical reaction with heat,

Sodium cyanide is used as a solid or in solution to extract metal ores, in electroplating and metal cleaning baths; in metal hardening; in treatment of rabbit and rat burrows and holes and termite nests; in insecticides

In particular, work with cyanides should be conducted in a fume hood to prevent exposure by inhalation, and splash goggles and impermeable gloves should be worn at all times to prevent eye and skin contact. Cyanide salts should be stored in a cool, dry location, separated from acids.

Consult with environmental regulatory agencies for guidance on acceptable disposal practices. Generators of waste containing this contaminant (≥100 kg/mo) must conform to EPA regulations governing storage, transportation, treatment, and waste disposal. In accordance with 40CFR165, follow recommendations for the disposal of pesticides and pesticide containers. Must be disposed properly by following package label directions or by contacting your local or federal environmental control agency, or by contacting your regional EPA office. Add strong alkaline hypochlorite and react for 24 hours. Then flush to sewer with large volumes of water.