Benzonitrile is a clear colorless liquid with an almond-like odor. Flash point 161°F. Denser (at 8.4 lb / gal) than water and slightly soluble in water. Used as a specialty solvent and to make other chemicals. 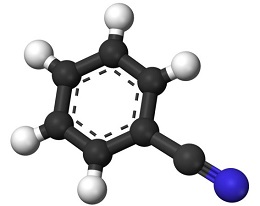 Bezonitrile is a colorless, oily liquid. It has an almond odor.

Benzonitrile is reported to be found in natural cocoa aroma), in milk products, roasted filberts and peanuts and cooked trassi . Benzonitrile also has been detected in the thermal decomposition products of flexible polyurethane foam.

The most important commercial use for benzonitrile is the synthesis of benzoguanamine, which is a derivative of melamine and is used in protective coatings and molding resins.

Manufacture of benzoguanamine; intermediate for rubber chemicals; solvent for nitrile rubber, spe- cialty lacquers, and many resins and polymers, and for many anhydrous metallic salts.

Benzonitrile can be prepared by one of the following methods: 1) on a small scale by the dehydration in an inert solvent with phosphorus oxychloride or benzenesulfonyl chloride and an organic amine; 2) from benzoic acid by heating with lead thiocyanate; 3) by heating sodium benzenesulfonate with sodium cyanide or by adding benzenediazonium chloride solution to a hot aq sodium cyanide solution containing cupric sulfate and distilling by ammoxidation of toluene.

ChEBI: A nitrile that is hydrogen cyanide in which the hydrogen has been replaced by a phenyl group.

Benzonitrile can be produced in high yield by the vapor-phase catalytic ammoxidation of toluene.

Benzonitrile may enter the human body by ingestion, absorption through the skin, or inhalation. The earliest symptoms of cyano compound intoxication may be weakness, headaches, confusion, and occasionally nausea and vomiting. The respiratory rate and depth will usually be increased at the beginning and at later stages become slow and gasping. Blood pressure is usually normal, especially in the mild or moderately severe cases, although the pulse rate is usually more rapid than normal.

Following an occupational accident in which a worker's head and clothing were drenched with benzonitrile (Zeller et al 1969), the worker suffered severe respiratory distress and tonic convulsions between periods of unconsciousness which lasted for 75 min. Thereafter he gradually recovered, but several years later he experienced episodes of unconsciousness which might have been related to the benzonitrile exposure.
Extensive reddening and blister formation resulted from accidental exposure of human skin to benzonitrile (Zeller et al 1969). A maximization test (Kligman 1966; Kligman and Epstein 1975) was also carried out on 35 volunteers. Benzonitrile was tested at a concentration of 2% in petrolatum on 27 volunteers in a mixed panel, and was found to produce no sensitization reactions after a 48 h closed-patch test (Opdyke 1979).

Special Hazards of Combustion Products: Toxic hydrogen cyanide and oxides of nitrogen may form in fire.

Benzonitrile is used as an intermediate for rubber chemicals and as a solvent for nitrile rubber, specialty lacquers, many resins, polymers and for many anhydrous metallic salts (HSDB 1988; Hawley 1981). It is principally used as an intermediate for benzoguanamine (HSDB 1988). It is also used as an additive in nickel-plating baths, separating naphthalene and alkylnaphthalenes from non-aromatics by azetropic distillation; as jet-fuel additive; in cotton bleaching baths; as a drying additive for acrylic fibers; and in the removal of titanium tetrachloride and vanadium oxychloride from silicon tetrachloride (HSDB 1988; Smiley 1981). Benzonitrile is also used in perfumes at a maximum level of 0.2% in the final product (Opdyke 1979).

Bezonitrile is used as an electroplating agent; in organic synthesis of pharmaceuticals; dyestuffs; rubber chemicals; as a solvent and chemical intermediate.

Dry benzonitrile with CaSO4, CaCl2, MgSO4 or K2CO3, and distil it from P2O5 in an all-glass apparatus, under reduced pressure (b 69o/10mm), collecting the middle fraction. Distillation from CaH2 causes some decomposition of benzonitrile. Isonitriles can be removed by preliminary treatment with conc HCl until the odour of isonitrile (carbylamine) has gone, followed by preliminary drying with K2CO3. (This treatment also removes amines.) Steam distil (to remove small quantities of carbylamine). The distillate is extracted into ether, washed with dilute Na2CO3, dried overnight with CaCl2, and the ether is removed by evaporation. The residue is distilled at 40mm (b 96o) [Kice et al. J Am Chem Soc 82 834 1960]. Conductivity grade benzonitrile (specific conductance 2 x 10-8 mho) is obtained by treatment with anhydrous AlCl3, followed by rapid distillation at 40-50o under vacuum. After washing with alkali and drying with CaCl2, the distillate is redistilled in a vacuum several times at 35o before fractionally crystallising several times by partial freezing. It is dried over finely divided activated alumina from which it is withdrawn when required [Van Dyke & Harrison J Am Chem Soc 73 402 1951]. [Beilstein 9 IV 892.]

May form explosive mixture with air. Strong acids which can release hydrogen cyanide. Incompatible with oxidizers (chlorates, nitrates, peroxides, permanganates, perchlorates, chlorine, bromine, fluorine, etc.); contact may cause fires or explosions. Keep away from alkaline materials, strong bases, strong acids, oxoacids, epoxides. Nitriles may polymerize in the presence of metals and some metal compounds. They are incompatible Benzonitrile 403 with acids; mixing nitriles with strong oxidizing acids can lead to extremely violent reactions. Nitriles are generally incompatible with other oxidizing agents such as peroxides and epoxides. The combination of bases and nitriles can produce hydrogen cyanide. Nitriles are hydrolyzed in both aqueous acid and base to give carboxylic acids (or salts of carboxylic acids). These reactions generate heat. Peroxides convert nitriles to amides. Nitriles can react vigorously with reducing agents. Acetonitrile and propionitrile are soluble in water, but nitriles higher than propionitrile have low aqueous solubility. They are also insoluble in aqueous acids.

(1) Mix with calcium hypochlorite and flush to sewer with water or (2) incinerate.