Nitrobenzene (chemical formula: C6H4NO2) is a yellowish, oily, aromatic nitro-compound. The most important application of nitrobenzene (consuming 95%) is for the manufacturing of aniline, which is an important industrial precursor. Besides aniline, it can also be used to generate related derivatives such as azobenzene, nitrosobenzene and phenylhydroxylamine. Moreover, it can be used for the production of lubricating oils, dyes, drugs, pesticides, and synthetic rubber. Another special application of it is masking unpleasant odors emitting from shoe, floor polisher, and leather as well as paint solvents. In addition, it can sometime used as a solvent, especially for electrophilic reagents in the laboratory. The nitrobenzene is mainly manufactured through the nitration of benzene with the mixture of concentrated sulfuric acid, water and nitric acid. However, the reaction process is quite dangerous due to the exothermicity of the reaction.

Nitrobenzene has a single nitro group attached to a benzene ring. It is an oily yellow liquid with an almond-like odor.It is moderately soluble in water (1.9 g/l at 20 °C) and is soluble in alcohol, acetone, ether, and benzene (IARC, 1996). It has an explosive limit of 1.8% by volume in air, representing a fire hazard. 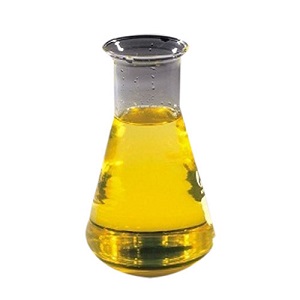 Aromatic nitro compounds mixed with nitrobenzene are explosives of high sensitivity and detonation velocities and are spark detonatable).

Most nitrobenzene (97%) is used in the manufacture of aniline (IARC 1996, HSDB 2009). Miscellaneous uses include the manufacture of benzidine, quinoline, azobenzene, pyroxylin compounds, isocyanates, pesticides, rubber chemicals, pharmaceuticals, and dyes such as nigrosines and magenta. Nitrobenzene is found in soaps and shoe and metal polishes and is used as a solvent for cellulose ester, in modifying esterification of cellulose acetate, and in refining lubricating oils (HSDB 2009). Nitrobenzene also is used as a solvent in petroleum refining and the synthesis of other organic compounds, such as acetaminophen (ATSDR 1990).

The primary use of nitrobenzene is in the captive production of aniline, with about 97.5% of nitrobenzene production consumed in this process. The major use of aniline is in the manufacture of polyurethanes. Nitrobenzene is also used as a solvent in petroleum refining, in the manufacture of cellulose ethers and acetate, and in Friedel-Crafts reactions to hold the catalyst in solution. It is also used in the synthesis of other organic compounds including acetaminophen, which is an over-the-counter analgesic commonly known as Tylenol?.
Nitrobenzene is used as a flavoring agent, a perfume for soaps and as a solvent for shoe dyes.

Nitrobenzene is an organic compound used a standard for detection and analyses as well as its removal from the environment. The compound’s cytotoxic effects have been studied in a hepatocarcinoma cell line.

ChEBI: A nitroarene consisting of benzene carrying a single nitro substituent. An industrial chemical used widely in the production of aniline.

Nitrobenzene is produced commercially by the exothermic nitration of benzene with fuming nitric acid in the presence of a sulfuric acid catalyst at 50 to 65℃. The crude nitrobenzene is passed through washer-separators to remove residual acid and is then distilled to remove benzene and water.

A yellow organic oil obtained by refluxing benzene with a mixture of concentrated nitric and sulfuric acids. The reaction is a typical electrophilic substitution on the benzene ring by the nitryl cation (NO2+).

The routes of entry of nitrobenzene intothe body are the inhalation of its vaporsor absorption of the liquid or the vaporthrough the skin and, to a much lesserextent, ingestion. The target organs are theblood, liver, kidneys, and cardiovascular system. Piotrowski (1967) estimated that in anexposure period of 6 hours to a concentration of 5 mg/m3, 18 mg of nitrobenzene wasabsorbed through the lungs and 7 mg throughthe skin in humans. Furthermore, about 80%of inhaled vapor is retained in the respiratorytract. The dermal absorption rate at this concentration level is reported as 1 mg/h, whilethe subcutaneous absorption of the liquidis between 0.2 and 0.3 mg/cm3/h (ACGIH1986).
The symptoms of acute toxicity are headache, dizziness, nausea, vomiting, and dyspnea. Subacute and chronic exposure cancause anemia. Nitrobenzene effects the conversion of hemoglobin to methemoglobin. Itis metabolized to aminophenols and nitrophenols to about 30%, which are excreted.

Nitrobenzene is mainly utilized for aniline production. The aniline is used primarily for the manufacture of 4,4'-methylenebis (phenyl isocyanate) and polymers thereof (50%). The second largest use of aniline is in the manufacture of chemicals for rubber production (30%). Dyes and dye intermediates, hydroquinone and drugs account for about 8% of the aniline produced, while 10% of the aniline is converted to agricultural products such as pesticides and defoliants (Northcott 1978). It also is used as a solvent for cellulose ethers and an ingredient in polishes for metals and shoes (HSDB 1988).

Nitrobenzene is used in the manufacture of explosives and aniline dyes and as solvent and intermediate. It is also used in floor polishes; leather dressings and polished; and paint solvents, and to mask other unpleasant odors. Substitution reactions with nitrobenzene are used to form m-derivatives. Pregnant women may be especially at risk with respect to nitrobenzene as with many other chemical compounds, due to transplacental passage of the agent. Individuals with glucose-6-phosphate dehydrogenase deficiency may also be special risk groups. Additionally, because alcohol ingestion or chronic alcoholism can lower the lethal or toxic dose of nitrobenzene, individuals consuming alcoholic beverages may be at risk.

Nitrobenzene is reasonably anticipated to be a human carcinogenbased on sufficient evidence of carcinogenicity from studies in experimental animals.

Biological. In activated sludge, 0.4% of the applied nitrobenzene mineralized to carbon dioxide after 5 d (Freitag et al., 1985). Under anaerobic conditions using a sewage inoculum, nitrobenzene degraded to aniline (Hallas and Alexander, 1983). When nitrobenzene (5 and 10 mg/L) was statically incubated in the dark at 25 °C with yeast extract and settled domestic wastewater inoculum, complete biodegradation with rapid acclimation was observed after 7 to 14 d (Tabak et al., 1981). In activated sludge inoculum, 98.0% COD removal was achieved in 5 d. The average rate of biodegradation was 14.0 mg COD/g?h (Pitter, 1976).
Razo-Flores et al. (1999) studied the fate of nitrobenzene (50 mg/L) in an upward-flow anaerobic sludge bed reactor containing a mixture of volatile fatty acids and/or glucose as electron donors. The nitrobenzene loading rate and hydraulic retention time for this experiment were 43 mg/L?d and 28 h, respectively. Nitrobenzene was effectively reduced (>99.9%) to aniline (92% molar yield) in stoichiometric amounts for the 100-d experiment.
Photolytic. Irradiation of nitrobenzene in the vapor phase produced nitrosobenzene and 4- nitrophenol (HSDB, 1989). Titanium dioxide suspended in an aqueous solution and irradiated with UV light (λ = 365 nm) converted nitrobenzene to carbon dioxide at a significant rate (Matthews, 1986). A carbon dioxide yield of 6.7% was achieved when nitrobenzene adsorbed on silica gel was irradiated with light (λ >290 nm) for 17 h (Freitag et al., 1985).
Chemical/Physical. In an aqueous solution, nitrobenzene (100 μM) reacted with Fenton’s reagent (35 μM). After 15 min, 2-, 3-, and 4-nitrophenol were identified as products. After 6 h, about 50% of the nitrobenzene was destroyed. The pH of the solution decreased due to the formation of nitric acid (Lipczynska-Kochany, 1991). Augusti et al. (1998) conducted kinetic studies for the reaction of nitrobenzene (0.2 mM) and other monocyclic aromatics with Fenton’s reagent (8 mM hydrogen peroxide; [Fe+2] = 0.1 mM) at 25 °C. They reported a reaction rate constant of 0.0260/min.

Nitrobenzene vapor is readily absorbed through the skin and lungs. At an airborne nitrobenzene concentration of 10 mg/m3 humans may absorb 18 to 25 mg in 6 h through the lungs and from 8 to 19 mg through the skin in the same length of time .
Urine is the major route of excretion of nitrobenzene metabolites in rabbits , rats and mice . The most abundant metabolite in earlier studies in rabbits and rats was p-aminophenol. This compound, or its glucuronide or sulfate conjugates, accounted for 19% to 31% of the dose. In a later study in rats in which the acid hydrolysis step employed by earlier workers to cleave conjugates was replaced by enzyme hydrolysis, no p-aminophenol was found in the urine of male Fischer-344 or CD rats .
About 9% of a nitrobenzene dose was excreted by B6C3F1 mice as the sulfate conjugate. The major metabolites found in Fischer-344 rat urine were p-hydroxyacetanilide sulfate (19% of the dose), p-nitrophenol sulfate (20% of the dose) and m-nitrophenol sulfate (10% of the dose) .
In addition, an unidentified metabolite accounted for about 10% of the dose .
Male CD rats excreted the same metabolites after an oral dose of nitrobenzene, but in slightly different proportions. They excreted about half as much of the dose as the glucuronide or sulfate conjugates of P-hydroxyacetanilide (9% of the dose) and P-nitrophenol (13% of the dose), approximately the same amount of m-nitrophenol (8% of the dose), and about twice as much as the unidentified metabolite. Interestingly, whereas Fischer-344 rats excreted the phenolic metabolites of nitrobenzene exclusively as sulfates, CD rats excreted the same metabolites in the free form (15-17% of the total metabolite) and as glucuronides (4-20% of the total metabolite).
Approximately 4% of the dose also was excreted as p-hydroxyacetanilide by B6C3F1 mice and as p- and m-nitrophenol (7% and 6% of the dose, respectively) sulfates, glucuronides and free metabolites .
Clearly, ring hydroxylation and reduction are important metabolic steps in the biotransformation of nitrobenzene in rabbits, rats, mice and humans . Since no significant isotope effect was found in the metabolism of deuterated nitrobenzene to these products in rats in vivo , the o- and p-nitrophenols may be formed through an arene oxide intermediate. A significant isotope effect was noted in the formation of m-nitrophenol from deuterated nitrobenzene in the same rats, leading to the conclusion that m-nitrophenol is formed by a direct oxygen insertion mechanism or by some other mechanism which does not involve an arene oxide intermediate. The reduction of nitrobenzene in vivo is largely, if not exclusively, due to the action of anaerobic intestinal microflora. Treatment with antibiotics totally eliminated the ability of cecal contents of Fischer-344 rats to reduce nitrobenzene in vitro, and rats treated with antibiotics eliminated p-hydroxyacetanilide as 0.9% of an oral dose of nitro-benzene. Normal rats excreted 16.2% of an oral dose of nitrobenzene as that metabolite .
The reduction of most nitro compounds by hepatic microsomes is not detectable under aerobic conditions, but is readily observable under anaerobic conditions. Mason and Holtzman proposed that the first intermediate in the microsomal reduction of nitroaromatic compounds is the nitro anion radical, the product of a one electron transfer to nitrobenzene or other nitroaromatic compound. Oxygen would rapidly oxidize the radical to yield the parent nitro compound and Superoxide anion. Both the nitro anion radical and Superoxide anion are potentially toxic compounds.
Both P-nitrophenol and P-aminophenol have been detected in human urine after exposure to nitrobenzene. p-Aminophenol has been found only after large accidental exposures and acid hydrolysis of urine. Since acid conditions convert p-acetamidophenol to P-aminophenol, the identity of the metabolite actually excreted is in doubt. P-Nitrophenol has been found in the urine of volunteers exposed to low inhalation doses of nitrobenzene, and Kuzelova and Popler have suggested that urinary P-nitrophenol be used to monitor exposure to nitrobenzene.

Common impurities include nitrotoluene, dinitrothiophene, dinitrobenzene and aniline. Most impurities can be removed by steam distillation in the presence of dilute H2SO4, followed by drying with CaCl2, and shaking with, then distilling at low pressure from BaO, P2O5, AlCl3 or activated alumina. It can also be purified by fractional crystallisation from absolute EtOH (by refrigeration). Another purification process includes extraction with aqueous 2M NaOH, then water, dilute HCl, and water, followed by drying (CaCl2, MgSO4 or CaSO4) and fractional distillation under reduced pressure. The pure material is stored in a brown bottle, in contact with silica gel or CaH2. It is very hygroscopic. [Beilstein 5 H 233, 5 I 124, 5 II 171, 5 III 591, 5 IV 708.]