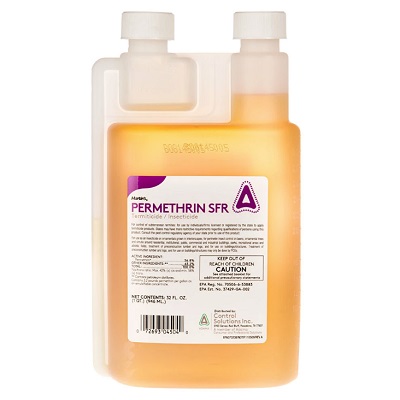 Permethrin, a pyrethroid insecticide with little mammalian toxicity, has been marketed as a tick repellent. Permethrin is the only synthetic pyrethroid that is used worldwide for head lice. The spray formulation is the most widely available form. Once applied to clothing, it is stable through several wash cycles. It is also suitable for treating sleeping bags, tents, and fabric used for insect screening. A liquid concentrate has been used to impregnate fabric for as long as the life of the garment. Permethrin is particularly helpful in the prevention of tick and chigger bites. These crawling arthropods must travel across the treated fabric, whereas flying insects tend to be attracted directly to exposed skin. The combination of a DEET-containing repellent and permethrin-treated clothing is generally highly ffective against a wide range of biting arthropods.

Permethrin is a synthetic pyrethroid active against lice, ticks, mites, and fleas. It acts on neural cellmembranes, delaying repolarization and causing paralysis. The compound has no reported adverse properties, is heat and light stable, has 70% to 80% ovicidal activity, and leaves an active residue on the scalp. Permethrin is 26 times less toxic than lindane and 3 times less toxic than pyrethrins. A 1% permethrin cream rinse (Nix) preparation with a single application was determined to be more effective than treatment with RID. Permethrin-treated military uniforms are effective against human body lice. Apply the cream rinse for 10 minutes and rinse off with water. Localized pruritus may be reported with use of this product.

Labelled Permethrin (P288500). Synthetic pyrethroid insectide, more stable to light and at least as active as the natural pyrethrins and with low mammalian toxicity.

For the treatment of infestation with Sarcoptes scabiei (scabies); antihyperlipidemic; cholesterol sequestrant.

ChEBI: A cyclopropanecarboxylate ester in which the esterifying alcohol is 3-phenoxybenzyl alcohol and the cyclopropane ring is substituted with a 2,2-dichlorovinyl group and with gem-dimethyl groups.

Permethrin is a synthetic pyrethroid active against lice, ticks, mites, and fleas. It acts on neural cellmembranes, delaying repolarization and causing paralysis. The compound has no reported adverse properties, is heat and light stable, has 70% to 80% ovicidal activity, and leaves an active residue on the scalp.
Permethrin 0.5% spray kills ticks and repels mosquitoes and stable flies. It is broken down when applied to skin and, hence, should be applied to clothing, shoes, tents, and so on. Spray only enough to moisten the material. Spray on clothing at least 2 hours before wearing. One treatment should last through a few washings.

Pyrethroids, also called pyrethrinoids, are neurotoxic synthetic compounds used as insecticides, with irritant properties. Cypermethrin and fenvalerate have been reported as causing positive allergic patch tests, but only fenvalerate was relevant in an agricultural worker.

Permethrin is a synthetic pyrethroid that interferes with the influx of sodium through cell membranes, leading to neurologic paralysis and death of the mite. There is minimal percutaneous absorption (<2%), which is rapidly hydrolyzed and excreted in the urine. Permethrin 5% dermal cream (Elimite) is applied for 8 to 12 hours to the entire body from the chin down and is then washed off.

Permethrin is 3-(2,2-Dichloroethenyl)-2,2-dimethylcyclopropanecarboxylicacid (3-phenoxyphenyl)methylester or 3-(phenoxyphenyl)methyl (±)-cis, trans-3-(2,2-dichloroethenyl)-2,2-dimethylcyclopropanecarboxylate(Nix). This synthetic pyrethrinoid compound is more stablechemically than most natural pyrethrins and is at least as activeas an insecticide. Of the four isomers present, the1(R),trans and 1(R),cis-isomers are primarily responsiblefor the insecticidal activity. The commercial product is amixture consisting of 60% trans and 40% cis racemic isomers.It occurs as colorless to pale yellow low-melting crystalsor as a pale yellow liquid and is insoluble in water butsoluble in most organic solvents.
Permethrin exerts a lethal action against lice, ticks, mites,and fleas. It acts on the nerve cell membranes of the parasitesto disrupt sodium channel conductance. It is used as apediculicide for the treatment of head lice. A single applicationof a 1% solution effects cures in more than 99% ofcases. The most frequent side effect is pruritus, which occurredin about 6% of the patients tested.

Permethrin is synthetic pyrethroid that acts as an adulticide insecticide/miticide. It has knockdown activity against fleas, lice, ticks, and certain mites (e.g., Cheyletiella, Sarcoptes scabiei) and also has repellant activity. In small animal medicine, it is used primarily for fleas and ticks on dogs. In large animal and food animal medicine, there are many products (not listed below) available for pour-on, dusting, and spray use for flies, lice, mites, mosquitoes, ticks and keds.
Permethrin acts by disrupting the sodium channel current in arthropod nerve cell membranes, resulting in paralysis and death.

Permethrin was one of the first photostable pyrethroids suitable for field use.It served as a precursor for others such as its α-cyano analogue, cypermethrin. As it lacks the cyano group it has no chirality at the acarbon atom and therefore consists of a mixture of only four isomers. It is hydrolysed more readily than cypermethrin because it is an ester of a primary alcohol.
Much of the early research on the metabolism of the synthetic, photostable pyrethroids was conducted by Casida and co-workers on permethrin. The published results greatly assisted subsequent work on the analogues. This is stressed because some of the information reported below will draw on the metabolic schemes given in the cypermethrin entry.
The environmental fate of permethrin and its metabolism in plants, insects, animals and fish have been reported. The insecticide is metabolised by ester cleavage to its constituent acid and alcohol and subsequent conjugation of these. The primary metabolites are also subject to oxidation prior to conjugation. Permethrin itself is also subject to oxidation, the cisisomers more so than the trans-isomers because the former is more slowly hy droly sed.

Permethrin is stable as a solid but it is readily hydrolysed in solution under alkaline conditions; it is most stable at pH 4. It is relatively resistant to photodegradation in the context of field use but it undergoes facile photoisomerism (Holmstead et al., 1978). It can be degraded under laboratory conditions affording DCVA (2) and 3-phenoxybenzyl alcohol (3PBAlc, 3). Under appropriate conditions, trans-permethrin affords 29% trans-DCVA and 13% cis-DCVA. The mechanisms of these reactions have been reviewed in detail by Ruzo (1982). Permethrin is resistant to photo-oxidation; other reactions, such as dechlorination, are of minor importance. The degradation products are shown in Scheme 1.