Natural material is found in wintergreen oil, oil of wintergreen, birch oil, green tea seed oil, clove oil, Quercetin tree oil, tuberose oil, small when medicated oil, tea oil, ylang ylang oil and cherry, apple, strawberry fruit juice. It is colorless or pale yellow, red or light yellow transparent oily liquid. A strong aroma of wintergreen oil. Relative molecular mass of 152.16. The relative density of 1.1738. Melting point-8.6 ℃. Boiling point 223.3 ℃. A flash point of 96 ℃. The refractive index of 1.5360. It is insoluble in water, soluble in alcohol, ether, acetic acid and other common organic solvents. It is easy to change when exposed in air . Rat oral LD50887mg/kg.
Salicylic acid and methanol are heated to prepare it in the presence of sulfuric acid . Or it is made of stone STSP plant holly leaf through distillation.
Methyl salicylate can be used in the formulation of flavors, mainly for the deployment of ylang ylang, tuberose, chypre, acacia, fougere, orchids. But the most common use is perfuming toothpaste. IFRA has no restrictions. Methyl salicylate is recognized as GRAS by FEMA, FEMA number 2745, the European Council includes methyl salicylate in health artificial flavorants table which can be used in food without harm to human , the maximum amount is 8400mg/kg, ADI value is 0.5mg/kg.
Methyl salicylate can be used for food flavor formula, is a food flavor within China's GB2760-1996 provisions of the temporary use , ADI value of 0 to 0.5, is commonly used in the deployment of strawberry, vanilla, grapes and other fruit-flavor flavor for food and beer, but also flavor fructose, soft drinks.Methyl salicylate is also used as preservatives, pesticides, polishes, inks, paints, polyester dye carriers in industrial fields

Methyl salicylate ointment is a common dermatology drug with analgesic, anti-inflammatory, bactericidal effect. Because it can induce local irritation, it is rarely orally used.When spread in the skin,it is easily absorbed. Its liniments, ointments can be used for acute rheumatoid arthritis, low back pain and muscle pain, also itching and flavoring agents, flavoring agents, preservatives.

Appropriately use it as modifiers for some floral types , such as ylang ylang, magnolia, acacia, shy flower, tuberose, gardenia, bloom, sweet clover grass.It is mainly used for medicine and hygiene products such as toothpaste, tooth powder, mouthwash, talcum powder, carminative oil. Methyl salicylate can also be used for industrial products such as glue, glue paper, card paste, paste. It can also be used for food flavor,such as strawberries, grapes, walnuts, spearmint, spicy flavor as a special green gas.
Methyl salicylate is used as high-temperature heat carrier in dyeing industry .
The product has similar-Pyrola odor ,when used as a spice, it is often used as flavoring agent for pharmaceutical drugs and the pigmentum.It also has applications in blending spices, such as Quercetin trees in general flavors. Methyl salicylate is also used as solvents and intermediates for the manufacture of pesticides, fungicides, perfumes, paints, cosmetics, ink and dye fibers such help. Methyl salicylate reacts with ammonia to make salicylamide which is used for production of antipyretic analgesics salicylaldehyde ethyl amine ,and salicylamide itself is an anti-inflammatory drug. Methyl salicylate can be obtained by acetylation using acetylsalicylic acid methyl ester (C10H10O4, [580-02-9]). Add methyl salicylate and acetic anhydride into pot ,put sulfuric acid under stirring, the reaction temperature does not exceed 60 ℃ for about 1h, the reaction is completed, the reaction is poured into ice water and precipitated crystals are filtered, washed, dried, and acetylsalicylic acid methyl ester is obtained. Acetylsalicylic acid can be prepared by cyclization to get 4-hydroxy coumarin. Methyl salicylate is used as a pharmaceutical for external application agent.
Perfumes and suntan lotion ultraviolet absorber.

Methyl salicylate is widespread in nature, and it is a main ingredient of wintergreen, small medicated oil . Alsoit is present in essential oils of the tuberose, Quercetin tree, ylang ylang, cloves, tea. Salicylic acid and methanol are used to make it in the presence of sulfuric acid through esterification. Salicylic acid is dissolved in methanol, add sulfuric acid, heat with stirring, the reaction time is 3h,90-100℃, cool to below 30 ℃,take oil ,wash with sodium carbonate solution to pH8 above, and then wash 1 time with water. Vacuum distillation, collect 95-110 ℃ (1.33-2.0kPa) distillate, obtain methyl salicylate. The yield is over 80%. General industrial methyl salicylate content is 99.5%. Material consumption fixed: Acid 950kg/t, methanol 400kg/t.

Methyl salicylate (oil of wintergreen or wintergreen oil) is an organic ester that is naturally produced by many species of plants. Some of the plants which produce it are called wintergreens, hence the common name. This compound is used as a fragrance. It is also found in liniments (rubbing ointments).

Methyl Salicylate is the main component of wintergreen oil and occurs in small quantities in other essential oils and fruits. It is a colorless liquid with a sweet, phenolic odor.

Methyl salicylate has a characteristic wintergreen-like odor. May be prepared by extraction from natural sources; or by esterification of salicylic acid with methanol.

Wintergreen is an evergreen shrub with slender, creeping stems, assurgent, flowering branches with toothed leaves clustered at the top, white, bell-shaped flowers blossoming July to August, followed by red berries (checkerberries). The plant grows extensively in the woods of Canada and the United States (Pennsylvania). The leaves are harvested between June and September. Wintergreen has an aromatic odor and flavor similar to methyl salicylate.

Numerous plants produce methyl salicylate in very small amounts. Some plants, such as the following, produce more:
Some species of the genus Gaultheria in the family Ericaceae, including Gaultheria procumbens, the wintergreen or eastern teaberry;
Some species of the genus Betula in the family Betulaceae, particularly those in the subgenus Betulenta such as B. lenta, the black birch;
All species of the genus Spiraea in the family Rosaceae, also called the meadowsweets.
This compound is produced most likely as an anti-herbivore defense. If the plant is infected with herbivorous insects, the release of methyl salicylate may function as an aid in the recruitment of beneficial insects to kill the herbivorous insects.Aside from its toxicity, methyl salicylate may also be used by plants as a pheromone to warn other plants of pathogens such as tobacco mosaic virus.

Methyl salicylate occurs in the leaves ofGaultheria procumbens L. and in the barkof Betulaceae. It is produced by esterificationof salicylic acid with methanol. It is used inperfumery and as a flavoring agent.

In high concentrations as a rubefacient in deep heating liniments (such as Bengay) to treat joint and muscular pain. Randomised double blind trial reviews report evidence of its effectiveness that is weak, but stronger for acute pain than chronic pain, and that effectiveness may be due entirely to counter-irritation. However, in the body it metabolizes into salicylates, including salicylic acid, a known NSAID.
In low concentrations as a flavoring agent (no more than 0.04%; it is toxic).
providing fragrance to various products and as an odor-masking agent for some organophosphate pesticides. If used excessively, it can cause stomach and kidney problems.
Attracting male orchid bees, who apparently gather the chemical to synthesize pheromones; it is commonly used as bait to attract and collect these bees for study.
Clear plant or animal tissue samples of color, and as such is useful for microscopy and immunohistochemistry when excess pigments obscure structures or block light in the tissue being examined. This clearing generally only takes a few minutes, but the tissue must first be dehydrated in alcohol.
A mint flavoring in some kinds of chewing gum and candy, as an alternative to the more common peppermint and spearmint oils. It can also be found as a flavoring of root beer. It is also a potentially entertaining source of tri boluminescence ; when mixed with sugar and dried, it gains the tendency to build up electrical charge when crushed or rubbed. This effect can be observed by crushing wintergreen Life Savers candy in a dark room.

Methyl salicylate is used in high concentrations as a rubefacient in deep heating liniments (such as Bengay) to treat joint and muscular pain. Randomised double blind trial reviews report evidence of its effectiveness that is weak, but stronger for acute pain than chronic pain, and that effectiveness may be due entirely to counter-irritation. However, in the body it metabolizes into salicylates, including salicylic acid, a known NSAID.
It is used in low concentrations as a flavoring agent (no more than 0.04 %; it is toxic). It is also used to provide fragrance to various products and as an odor-masking agent for some organophosphate pesticides . If used excessively, it can cause stomach and kidney problems.
Methyl salicylate is among the compounds that attract male orchid bees, who apparently gather the chemical to synthesize pheromones; it is commonly used as bait to attract and collect these bees for study.

ChEBI: A benzoate ester that is the methyl ester of salicylic acid.

Methyl salicylate can be produced by esterifying salicylic acid with methanol. Commercial methyl salicylate is now synthesized, but in the past, it was commonly distilled from the twigs of Betula lenta (sweet birch) and Gaultheria procumbens (eastern teaberry or winter green). 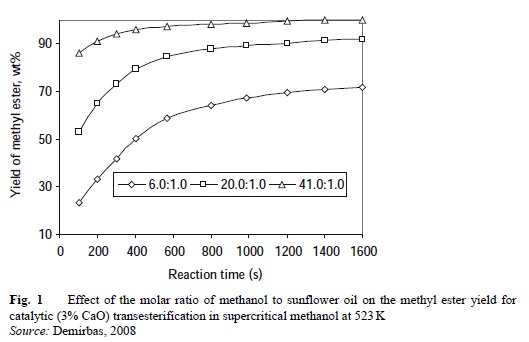 Figure 1 shows the effect of the molar ratio of methanol to sunflower oil on the methyl ester yield for catalytic (3% CaO) transesterification in supercritical methanol at 523 K.

Colorless yellowish or reddish liquid with odor of wintergreen.

Methyl Salicylate is an ester. Esters react with acids to liberate heat along with alcohols and acids. Strong oxidizing acids may cause a vigorous reaction that is sufficiently exothermic to ignite the reaction products. Heat is also generated by the interaction of esters with caustic solutions. Flammable hydrogen is generated by mixing esters with alkali metals and hydrides. Birch-Me is incompatible with oxidizers. Birch-Me is also incompatible with strong bases. Birch-Me may react with iron salts.

Toxic by ingestion; use in foods restrictedby FDA, lethal dose 30 cc in adults, 10 cc in chil-dren.

Methyl salicylate is a highly toxic compound.The toxic symptoms in humans include nausea, vomiting, gastritis, diarrhea, respiratorystimulation, labored breathing, pulmonaryedema, convulsions, and coma. Ingestion of15 to 25 mL of this compound may befatal to humans. Application of the liquidon the skin and eyes produced severe irrita tion in rabbits. Oral, subcutaneous, or der mal administration of methyl salicylate intest animals produced specific developmen tal abnormalities affecting the eyes, ears, andcentral nervous system
Toxicity of this compound is relativelymore severe in humans than in many com mon laboratory animals. The oral LD50 values in test animals were within the range800–1300 mg/kg.

This anti-inflammatory agent is found in a wide number of ointments and can induce allergic contact dermatitis.

In pure form, methyl salicylate is toxic, especially when taken internally. A single teaspoon (5ml) of methyl salicylate contains 7g of salicylate, which is equivalent to more than twenty- three 300 mg aspirin tablets. The lowest published lethal dose is 101 mg / kg body weight in adult humans , (or 7.07 grams for a 70 - kg adult). It has proven fatal to small children in doses as small as 4 ml.[6] A seventeen-year- old cross - country runner at Notre Dame Academy on Staten Island, died in April 2007, after her body absorbed methyl salicylate through excessive use of topical muscle-pain relief products.
Most instances of human toxicity due to methyl salicylate are a result of over-application of topical analgesics, especially involving children. Some people have intentionally ingested large amounts of oil of wintergreen. Salicylate, the major metabolite of methyl salicylate, may be quantitated in blood, plasma or serum to confirm a diagnosis of poisoning in hospitalized patients or to assist in an autopsy.

Available data suggest that methyl salicylate is not carcinogenic.