Magnesium sulfate is an inorganic salt (chemical compound) containing magnesium, sulfur and oxygen, with the formula MgSO4. It is strongly hygroscopic and often encountered as the heptahydrate sulfate mineral epsomite (MgSO4•7H2O), commonly called Epsom salt. And the monohydrate, MgSO4•H2O, is found as the mineral kieserite. 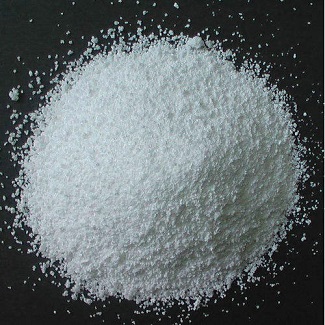 Magnesium sulfate (MgS04) is a colorless crystal with a bitter, saline taste. It is soluble in glycerol and used in fireproofing, textile processes, ceramics, cosmetics, and fertilizers.

Magnesium Sulfate is found widely in nature as either a double salt or as a hydrate, colorless crystals,very soluble in water, soluble in glycerol, sparingly soluble in alcohol.

In their hydrated form, these salts have a pH of 6.0 (5.5 to 6.5) in solution. These magnesium sulfates are white crystalline solids. Their densities are: 2.66 g/cm3 (anhydrous); 2.445 g/cm3 (monohydrate); 1.68 g/cm3 (heptahydrate). Solubilities in water are: anhydrous＝ 26.9 g/100 ml (0°C); monohydrate＝ 25.5 g/100 ml (20°C); heptahydrate＝71 g/100 ml (20°C). Magnesium sulfate is found in nature in many salt deposits and mineral waters, occurring as hydrates or double salts. The heptahydrate or Epsom salt was discovered in 1695, found inthemineralwater at Epsom. Kieserite and epsomite are the two most important minerals. Other than these and the above hydrates, magnesium sulfate is also found in several other minerals, including langbeinite, leonite,vanthoffite,bloedite,kainite,polyhalite,

In agriculture and gardening, magnesium sulfate is used to correct magnesium deficiency in soil, since magnesium is an essential element in the chlorophyll molecule. It is most commonly applied to potted plants, or to magnesium-hungry crops, such as potatoes, tomatoes, peppers, and roses. The advantage of magnesium sulfate over other magnesium compounds (such as dolomitic limestone) is its high solubility. MgSO4 has been used in organic synthesis to remove water from nonaqueous solutions before the organic reaction is started. Since it is insoluble in most organic solvents, its addition forms hydrates that can be easily removed.
Epsom salt is also used to prepare footbaths, intended to soothe sore feet. The reason for the inclusion of the salt is partially cosmetic. However, magnesium sulfate can also be absorbed into the skin, reducing inflammation. It is also sometimes found in bottled mineral water, and accordingly is sometimes listed in the contents thereof. Magnesium sulfate heptahydrate is also used to maintain the magnesium concentration in marine aquaria which contain large amounts of stony corals as it is slowly depleted in their calcification process, precipitation into calcium carbonate. Oral Epsom salt is used as a saline laxative as well as for replacement therapy in “hypomagnesaemia” (lack of Mg2+) in animals and humans. Magnesium sulfate paste has been used as an agent for dehydrating (drawing) boils, carbuncles or abscesses. Magnesium sulfate solution has also been shown to be an effective aid in the fight against blemishes and acne when applied directly to problematic areas. Magnesium sulfate, when used through soaking, can soothe muscle pains and help improve rough patches in the skin. Soaking in a warm bath containing Epsom salt (magnesium sulfate) can be beneficial to soothe and relieve herpes outbreak symptoms, such as itching and lesions relating to genital herpes or shingles.

Magnesium sulfate is used widely in several industries including fertilizer, cement, textile, chemicals, and medicine. In the cement industry, it is used in manufacturing oxysulfate cement. In medicine, it is an analgesic and cathartic. An important application of anhydrous magnesium sulfate in the laboratory involves drying organic solvents required for syntheses and GC analysis.
In the textile industry, magnesium sulfate is used in finishing composition for dressing cotton; for weighting and sizing silk; as a mordant for fixing basic dyestuffs on wool; and in fireproofing fabrics. It also is a component of certain types of electrolytic plating baths; of various photographic solutions; of cosmetic lotions. It is a catalyst carrier; a dietary supplement in cattle feed; a coagulant for rubber and plastic; and is used in making citric acid and several magnesium salts, such as magnesium stearate.

Hydrated magnesium sulfate occurs in nature as the minerals kieserite and epsomite. The salt is mined in large scale from these and other naturally occurring minerals. The salt also is prepared in the laboratory by the action of sulfuric acid on magnesium oxide, hydroxide, or carbonate followed by evaporation and crystallization:
MgO + H2SO4 → MgSO4 + H2O
Mg(OH)2 + H2SO4 → MgSO4 + 2H2O
MgCO3 + H2SO4 → MgSO4 + CO2 + H2O
Crystallization at temperatures between 1.8 and 48°C yields heptahydrate, MgSO4•7H2O. Below 1.8°C, a dodecahydrate , MgSO4•12H2O crystallizes out. Above 48°C crystals of lower hydrates form. The anhydrous salt is obtained by heating the heptahydrate at about 500°C in a rotary drum; or dehydrating above 150°C in the presence of sulfuric acid.

ChEBI: A magnesium salt having sulfate as the counterion.

Magnesium sulfate prevents convulsions in preeclampsia and directly uncouples excitation–contraction in myometrial cells through inhibition of cellular action potentials. Furthermore, magnesium sulfate decreases calcium uptake by competing for its binding sites, activating adenylyl cyclase (thereby reducing intracellular calcium), and stimulating calcium-dependent adenosine triphosphatase (ATPase), which promotes calcium uptake by the sarcoplasmic reticulum. Magnesium is filtered by the glomerulus, so patients with low glomerular filtration will have low magnesium clearance. Although the compound does have some cardiac side effects, magnesium sulfate may be preferred over β- adrenergic agents in patients with heart disease, diabetes, hypertension, or hyperthyroidism.

Magnesium sulfate may be effective in terminating refractory ventricular tachyarrhythmias, particularly polymorphic ventricular tachycardia. Digitalis-induced arrhythmias are more likely in the presence of magnesium deficiency. Magnesium sulfate can be administered orally, intramuscularly, or, preferably, intravenously,when a rapid response is intended.The loss of deep tendon reflexes is a sign of overdose.

Magnesium sulphate is a white compound existing both in anhydrous (rhombic) and hydrated crystalline forms. The monohydrate MgSO4·H2O (monoclinic) occurs in nature as kieserite. It is a greyish-white crystalline powder which contains about 16 % magnesium and is used as a fertilizer. It is regarded as a concentrated form of epsom salt, having less water of crystallization. The commonest hydrate is heptahydrate MgSO4·7H2O(also called rhombic or epsom salt) which occurs naturally as the mineral epsomite. It is a white powder with a bitter, saline taste. The salt in the monocliic form loses its structural water at 150°C, while the rhombic form loses water at 200°C.
Magnesium sulphate is used in sizing and freproofng cotton and silk, in tanning leather, in the manufacture of fertilizers, in explosives and matches, in medicines as a laxative, and as a veterinary medicine for the treatment of inflammations and infected wounds.

There is much debate as to the efficacy of magnesium sulfate. For effective inhibition of uterine activity, enough must be given to maintain a blood plasma level of at least 5.5 mEq/L. Even at this level, tocolysis may be hard to achieve.

The side effects of magnesium sulfate administration are dose dependent. As magnesium levels increase, skeletal muscle weakness increases and CNS depression and vascular dilation occur. Magnesium sulfate infusion commonly results in a slight decrease in blood pressure during epidural anesthesia.
Cardiac muscle is not affected to a clinically evident degree when magnesium is administered at therapeutic levels, although magnesium can have profound myocardial effects during a gross overdose.
Magnesium antagonizes the vasoconstrictive effect of α-agonists, so ephedrine and phenylephrine are likely to less effectively increase maternal blood pressure when administered concomitantly with magnesium.
Magnesium is eliminated unchanged by the kidneys. In a patient who is receiving a maintenance infusion of magnesium and who has decreasing urine output, blood levels of magnesium quickly increase, as do related side effects.
Other side effects of magnesium sulfate include the following: (1) Cutaneous vasodilation with flushing (2) Headache and dizziness (3) Nausea (4) Skeletal muscle weakness (5) Depression of deep tendon reflexes (6) Respiratory depression (7) ECG changes

Magnesium sulfate is not for use in patients with heart block or extensive myocardial damage. Use it with caution in patients with impaired renal function, in digitalized patients, and with concomitant use of other central nervous system depressants or neuromuscular blocking agents. Intravenous administration is contraindicated during the 2 hours preceding delivery. Oral administration is contraindicated in patients with abdominal pain, nausea, vomiting, fecal impaction, or intestinal irritation, obstruction, or perforation.