2-Butoxyethanol is a clear, colourless liquid with ether-like smell.2-Butoxyethanol is usually produced by a reaction of ethylene oxide with butyl alcohol, but it may also be made by the reaction of ethylene glycol with dibutyl sulphate. 2-Butoxyethanol is widely used as a solvent in protective surface coatings such as spray lacquers, quick-dry lacquers, enamels, varnishes, and latex paints. It is also used as an ingredient in paint thinners and strippers, varnish removers, agricultural chemicals, herbicides, silicon caulks, cutting oils, and hydraulic fluids and as metal cleaners, fabric dyes and inks, industrial and household cleaners (as a degreaser), and dry-cleaning compounds. It is also used in liquid soaps and in cosmetics. 2-Butoxyethanol acetate has been reported to be present in air, water, and soil as a contaminant and exposure to it occurs during its manufacture and use as an intermediate in the chemical industry, and during the formulation and use of its products in multiple industrial activities. The acetate form of 2-butoxyethanol is 2-butoxyethanol acetate and also known as ethylene glycol monobutyl ether acetate.

Ethylene glycol monobutyl ether is a colorless liquid with a mild, rancid, ether-like odor. It is miscible in alI proportions with many ketones, ethers, alcohols, aromatic paraffin and halogenated hydrocarbons. More specifically, it mixes in all proportions with acetone, benzene, carbon tetrachloride, ethyl ether, n-heptane and water. Because of its excellent solvency, low evaporation rate and high dilution ratios, it is used as a solvent in the manufacture and formulation of lacquers, enamels, inks and varnishes, employing such resins as alkyd, phenolic, nitrocellulose, maleic modified, styrene and epoxy. In lacquers butyl "Cellosolve" imparts a slow evaporation rate, strengthens blush resistance, heightens gloss, improves flow-out and helps prevent orange peel. Hot spray lacquers usually contain about 10% of "Dowanol" EB based on the solvent-diluent weight. 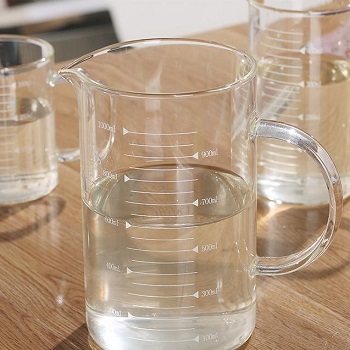 2-Butoxyethanol is used as a solvent for nitrocellulose, natural and synthetic resins, soluble oils, in surface coatings, spray lacquers, enamels, varnishes, and latex paints, as an ingredient in paint thinners, quick-dry lacquers, latex paint, and strippers, varnish removers, and herbicides. It is also used in textile dyeing and printing, in the treatment of leather, in the production of plasticizers, as a stabilizer in metal cleaners and household cleaners, and in hydraulic fl uids, insecticides, herbicides, and rust removers. It is also used as an ingredient in liquid soaps, cosmetics, industrial and household cleaners, dry-cleaning compounds, and as an ingredient in silicon caulks, cutting oils, and hydraulic fluids. 2-Butoxyethanol is a fire hazard when exposed to heat, sparks, or open flames.

Ethylene glycol n-butyl ether (EB) is used widely as a coupling solvent because of its superior coupling efficiency and excellent solvency for resins.

Ethylene glycol monobutyl ether (EGBE) is used as a solvent for nitrocellulose, resins, oil, and grease, and in dry cleaning.

A colorless liquid with a mild, pleasant odor. Less dense than water. Flash point 160°F. Irritates skin and eyes and may be toxic by ingestion. Used as a solvent and to make paints and varnish.

2-Butoxyethanol is sensitive to air and light. Slightly soluble in water.

ETHYLENE GLYCOL N-BUTYL ETHER may react with bases, aluminum and oxidizing materials. 2-Butoxyethanol is liable to form peroxides on exposure to air and light. 2-Butoxyethanol attacks some forms of plastics, rubber and coatings. .

2-Butoxyethanol is present in a variety of consumer products, including cleaning agents and surface coatings, such as paints, lacquers, and varnishes. 2-Butoxyethanol is readily absorbed following inhalation, oral, and dermal exposure. 2-Butoxyethanol is released into air or water by different industrial activities and facilities that manu facture, process, or use the chemical. Exposure to 2-butoxyethanol causes irritating effects to the eyes and skin, but it has not induced skin sensitization in guinea pigs. Information on the human health effects associated with exposure to 2-butoxyethanol is limited. However, case studies of individuals who had attempted suicide by ingest ing 2-butoxyethanol-containing cleaning solutions suffered poisoning with symp toms such as hemoglobinuria, erythropenia, and hypotension, metabolic acidosis, shock, non-cardiogenic pulmonary edema, and albuminuria, hepatic disorders and hematuria.

Combustible material: may burn but does not ignite readily. Containers may explode when heated. Runoff may pollute waterways. Substance may be transported in a molten form.

Biological. Bridié et al. (1979) reported BOD and COD values of 0.71 and 2.20 g/g using filtered effluent from a biological sanitary waste treatment plant. These values were determined using a standard dilution method at 20 °C for a period of 5 d. When a sewage seed was used in a separate screening test, a BOD value of 0.20 g/g was obtained. The ThOD for 2-butoxyethanol is 2.31 g/g.
Chemical/Physical. At an influent concentration of 1,000 mg/L, treatment with GAC resulted in an effluent concentration of 441 mg/L. The adsorbability of the carbon used was 112 mg/g carbon (Guisti et al., 1974).

2-Butoxyethanol should be kept stored in tightly closed, grounded containers in a cool area with adequate ventilation, away from normal work areas and sources of heat and sparks, and electrical equipment. At the storage and handling area, workers should use solvent resistant materials.

Peroxides can be removed by refluxing with anhydrous SnCl2 or by passage under slight pressure through a column of activated alumina. Dry with anhydrous K2CO3 and CaSO4, filter and distil, or reflux with, and distil from NaOH. [Beilstein 1 IV 2380.]

EGBE is destroyed by burning in an incinerator. In the laboratory, small amounts may be disposed of in the sink with a large volume of water.

Occupational workers should use minimal quantities of 2-butoxyethanol in designated areas with adequate ventilation and away from sources of heat or sparks. Whenever pos sible, fi re-resistant containers should be used. Wear appropriate protective equipment to prevent skin and eye contact.