Indium lies in Group 13 (13th vertical column of the periodic table). it shows a wide variety of properties. It is considered to be metal of the 'poor metals' group. 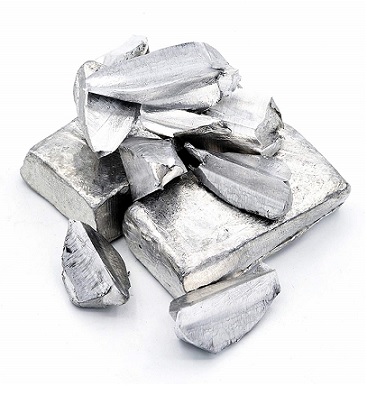 Indium (symbol Ga; CAS# 7440-74-6) is widely used in the electronics industry, its radioisotopes are used for diagnostic imaging in medicine. Though this element is not essential for human nutrition, it is widely distributed in low concentrations in the environment (Smith et al., 1978).
Radioisotopes of indium have been used to label phagocytes and lymphocytes to localize inflammatory lesions (Dudley and Marrer, 1952; Abrams and Murrer, 1993). Despite early optimism, neither element has found wide use as a treatment for malignancies.

Indium is a rare, lustrous silver-white metal with atomic number 49 and In as its atomic symbol. It is widely distributed in the Earth’s crust in minute quantities (0.1 ppm) and is also found in the hydrosphere. Indium belongs to group IIIA in the periodic table. It was found and spectroscopically identified as a minor component in zinc ores and isolated in 1863 by Ferdinand Reich and Theodore Richter. Indium is so named for the indigo blue color that its salts lend to flames. Indium resembles tin in its physical and chemical properties and to some extent in its toxicological properties. It is extremely soft and malleable, with a Brinell test hardness of less than 1 and a Mohs scale hardness of 1.2. In the electromotive series, it appears between iron and tin and does not decompose inwater at boiling temperature. It is stable in air, but when heated, it burns with a nonluminous, blue-red flame yielding indium oxide. The surface of indium remains bright up to its melting point; above this, it forms an oxide film.
Indium is flammable in the form of dust, yielding indium oxide when exposed to heat or flame. Mixtures of indium with sulfur ignite when heated. Indium reacts explosively with dinitrogen tetroxide plus acetonitrile. Indium exhibits a violent reaction with mercury(II) bromide at 350°C. Indium is unaffected by water, is attacked by mineral acids, and is very resistant to alkalies.

Indium is silvery-white and malleable and looks much like aluminum and tin. However,it is softer than lead. Indium metal is so soft that it cannot be “wiped” onto other surfaces aswith a graphite pencil. Because it is noncorrosive and does not oxidize at room temperatures,it can be polished and will hold its shine better than silver. Its melting point is 156.60°C, itsboiling point is 2,075°C, and its density is 7.31 g/cm3.

There are a total of 73 isotopes of indium. All are radioactive with relativelyshort half-lives, except two that are considered stable. Isotope In-113 makes up just4.29% of the total indium found in the Earth’s crust. The isotope In-115, with a half-lifeof 4.41×10-14 years contributes the balance (95.71%) of the element’s existence in theEarth’s crust.

Indium’s name is derived from the Latin word indicum, meaning “indigo,” which is the color of its spectral line when viewed by a spectroscope.

Indium is a rather rare metal. It is the 69th most abundant element, which is about asabundant as silver at 0.05 ppm. Although it is widely spread over the Earth’s crust, it is foundin very small concentrations and always combined with other metal ores. It is never found inits natural metallic state.
Indium is recovered as a by-product of smelting other metal ores such as aluminum,antimony, cadmium, arsenic, and zinc. About 1,000 kg of indium is recovered each year (ora concentration of 1 part indium per 1000 parts of dust) from the flue stacks (chimneys) ofzinc refineries.
Indium is found in metal ores and minerals located in Russia, Japan, Europe, Peru, andCanada, as well as in the western part of the United States.

Indium has one odd characteristic in that in the form of a sheet, like the metal tin, it willemit a shrieking sound when bent rapidly. Indium has some of the characteristics of othermetals near it in the periodic table and may be thought of as an “extension” of the secondseries of the transition elements. Although it is corrosion-resistant at room temperature, it willoxidize at higher temperatures. It is soluble in acids, but not in alkalis or hot water.

Discovered by Reich and Richter, who later isolated the metal. Indium is most frequently associated with zinc materials, and it is from these that most commercial indium is now obtained; however, it is also found in iron, lead, and copper ores. Until 1924, a gram or so constituted the world’s supply of this element in isolated form. It is probably about as abundant as silver. About 4 million troy ounces ofindium are now produced annually in the Free World. Canada is presently producing more than 1,000,000 troy ounces annually. The present cost of indium is about $2 to $10/g, depending on quantity and purity. It is available in ultrapure form. Indium is a very soft, silvery-white metal with a brilliant luster. The pure metal gives a high-pitched “cry” when bent. It wets glass, as does gallium. Indium has found application in making low-melting alloys; an alloy of 24% indium–76% gallium is liquid at room temperature. Indium is used in making bearing alloys, germanium transistors, rectifiers, thermistors, liquid crystal displays, high definition television, batteries, and photoconductors. It can be plated onto metal and evaporated onto glass, forming a mirror as good as that made with silver but with more resistance to atmospheric corrosion. There is evidence that indium has a low order of toxicity; however, care should be taken until further information is available. Seventy isotopes and isomers are now recognized (more than any other element). Natural indium contains two isotopes. One is stable. The other, 115In, comprising 95.71% of natural indium is slightly radioactive with a very long half-life.

In bearing alloys; as a thin film on moving surfaces made from other metals. In dental alloys. In semiconductor research. In nuclear reactor control rods (in the form of an Ag-In-Cd alloy).

Indium element is used in the synthesis of therapeutic particles containing metal ions; characterized by the use of unique ligand sets capable of making the metal ion complex soluble in biolgical medi a to induce selective toxicity in diseased cells.

Indium’s low melting point is the major factor in determining its commercial importance.This factor makes it ideal for soldering the lead wires to semiconductors and transistors in theelectronics industry. The compounds of indium arsenide, indium antimonide, and indiumphosphide are used to construct semiconductors that have specialized functions in the electronicsindustry.
Another main use is as an alloy with other metals when it will lower the melting point ofthe metals with which it is alloyed. Alloys of indium and silver and indium and lead have theability to carry electricity better than pure silver and lead.
Indium is used as a coating for steel bearings to increase their resistance to wear. It alsohas the ability to “wet” glass, which makes it an excellent mirror surface that lasts longer than mercury mirrors. Sheets of indium foil are inserted into nuclear reactors to help control thenuclear fission reaction by absorbing some of the neutrons.

ChEBI: A metallic element first identified and named from the brilliant indigo (Latin indicum) blue line in its flame spectrum.

Mineral sources are most commonly dark sphalerite (ZnS), marmatite, and christophite (FeS:ZnS). Indium also occurs in small quantities in tin ores, siderite, and manganese and tungsten ores.Gallium is often associated with indium in zinc and tin ores. Many sulfide ores of copper, iron, lead, cobalt, and bismuth contain small quantities of indium. Zinc smelter flue dusts, in some cases, contain more than 1% indium, and are the largest commercial source of the metal. Other commercial sources are plant residues and dross from the refining of zinc, lead, and cadmium. Indium is recovered from zinc processing residues by acid leaching followed by chemical separation from the accompanying elemental impurities such as zinc, cadmium, aluminum, arsenic, and antimony. Final purification by aqueous electrolysis of the salts at a controlled potential yields a product of 99.9% purity. Canada and Peru supply the greatest amounts of unwrought waste and scrap. Next in order are Japan, Germany, and the United Kingdom. The pattern of indium usage, and potential industrial hazard, is 30% in solders, low-melting alloys, and coatings; 30% in instrument applications and holding devices; 18% in electronic components; 6% in nuclear reactor controls; and 16% in research and other uses.

Indium is a non-combustible solid in bulk form but is flammable in the form of a dust. Reacts with strong oxidizing agents. Reacts explosively with dinitrogen tetraoxide dissolved in acetonitrile. Reacts violently with mercury(II)bromide at 350°C. Mixtures with sulfur ignite when heated.

Metal and its compounds are toxic by inhalation.

Indium metal dust, particles, and vapors are toxic if ingested or inhaled, as are most of thecompounds of indium. This requires the semiconductor and electronics industries that useindium compounds to provide protection for their workers.

Indium (symbol In) is a silvery-white metal with a bluish hue, whiter than tin.It is very ductile and does not work-harden, because its recrystallization point is below normal room temperature, and it softens during rolling. The metal is not easily oxidized, but above its melting point, 157 C, it oxidizes and burns with a violet flame.
Indium is now obtained as a by-product from a variety of ores. Because of its bright color, light reflectance, and corrosion resistance, it is valued as a plating metal, especially for reflectors. It is softer than lead, but a hard surface is obtained by heating the plated part to diffuse the indium into the base metal. It has high adhesion to other metals. When added to chromium plating baths it reduces brittleness of the chromium.
The three largest uses of indium are in semiconductordevices, bearings, and low meltingpointalloys.

Indium has not been tested for its ability to cause cancer in animals. However, the probable carcinogenic properties of indium are linked to alterations in the synthesis and maintenance of enzyme systems that metabolize organic carcinogens. A compromise in the ability of these metabolic systems would lead to altered cellular responses to organic carcinogenic substances.

Before use, the metal surface is cleaned with dilute HNO3, followed by thorough washing with water and an alcohol rinse. [D.nges in Handbook of Preparative Inorganic Chemistry (Ed. Brauer) Academic Press Vol I p 856 1963.]