Agar is a dried, hydrophilic, colloidal polysaccharide complex extracted from the agarocytes of algae of the Rhodophyceae. The structure is believed to be a complex range of polysaccharide chains having alternating a-(1!3) and b-(1!4) linkages. There are three extremes of structure noted: namely neutral agarose; pyruvated agarose having little sulfation; and a sulfated galactan. Agar can be separated into a natural gelling fraction, agarose, and a sulfated nongelling fraction, agaropectin. 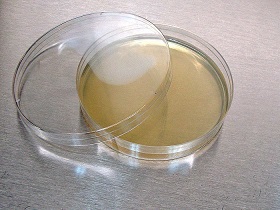 Agar is produced by some red algae species (Rhodophyceae), especially Gelidium and Gracilaria. Agar contains two polysaccharides - agarose (agaran) and agaropectin. Agarose consists mainly of D-galactose and the 3,6-anhydro form of L-galactose, with small amounts of D-xylose. Some of the D-galactose units are methylated at C-6. The polymer contains alternatingsegments of α(1~3) linked D-galactose units and β (1~4) linked 3,6-anhydro-L-galactose. The main chains of agaropectin are similar, but contain D-glucuronic acid and small amounts of other sugars, including sulphate esters. Agar is not attacked by microorganisms and its strong gel-forming properties make it an ideal matrix for microbial cultures.

Agar occurs as transparent, odorless, tasteless strips or as a coarse or fine powder. It may be weak yellowish-orange, yellowish-gray to pale-yellow colored, or colorless. Agar is tough when damp, brittle when dry.

A dried hydrophilic, colloidal polygalactoside derived from the entire plant (minus the roots) of Gelidium cartilagineum (L.) Gaillon or Gracilaria confervoides (L.) Greville. It is commercially available in bundles consisting of thin, membranous agglutinated strips or in cut, flaked granulated or powdered form. Although agar was discovered in Japan in 1658, it was introduced to Europe and the United States from China in the nineteenth century, where it was initially used as a gelatin substitute in the making of desserts. It soon became widely used as a solid bacteriological culture medium after its use by Robert Koch in his famous experiments. Its major uses in the food industry of today are in bakery products, confectionary, dairy products and canned meat and fish. It is also used in microbiology, dentistry and medicine.
The Gelidium species amansii and cartilageneum are the major sources of agar, although many species of Rhodophyceae are used. The weeds (agarophytes) used in the commercial product of agar grow from the tide line out to depths of 120 ft, and are harvested by waders along the shore at low tide, raked from small boats or picked by divers. Japan is the largest producer of agar. Because agar is soluble in hot water but relatively insoluble in cold water, it is extracted by boiling the agarophyte in water, filtering, cooling to form a gel, cutting into pieces and frozen, then thawing to free the agar from salts and other impurities that are soluble in cold water. The wet agar is repeatedly washed with cold water and finally dried. American and Japanese agar are graded according to published specifications. The high-quality American agar is divided into bacteriological, medicinal and dental grades, and the Japanese agar, into three grades and two subgrades. It is odorless or with a slight characteristic odor and mucilaginous taste. The structure of agar is not completely known. Chemically, agar is believed to be composed of 3,6-anhydro-L-galactose and D-galactopyranose residues in varying proportions.

Agar is found in several species of red marine algae in oceans around the world.

Substitute for gelatin, isinglass, etc. in making emulsions including photographic, gels in cosmetics, and as thickening agent in foods especially. confectionaries and dairy products; in meat canning; in production of medicinal encapsulations and ointments; as dental impression mold base; as corrosion inhibitor; sizing for silks and paper; in the dyeing and printing of fabrics and textiles; in adhesives. In nutrient media for bacterial cultures.

Agar is a gum obtained from red seaweeds of the genera gelidium, gracilaria, and eucheuma, class rhodophyceae. it is a mixture of the polysaccharides agarose and agaropectin. it is insoluble in cold water, slowly soluble in hot water, and soluble in boiling water, forming a gel upon cooling. the gels are characterized as being tough and brittle, setting at 32–40°c, and melting at 95°c. a rigid, tough gel can be formed at 0.5%. agar mainly functions in gel for- mation because of its range between melting and setting tempera- tures, being used in piping gels, glazes, icings, dental impression material, and microbiological plating. typical use levels are 0.1–2.0%.

agar: An extract of certain species ofred seaweeds that is used as a gellingagent in microbiological culturemedia, foodstuffs, medicines, andcosmetic creams and jellies. Nutrientagar consists of a broth made frombeef extract or blood that is gelledwith agar and used for the cultivationof bacteria, fungi, and somealgae.

Agar is obtained by freeze-drying a mucilage derived from Gelidium amansii Lamouroux, other species of the same family (Gelidiaceae), or other red algae (Rhodophyta).

Flammable and/or toxic gases are generated by the combination of alcohols with alkali metals, nitrides, and strong reducing agents. They react with oxoacids and carboxylic acids to form esters plus water. Oxidizing agents convert them to aldehydes or ketones. They exhibit both weak acid and weak base behavior.

Flash point data for Agar are not available. Agar is probably combustible.

Also known as agar, the word agar-agar is of Malaysian origin. It refers to the red seaweeds belonging to genus Eucheuma, used widely in Malaysia for making a gelatinous material.
Agar is a mucilage synthesized by red algae and stored along with cellulose in the cell wall. It is a dry, amorphous and gelatine-like extract, devoid of any nonnitrogenous material from Gelidium and other agarophytes. The extract is the sulphuric acid ester of a linear galactan, soluble in hot water but insoluble in cold water. A 1.5% agar solution can form a firm gel at around 35℃ (with a melting point above 85℃), the gel being a mixture of a partially methylated neutral polysaccharide (agarose) and sulphuric acid ester (agaropectin) of a linear galactan. The gel is made under steam pressure or by boiling, and its agar content depends on the algal species, season and extraction method.
Agar is manufactured from various algae or seaweeds called agarophytes, whereas the term agaroidophyte denotes the red seaweeds that yield a substance chemically akin to an agar-like substance, but with different viscosity and gelling properties. The important agarophytes used for extraction of agar are Acanthopeltis japonica, Ahnfeltia plicata and species under the genera Gelidium, Gracilaria and Rerocladia. Other red algae are Comphylaephora, Eucheuma, Hypnea, Gigartina and Furcellaria.
Different countries use different red algae for making agar. For example, Suhria, Gelidium, Pterocladia, and Ahnfeltia are used in South Africa, the US, New Zealand and Russia respectively. Often, the alga carries the name of that country where it is used. For example, Ceylon agar (or Ceylon moss) refers to the dried red seaweed Gracilaria lichenoides found mainly in Sri Lanka, whereas the same alga found along the Indian coast bordering the Indian Ocean is called Bengal isinglass. Gracilaria verrucosa in China is known as Chinese moss, whereas in Japan, agar-agar made from Gelidium sp. is called Kanten, which means cold sky, because it was made in cold winter days or high up in the mountains.
Agar is used for many purposes - as a solidifying agent in the culture medium used for multiplication of beneficial bacteria like Azotobacter and Azospirillum during biofertilizer production, for algal growth, for canning tuna fish (in Japan), in the sizing of fabrics, etc. Various grades of agar are used as coating material for waterproofing paper and cloth, as a glue, as a cleaning medium for liquids, as a lubricant, in hot drawing of tungsten wire for electrical lamps (for which a suspension of powdered graphite in agar gel is used), for making photographic plates and films, for imparting gloss and stiffness to leather, and as an adhesive in the manufacture of plywood. Agar is even used in food products, for thickening soups, sauces, ice creams, malted milks, jellies, candies and pastries. Due to its high temperature tolerance, agar is fovored in food products. It substitutes pectin for making jellies, jams, marmalades, etc. and serves as a clarifying agent in the manufacture of wine, beer and coffee.

Agar is widely used in food applications as a stabilizing agent. In pharmaceutical applications, agar is used in a handful of oral tablet and topical formulations. It has also been investigated in a number of experimental pharmaceutical applications including as a sustained-release agent in gels, beads, microspheres, and tablets.It has also been reported to work as a disintegrant in tablets.
Agar has been used in a floating controlled-release tablet; the buoyancy in part being attributed to air entrapped in the agar gel network.It can be used as a viscosity-increasing agent in aqueous systems. Agar can also be used as a base for nonmelting, and nondisintegrating suppositories.Agar has an application as a suspending agent in pharmaceutical suspensions.

Mildly toxic by ingestion. When heated to decomposition it emits acrid smoke and fumes.

Agar solutions are most stable at pH 4–10.
Agar should be stored in a cool, dry, place. Containers of this material may be hazardous when empty since they retain product residues (dust, solids).

Agar is incompatible with strong oxidizing agents. Agar is dehydrated and precipitated from solution by ethanol (95%). Tannic acid causes precipitation; electrolytes cause partial dehydration and decrease in viscosity of sols.