Tetrahydrofuran, the abbreviation of THF, is a heterocyclic organic compound. It belongs to ethers and is the fully hydrogenated product of the aromatic compound furan. It can be used as an aprotic solvent with moderate polarity in chemical reaction and solvent extraction. Tetrahydrofuran is a colorless, low viscosity liquid with a similar smell as ether.

Tetrahydrofuran (THF)  is a colorless, volatile liquid with an ethereal or acetonelike smell and is miscible in water and most organic solvents.It is highly flammable and may thermally decompose to carbon monoxide and carbon dioxide. Prolonged storage in contact with air and in the absence of an antioxidant may cause THF to decompose into explosive peroxides. 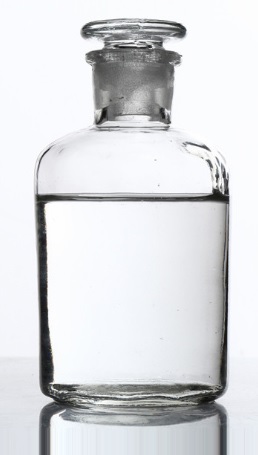 Tetrahydrofuran is used in the manufacture of polymers as well as agricultural, pharmaceutical, and commodity chemicals. Manufacturing activities commonly occur in closed systems or under engineering controls that limit worker exposure and release to the environment. THF is also used as a solvent (e.g., pipe fitting) that may result in more significant exposures when used in confined spaces without sufficient ventilation. Although THF is naturally present in coffee aroma, floured chickpeas, and cooked chicken, natural exposures are not anticipated to pose a significant hazard.

Tetrahydrofuran (THF) is an industrial solvent widely recognized for its unique combination of useful properties. DuPont THF is better than 99.9% pure with a small (0.025-0.040 wt % ) amount of butylated hydroxytoluene (BHT, 4-methyl-2,6-di-tertbutyl phenol) added as an antioxidant. Tetrahydrofuran is a cycloaliphatic ether and is not "photochemically reactive" as defined in Section k of Los Angeles County's Rule 66 (equivalent to Rule 442 of the Southern California Air Pollution Control District). THF has an ethereal odor. The Odor Threshold is listed @ 3.8 (3M), 20-50ppm, and 31ppm. It is also a common laboratory reagent and an intermediate in chemical syntheses of consumer and industrial products such as nutritionals, pharmaceuticals, and insecticides (HSDB, 2011).

Tetrahydrofuran is a clear, colourless liquid with a strong ether-like odour. Odor threshold concentration is 2 ppm (quoted, Amoore and Hautala, 1983). It is highly flammable. Contact of tetrahydrofuran with strong oxidising agents may cause explosions. Tetrahydrofuran may polymerise in the presence of cationic initiators. Contact with lithium–aluminium hydride, with other lithium–aluminium alloys, or with sodium or potassium hydroxide can be hazardous.

Butylene oxide is used as a fumigant and inadmixture with other compounds. It is usedto stabilize fuel with respect to color andsludge formation.

Tetrahydrofuran is used as a solvent forresins, vinyls, and high polymers; as a Grignardreaction medium for organometallic,and metal hydride reactions; and in the synthesisof succinic acid and butyrolactone.

Solvent for high polymers, especially polyvinyl chloride. As reaction medium for Grignard and metal hydride reactions. In the synthesis of butyrolactone, succinic acid, 1,4-butanediol diacetate. Solvent in histological techniques. May be used under Federal Food, Drug & Cosmetic Act for fabrication of articles for packaging, transporting, or storing of foods if residual amount does not exceed 1.5% of the film: Fed. Regist. 27, 3919 (Apr. 25, 1962).

Tetrahydrofuran is used primarily (80%) to make polytetramethylene ether glycol, the base polymer used primarily in the manufacture of elastomeric fibers (e.g., spandex) as well as polyurethane and polyester elastomers (e.g., artificial leather, skateboard wheels). The remainder (20%) is used in solvent applications (e.g., pipe cements, adhesives, printing inks, and magnetic tape) and as a reaction solvent in chemical and pharmaceutical syntheses.

ChEBI: A cyclic ether that is butane in which one hydrogen from each methyl group is substituted by an oxygen.

A clear colorless liquid with an ethereal odor. Less dense than water. Flash point 6°F. Vapors are heavier than air.

The toxicity of tetrahydrofuran is of loworder in animals and humans. The targetorgans are primarily the respiratory systemand central nervous system. It is an irritantto the upper respiratory tract and eyes.At high concentrations it exhibits anestheticproperties similar to those of many loweraliphatic ethers. Exposure to concentrationsabove 25,000 ppm in air can cause anesthesiain humans. Other effects noted were strongrespiratory stimulation and fall in bloodpressure (ACGIH 1986). Kidney and liverinjuries occurred in experimental animalsexposed to 3000 ppm for 8 hours/day for20 days (Lehman and Flury 1943). Inhalationof high concentrations of vapors or ingestionof the liquid also causes nausea, vomiting,and severe headache. The acute oraltoxicity is low; the LD50 value in rats is in therange of 2800 mg/kg. The inhalation LC50value in rats is 21,000 ppm/3 h.

THF is extremely flammable (NFPA rating = 3), and its vapor can travel a considerable distance to an ignition source and "flash back." A 5% solution of THF in water is flammable. THF vapor forms explosive mixtures with air at concentrations of 2 to 12% (by volume). Carbon dioxide or dry chemical extinguishers should be used for THF fires.
THF can form shock- and heat-sensitive peroxides, which may explode on concentration by distillation or evaporation. Always test samples of THF for the presence of peroxides before distilling or allowing to evaporate. THF should never be distilled to dryness.

Tetrahydrofuran (THF), the saturated derivative of furan, when used as a solvent for high molecular weight polyvinyl chloride (PVC), vinyl chloride copolymers, and polyvinylidene chloride copolymers at ambient temperatures yields solutions of high solids content. Blends of THF and methyl ethyl ketone are often used for increased solvency in certain polymer compositions. Applications for THF polymer solutions include PVC top coatings of automotive upholstery, audio tape coatings of polyurethane/metal oxides on polyester tape, polyurethane coatings for fabric finishes, water-vapor barrier film coatings of PVC, and polyvinylidene chloride copolymers onto cellophane film. Tetrahydrofuran is an excellent solvent for many inks used for printing on PVC film and on PVC plastic articles. Polyvinyl chloride pipe welding cements are made by dissolving the resin in THF solvent. Other adhesive applications include cements for leather, plastic sheeting, and for molded plastic assemblies. Other uses of THF are as a chemical intermediate and as a complexing solvent for various inorganic, organometallic, and organic compounds. These THF complexes are important as Grignard reagents, catalysts for organic reactions, and in stereo-specific polymerizations. Tetrahydrofuran is the solvent of choice in many pharmaceutical reactions and applications. The excellent solvency of THF makes this solvent ideal for solvent cleaning of polymer manufacturing and processing equipment.

THF should be used only in areas free of ignition sources, and quantities greater than 1 liter should be stored in tightly sealed metal containers in areas separate from oxidizers. Containers of THF should be dated when opened and tested periodically for the presence of peroxides.

It is obtained commercially by catalytic hydrogenation of furan from pentosan-containing agricultural residues. It was purified by refluxing with, and distilling from LiAlH4 which removes water, peroxides, inhibitors and other impurities [Jaeger et al. J Am Chem Soc 101 717 1979]. Peroxides can also be removed by passage through a column of activated alumina, or by treatment with aqueous ferrous sulfate and sodium bisulfate, followed by solid KOH. In both cases, the solvent is then dried and fractionally distilled from sodium. Lithium wire or vigorously stirred molten potassium have also been used for this purpose. CaH2 has also been used as a drying agent. Several methods are available for obtaining the solvent almost anhydrous. Ware [J Am Chem Soc 83 1296 1961] dried it vigorously with sodium-potassium alloy until a characteristic blue colour was evident in the solvent at Dry-ice/cellosolve temperatures. The solvent is kept in contact with the alloy until distilled for use. Worsfold and Bywater [J Chem Soc 5234 1960], after refluxing and distilling from P2O5 and KOH, in turn, refluxed the solvent with sodium-potassium alloy and fluorenone until the green colour of the disodium salt of fluorenone was well established. [Alternatively, instead of fluorenone, benzophenone, which forms a blue ketyl, can be used.] The tetrahydrofuran was then fractionally distilled, degassed and stored above CaH2. p-Cresol or hydroquinone inhibit peroxide formation. The method described by Coetzee and Chang [Pure Appl Chem 57 633 1985] for 1,4-dioxane also applies here. Distillations should always be done in the presence of a reducing agent, e.g. FeSO4. [Beilstein 17 H 10, 17 I 5, 17 II 15, 17 III/IV 24, 17/1 V 27.] It irritates the skin, eyes and mucous membranes, and the vapour should never be inhaled. It is HIGHLY FLAMMABLE, and the necessary precautions should be taken. Rapid purification: Purification as for diethyl ether.

Forms thermally explosive peroxides in air on standing (in absence of inhibitors). Peroxides can be detonated by heating, friction, or impact. Reacts violently with strong oxidizers, strong bases and some metal halides. Attacks some forms of plastics, rubber and coatings.

Consult with environmental regulatory agencies for guidance on acceptable disposal practices. Generators of waste containing this contaminant (≥100 kg/mo) must conform with EPA regulations governing storage, transportation, treatment, and waste disposal. Concentrated waste containing peroxides-perforation of a container of the waste from a safe distance followed by open burning.