Ammonium nitrate, is a colorless rhombic or monoclinic crystal at room temperature. It can be decomposed into water and nitrous oxide at 210 ° C. Upon severe heating at 300 ℃ above, it is subject to decomposition into nitrogen, oxygen and water. It is soluble in water, methanol and ethanol. It dissolution in water can absorb a lot of heat and reduce the temperature. It is one of the major nitrogen fertilizer varieties in the world today, accounting for about 3.5% of the total amount of nitrogen fertilizer in our country. The nitrogen form is nitrate, which belongs to the nitrate nitrogen fertilizer. In fact, ammonium nitrate both nitrate and ammonium nitrogen, but its nature is more similar to the nitrate nitrogen fertilizer.
Ammonium nitrate has no residue in the soil; and can be all absorbed by crops; being a physiological neutral fertilizer. Ammonium nitrate is suitable for a wide range of soils and crops but is most suitable for dry and dry crops especially suitable for cash crops such as tobacco, cotton and vegetables.
Ammonium nitrate should not be used as a basal fertilizer, because ammonium nitrate, after being applied to the soil, has its dissociated nitrate ions be easily leached into the soil. At the same time, ammonium nitrate should not be used seed manure because of its higher nutrient content, high hygroscopicity, which will affect the germination upon contact with seeds.
Ammonium nitrate, when applied in paddy field, can have its nitrogen content easily leached. Therefore, its efficiency is not comparable to other nitrogenous fertilizers of equal nitrogen content, being only equivalent to 50% -70% of that of ammonium sulfate with equal nitrogen content. The most ideal application is for topdressing, and is most suitable for top-dressing in dry land. The usage amount can be determined according to soil fertility and yield indicators. Should pay attention to the following points:

Ammonium nitrate (AN) is an odorless, colorless or white, crystal salt produced by the reaction of ammonia and nitric acid. It was the first solid nitrogen (N) fertilizer produced on a large scale. It has been a common nitrogen source because it contains both nitrate and ammonium, and has a relatively high nutrient content. For some crops it is the most environmentally and economically viable N fertilizer.

Ammonium nitrate can be used directly or as an important component of many fertilizer mixtures. It provides a source of nitrogen to plants to increase growth and crop yields. Ammonium nitrate is a popular fertilizer since it provides half of the N in nitrate form and half in ammonium form. The nitrate form moves readily with soil water to the roots where it is immediately available for plant uptake. Ammonium nitrate is more popular than other nitrogen fertilizers for pasture and hay fertilization since it is less susceptible to volatilization or air losses when left on the soil. It is also valued by vegetable growers for its ability to provide an immediately available nitrate source of plant food.

Since plant roots do not directly absorb the urea form of N to a large extent, ammonium nitrate is an efficient and immediate source of plant nutrition. It provides half of the N in the nitrate form and half in the ammonium form. The nitrate form is mobile in the soil water and immediately available for plant uptake. The ammonium fraction is taken up if roots grow nearby or after it is converted to nitrate by soil microorganisms during nitrification.
Many farmers prefer an immediately available nitrate source for plant nutrition and choose ammonium nitrate as their N fertilizer. It is popular for pasture and broad acre crops since almost no ammonia volatilization losses occur, compared to urea-based fertilizers. Some 37 million metric tons (MMt) of fertilizer grade ammonium nitrate are consumed worldwide annually in agriculture, of which about 14 MMt are used as CAN. Because of its high crop recovery, its ease of use, and its suitability for in-season top dressing, ammonium nitrate is widely used, especially in many European countries.

Ammonium nitrate readily attracts moisture from the air, and for this reason, is often stored in air-conditioned warehouses or in sealed bags. Ammonium nitrate is considered non-flammable; a fire from ammonium nitrate is very unlikely. However, it is a strong oxidizing agent that can cause combustible materials (such as wood, paper and oil) to ignite. Only under extreme conditions of heat and pressure in a confined space will ammonium nitrate explode. 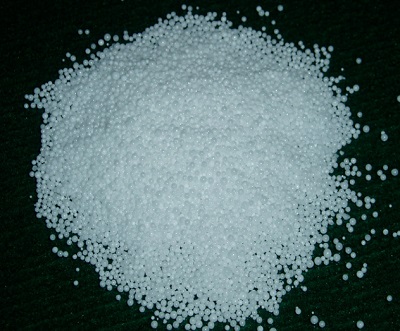 Ammonium nitrate is a very insensitive and stable high explosive used as a slow-burning propellant for rockets when compounded with burning rate catalysts. Although the major applications of Ammonium nitrate are explosives and fertilizers, it is also used in insecticides, rust inhibitors, and pyrotechnics.

Sold in a concentration of 27,5% N. Attributes Distributed by Agroline CH. Contact

Colorless crystals made by the action of ammonium hydroxide on nitric acid. Soluble in water, alcohol, and alkalies, ammonium nitrate is explosive and was used as a substitute for potassium nitrate in making flashlight mixtures.

Ammonium nitrate (NH4NO3, also known as “Norway saltpeter”) is mainly used as a fertilizer. It is also known as the chemical that was mixed with diesel fuel to create the explosion that demolished the Murrah Federal Building in Oklahoma City in 1995.

ammonium nitrate: A colourlesscrystalline solid, NH4NO3; r.d. 1.72;m.p. 169.6°C; b.p. 210°C. It is verysoluble in water and soluble inethanol. The crystals are rhombicwhen obtained below 32°C andmonoclinic above 32°C. It may bereadily prepared in the laboratory bythe reaction of nitric acid with aqueousammonia. Industrially, it is manufacturedby the same reaction usingammonia gas. Vast quantities of ammoniumnitrate are used as fertilizers(over 20 million tonnes per year)and it is also a component of someexplosives.

A colorless crystalline solid. Soluble in water. Does not readily burn but will do so if contaminated with combustible material. Accelerates the burning of combustible material. Produces toxic oxides of nitrogen during combustion. Used to make fertilizers and explosives, and as a nutrient in producing antibiotics and yeast.

Water soluble. Hot aqueous solutions of the nitrate above 50% conc., under confinement may decompose explosively. This process is aided catalytically with such substances as nitric acid and chloride ion, [Chem. Abs., 1982, 97, 78074].

The hazards of AMMONIUM NITRATE have been well studied because of several extremely severe explosions [Chem. Eng., 1962, 70, 91; Bretherick, 5th Ed., 1995]. Mixtures with alkyl esters may explode, owing to the formation of alkyl nitrates. Mixtures with phosphorus, tin(II) chloride or other reducing agents may react explosively [Bretherick 1979 p. 108-109]. A mixture with aluminum powder (also zinc, cadmium, copper, magnesium, lead, cobalt, nickel, bismuth, chromium, and antimony) can be used as an explosive. A number of explosions in which ammonium nitrate and aluminum were mixed with carbon or hydrocarbons, with or without oxidizing agents have occurred [Mellor 5:219 1946-47]. A mixture with acetic acid ignites when warmed, especially if concentrated [Von Schwartz p. 322 1918]. Causes the decomposition of sodium hypochlorite within a few seconds [Mellor 2 Supp. 1:550 1956].

May explode under confinement and high temperatures, but not readily detonated. Ventilate well. To fight fire, use large amounts of water. The material must be kept as cool as possible and removed from confinement and flooded with water in event of fire.

Inhalation, ingestion or contact (skin, eyes) with vapors or substance may cause severe injury, burns or death. Fire may produce irritating, corrosive and/or toxic gases. Runoff from fire control or dilution water may cause pollution.

Used in the manufacture of liquid and solid fertilizer compositions, industrial explosives and blasting agents from ammonium nitrate, matches; antibiotics; in the production of nitrous oxide.

Ammonium Nitrate. Ammonium nitrate is one of the two leading nitrogen fertilizer materials on a world basis: 10% in 1997. The high N content is advantageous for the reduction of freight and application costs per unit weight of nitrogen. The presence of 50% of the nitrogen in the highly available nitrate form makes it suitable for use in regions growing crops with a short vegetation period but has the disadvantage that, because the NO3 ? ion is not adsorbed by soil, it may contribute to relatively large nitrogen losses by the leaching of increased soil nitrate into streams and groundwater. Although the application of any nitrogenous fertilizer results in some degree of soil acidification, the nitrate form is notably less acidifying than ammonium sulfate and has a lower tendency for the loss of nitrogen to the atmosphere as gaseous ammonia. The hygroscopic character of the crystalline material, coupled with its explosive nature, contributes to difficult storage and handling properties and the need for the production of purified and stabilized forms.

A strong oxidizer. Reducing agents; combustible materials; organic materials; finely divided (powdered) metals may form explosive mixtures or cause fire and explosions. When contaminated with oil, charcoal or flammable liquids, can be considered an explosive which can be detonated by combustion or shock.

Pretreatment involves addition of sodium hydroxide to liberate ammonia and form the soluble sodium salt. The liberated ammonia can be recovered and sold. After dilution to the permitted provisional limit, the sodium salt can be discharged into a stream or sewer.