Calcium fluoride is the main ingredient of fluorspar or fluorite, the chemical formula is CaF2, it is colorless cubic crystal or white powder. The relative density is 3.18, the melting point is 1423℃, boiling point is about 2500 ℃. The solubility in water is minimal , 100g water can dissolve only 0.0016g at 18 ℃, it is insoluble in acetone, but soluble in hydrochloric acid, hydrofluoric acid, sulfuric acid, nitric acid and ammonium salt solution, and it can not react with dilute acid, but can react with hot concentrated sulfuric acid and generate hydrofluoric acid, it can form a complex when dissolves in aluminum and iron salts (Fe3 +) solution. 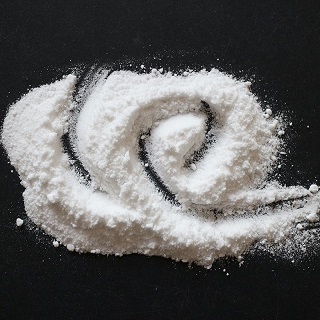 Natural calcium fluoride is mineral fluorite or fluorspar, often shows gray, yellow, green, purple and other colors, sometimes it is colorless, transparent, shiny glass, brittle, and the relative density is 3.01~3.25, it has significant phenomenon of fluorescence. It can be used as the source of fluorine and the material to make hydrofluoric acid system, fluoride; and it can also be used in terms of the manufacture of glass, enamel, glaze. Fluorite is mainly used as a flux in metallurgy, the very pure fluorspar can be used to make specialty lenses. Water when contains (1~1.5) × 10-6 calcium fluoride can prevent dental problems. In addition, it can be used in smelting iron and steel, chemicals, glass, ceramics manufacturing. Pure product can be used for catalyst of dehydration, dehydrogenation. By the effect of soluble calcium salts (calcium carbonate or calcium hydroxide) and sodium fluoride or hydrofluoric acid, ammonium fluoride, calcium fluoride can be obtained.

Calcium fluoride is an ionic crystal with the fluorine anions in a simple cubic array and calcium cations in half of the cubic sites of the structure. The calcium ions can also be thought of as being on an "expanded" fcc lattice with the fluorine ions causing their lattice separation to be 0.39 nm. This representation is shown in the lower diagram. The unit cell has 4 Ca2+ ions and 8 F1- ions.

The fluorite deposits which have been found in china, are main used the mine using underground mining method, or shallow open-pit mining, and underground deep mining, for ore body most tilt vein, the extending is also large. Mining method is based in shallow hole Shrinkage Method based. Mining process sees "phosphate rock." Beneficiation methods have two types generally, the one is raw ore can become qualified ore concentrate by handling select, the second is hand-selected lean ore and tailings.

Calcium fluoride, CaF2, also known as fluorite and feldspar, is a colorless solid composed of cubic crystals. It has a low water solubility, but is readily soluble in ammonium salt solutions. Calcium fluoride is used in the synthesis of hydrofluoric acid and in etching glass.
Calcium Fluoride is not hygroscopic and is relatively inert. It has a sufficiently high resistance to thermal and mechanical shock, and it is easily fabricated into a variety of detector geometries.
Calcium Fluoride has a very low vapor pressure, allowing it to be used in a wide variety of vacuum applications. It is insoluble in water and most organic solvents, permitting radioactive samples in solution to be placed in direct contact with the crystal.
Calcium Fluoride is a transparent material used for detecting γ-rays up to several hundred keV and for detecting charged particles. Because of its low atomic number, the material’s photofraction is relatively small which limits its use in γ-ray spectrometry at higher energies. However, the low atomic number makes Calcium Fluoride an ideal material for the detection of β-particles because of the small amount of backscattering.

Naturally occurring CaF2 is the principal source of hydrogenfluoride, a commodity chemicalusedto produce a wide range of materials. Fluoride is liberated from the mineral by the action of concentrated sulfuric acid:
CaF2 (solid)＋H2SO4 (liq)→CaSO4 (solid)＋2HF (gas)
CaF2 is used as an optical component because of its chemical stability under adverse conditions.Calcium fluoride is commonly used as a window material for both infrared and ultraviolet wavelengths, since it is transparent in these regions (about 0.15 to 9 mm) and exhibits an extremely low-refractive index.
Calcium Fluoride is a water insoluble calcium source for use in oxygen-sensitive applications, such as metal production. In extremely low concentrations (ppm), fluoride compounds are used in health applications. Fluoride compounds also have significant uses in synthetic organic chemistry. They are also commonly used to alloy metal and for optical deposition.
It is also used as a flux for melting and liquid processing of iron, steel and their composites. Its action is based on its similar melting point to iron, on its ability to dissolve oxides and on its ability to wet oxides and metals.

Fluorspar is the main primary source of fluorine and its Compounds. In ferrous metallurgy it is used as a flux to increase the fluidity of the slag. The steel industry is the largest consumer; the chemical industry, second and glass and ceramics, third. Synthetic fluorspar is used in the optical industry (transmits u.v. rays), and pure calcium fluoride is used as catalyst in dehydration and dehydrogenations. Used to fluoridate drinking water.

The commercial product is obtained from naturally occurring mineral fluorspar, which is purified and powdered. Also, it may be precipitated by mixing a solution of sodium fluoride with a soluble calcium salt:
Ca(NO3)2 + 2NaF → CaF2 + NaNO3
Alternatively, it may be obtained by treating calcium carbonate with hydrofluoric acid：CaCO3 + 2HF → CaF2 + CO2 + H2O.

A mineral form of calcium fluoride (CaF2), used in making some cements and types of glass.

Calcium fluoride has weak oxidizing or reducing powers. Redox reactions can however still occur. The majority of compounds in this class are slightly soluble or insoluble in water. If soluble in water, then the solutions are usually neither strongly acidic nor strongly basic. These compounds are not water-reactive.

Also called fluorite, fluorspar is a crystalline or massive granular mineral of the composition CaF2, used as a flux in the making of steel, for making hydrofluoric acid, in opalescent glass, in ceramic enamels, for snaking artificial cryolite, as a binder for vitreous abrasive wheels,and in the production of white cement. It is a better flux for steel than limestone, making a fluid slag, and freeing the iron of sulfur and phosphorus.
Acid spar is a grade used in making hydrofluoric acid. It is also used for making refrigerants, plastics, and chemicals, and for aluminum reduction. Optical fluorspar is the highest grade but is not common. Fluoride crystals for optical lenses are grown artificially from acid-grade fluorspar. Pure calcium fluoride, Ca2F6, is a colorless crystalline powder used for etching glass, in enamels, and for reducing friction in machine bearings. It is also used for ceramic parts resistant to hydrofluoric acid and most other acids. Calcium fluorite has silicon in the molecule and is a crystalline powder used for enamels. The clear rhombic fluoride crystals used for transforming electric energy into light are lead fluoride, PbF2.

Calcium fluoride is used for production of hydrofluoric acid; as a flux in steel manufacture; in smelting; electric arc welding, making glass and ceramics; and to fluoridate drinking water.

Calcium fluoride is not specifically covered by DOT in its Performance-Oriented Packaging Standards.